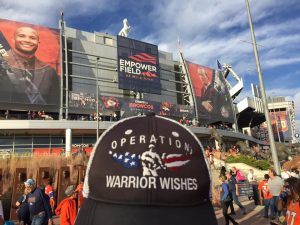 In case you haven’t been following… so far this season we have been honored to make Warrior Wishes come true at 22 NFL games! My dad is racking up some serious miles… 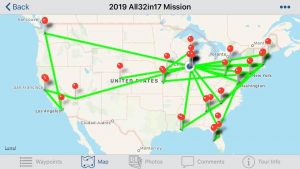 Xander, my dad & I headed towards the airport after my dad watched the grandkids Wednesday afternoon. Literally as soon as we got in the car to go we received a flight delay notification.  So we stopped for dinner and played some Mario Kart at Walmart before dropping him off. His flight, originally scheduled to depart at 8:54pm, didn’t take off until after 1 am! 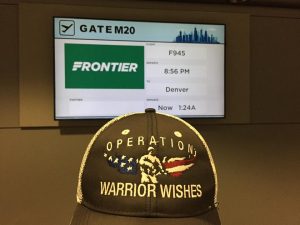 Which means he didn’t arrive in Denver until around 3am. Needless to say, he skipped getting a hotel and got a quick power nap in at the airport before making his way downtown Denver to make some Warrior Wishes come true!

Denver is an awesome city. I’ll never forget our first mission there, my dad and I literally tried to cram in as much as we could with limited time. We made it to Estes Park, the doorstep of Rocky Mountain National Park(didn’t want to tease ourselves because we didn’t have time to explore), Red Rocks Amphitheatre, the Coors Brewery, Coors Field and the Broncos game all in less than 24 hours! It was awesome! 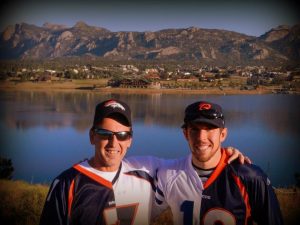 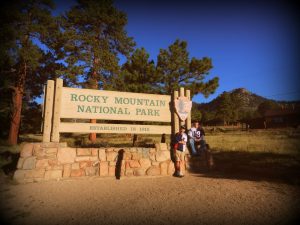 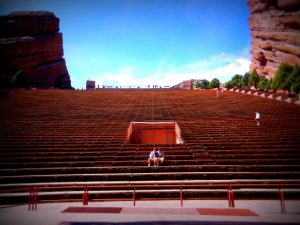 Throughout the years we have made some unforgettable memories making Warrior Wishes come true in the “Mile High” City! Here are some of our favorites. 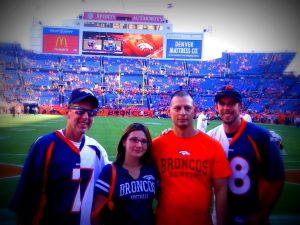 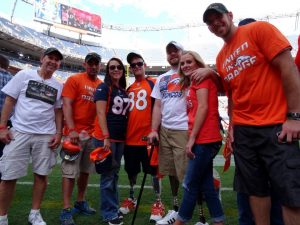 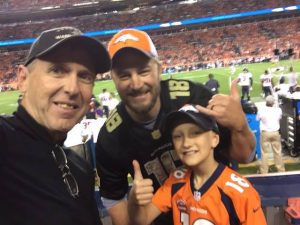 Today we had the opportunity to make some new memories with Army veteran Anthony “AJ” Martinez and Marines Vince Vangi and Terry Lyons at the Broncos game.

AJ Martinez was stationed in Schweinfurt, Germany with the 1-91 Cav, and the 173rd Airborne Brigade. He severely injured his ankle on a predeployment training mission. Today, he and his family live in Aurora, Colorado and he is heavily involved in the Wounded Warrior Project. 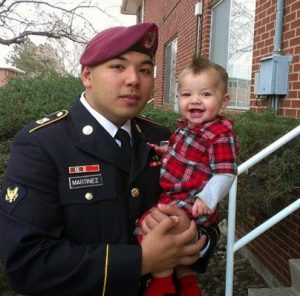 Vince Vangi enlisted in the Unities States Marine Corps reserve in December of 1986 at the age of 20. He graduated from boot camp as a Private 1st Class and worked his way up to the rank of Sergeant before his discharge in 1994. 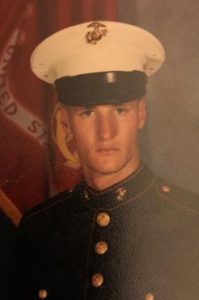 Marine Sgt Terry Lyons comes from a family with a long history of military service. His family has served in all branches of the military excluding the coast guard. Terry enlisted into the United States Marine Corps on December 30th 1963. He deployed to Okinawa Japan at the beginning of 1965 and eventually was sent to Vietnam. 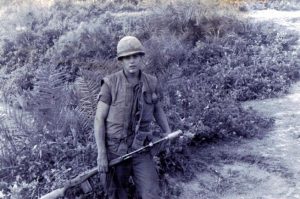 Terry received four Purple Hearts during his time in Vietnam! Two the first year. The first, was a bullet wound to the head. The second was from a grenade that wounded his lower body. Then in 1966 he and his squad received mortar rounds where he took injuries to his arms and face. 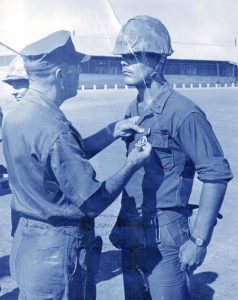 The Marine Corps eventually moved him off of the front lines and he was given orders to the Military Police. While on patrol on Highway 1 a marine air base was attacked and a machine gunner on the perimeter tower was severely wounded so Lance Corporal Lyons started climbing the tower to get him to medical help. As he was climbing he was shot in the leg so received his 4th Purple Heart!

He returned from Vietnam in July of 1966 where he was station at Camp Lejune as the Section Chief for the chaplains office until his discharge from the Marine Corps on December 7, 1967 as a Sergeant of Marines.

Terry’s grandson, Army Pfc Zachary Salmon, made the Ultimate Sacrifice in January 12th 2011 for our country while serving in Afghanistan. 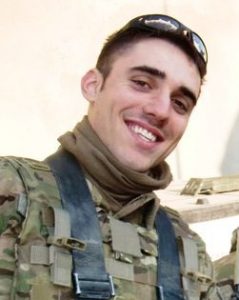 We were honored to host Zach’s mom at a Bengals game a few years back and we are pretty positive Zach was with us too. Look at the orb surrounding his family in this picture! 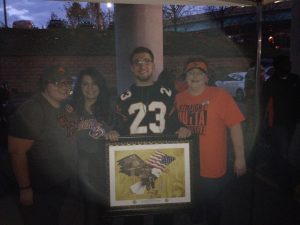 My dad met up with the warriors for dinner at the Denver Chophouse. Mark, the manager of the Chophouse, also served in the Marines. They have been helping us make wishes come true for the past few years and we appreciate their support! 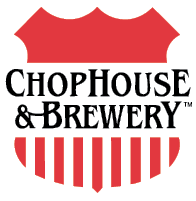 After getting to know one another over a delicious meal, they made their way to the Denver fire department to catch their ride to the stadium! The Denver Fire Department escorted them to the stadium in a fire truck! 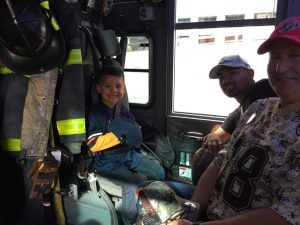 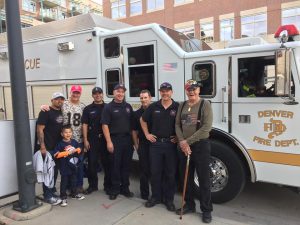 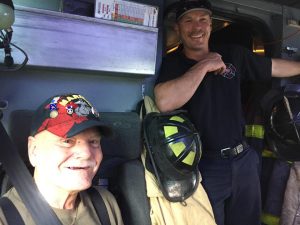 Upon arrival at Empower field, home of the Broncos, the group made their way to tailgate with Rescue Rob and his crew.  Rescue Rob, complete with his own custom Broncos fire truck and his crew have been making Warrior wishes come true at Broncos games since 2012! 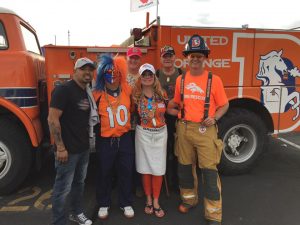 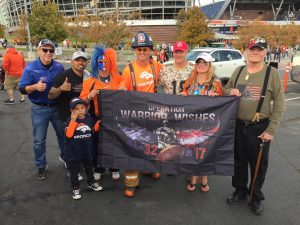 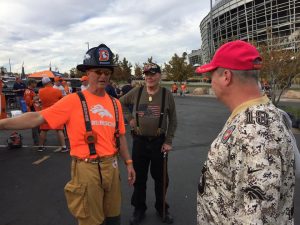 Eventually they made their way into the stadium to watch the Broncos face off against their rivals, the Kansas City Chiefs. 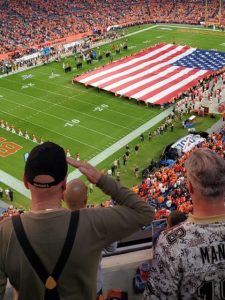 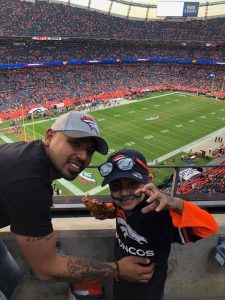 The Broncos marched down the field on their first drive of the game to take an early lead. But unfortunately didn’t score again the rest of the game… the Broncos lay the game 30-6.  Despite the loss, the guys enjoyed their experience.  In AJ’s words “It was absolutely the coolest experience I have ever been a part of!” 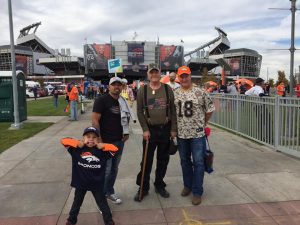 Operation Warrior wishes would like to thank AJ, Vince & Terry for their service and sacrifices and we will never forget Army Pfc Zachary Salmon!

My dad will be back home tomorrow afternoon before catching an overnight bus to Nashville to make wishes come true at Sunday’s Titans game! Stay tuned… 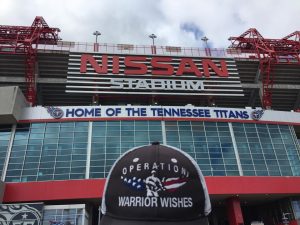