After taking a week off to hang out with family, and learning My Dad is going to have a granddaughter in October… 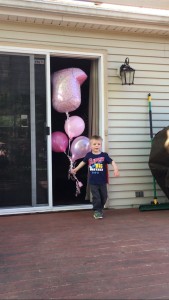 He was back on the road for an 11 day road trip to make Warrior Wishes come true in 10 different cities.  This is the 3rd leg of the Battlefields to Ballfields Tour – hosting and honoring wounded vets and fallen hero families at all 30 baseball stadiums.  So far this Baseball season we have hosted heroes in Atlanta, Boston, Detroit, Kansas City, St. Louis, Houston & Dallas.  Over the next week and a half, my dad will be making warrior wishes come true in Cincinnati, Detroit, Pittsburgh, New York, Boston, Back to New York again, Washington DC, Baltimore, Philadelphia & Cleveland.

Our newest Board Member, Bill Heaton, pickes up my dad around 3:00 AM to get to Cincy in time for brunch, thanks to Moreleins Lager House.  They arrived a few minutes late, but thanks to Andy at Moreleins, Marine Larry Draughn Jr, his wife Katylin and 2 kids , along with Melissa Sluss -Tiller and her 9 year old daughter were seated and ordered before they arrived . 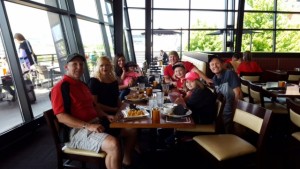 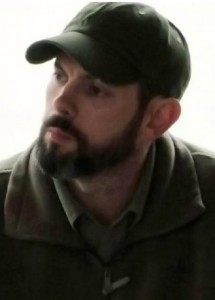 Marine Corporal Larry Draughn was on his second deployment in May 2009 when an improvised explosive device (IED) blast in Helmand Province, Afghanistan caused the traumatic amputations of both of his legs as well as the amputations of two fingers on his right hand. (See CPL Draughn’s full bio below.) 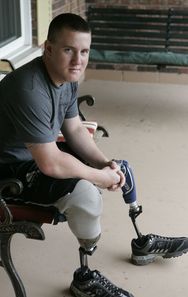 We had a great brunch while getting acquainted.  My dad slipped up & spolied a surprise when he told the waitress we were going on the field before the game.  Needless to say, they were still excited for the opportunity! My dad also set all the New Era Reds caps on the table at lunch and let everyone pick one to wear at the game. 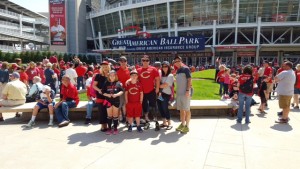 With new caps and full stomachs, everyone walked across the street to “Gappers Alley” at The Great American Ballpark to get escorted on to the field – it was wiffle ball bat day, so the kids got their bats, we headed past the locker room, down the tunnel and onto the field. 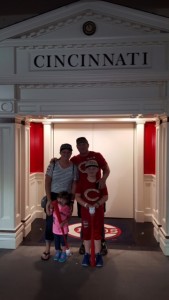 The families felt very special cuz they were the only ones on the field other than staff and players.  We can’t thank the Reds enough for their incredible hospitality from Phylicia (who set it up) to Donovan (who was our guide).  It was an incredible experience! 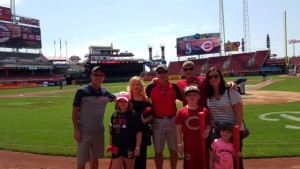 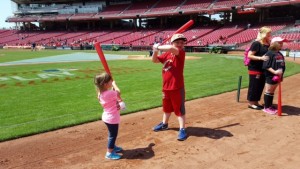 After snapping a few pictures from the field, The Warriors & their families made their way up to their seats.  The Reds brought Gift Bags to them, and probably the most exciting thing for the kids was having the opportunity to announce the lead-off batter on the Jumbotron!!! 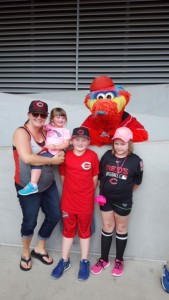 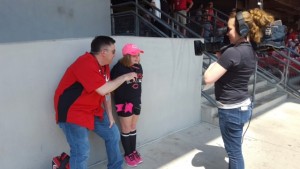 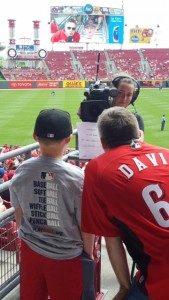 In the words of both families, “this was a great day ” We couldn’t have made it all possible without the Cincinnati Reds who provided a once in a lifetime experience at the game, Moerleins Lager House who provided brunch, New Era Cap who outfitted everyone with new Reds caps.  & Bill for providing transportation and helping us Make these Warrior Wishes come true!  Thank You All! 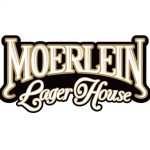 TOGETHER WE MAKE WARRIOR WISHES COME TRUE!
Most importantly, Thank You to the Draughn and Sluss-Tiller families for their service and sacrifices to our country!  Never unnoticed, never forgotten.
Bill and my Dad will be heading north overnight and plan on being in Detroit tomorrow afternoon to make Warrior Wishes come true in Detroit.  Stay tuned for more details!

Sgt. 1st Class Matthew S. Sluss-Tiller was born on Feb. 14, 1974, in Ashland, Ky. He graduated from Lawrence County High School in 1993. He died of wounds suffered from an improvised explosive device in the Lower Dir District of Pakistan’s Northwest Frontier Province, Feb. 3, while deployed in support of Operation Enduring Freedom.

Marine Corporal Larry Draughn was on his second deployment in May 2009 with the 2nd Battalion, 3rd Marines, Golf Company, when an improvised explosive device (IED) blast in Helmand Province, Afghanistan caused the traumatic amputations of both of his legs as well as the amputations of two fingers on his right hand.

Cpl Larry Draughn was on a routine foot patrol of the area around his company’s base camp when an IED exploded under his feet. While cautiously stepping into the footprints of the forward team to ensure there were no bombs in the area, his weight transferred from one footprint to the next, detonating an IED that was buried underneath the barren poppy field he was patrolling. Thrown through the air by the force of the blast, life-saving measures were administered as tourniquets were applied to both of his legs.

Hand-carried by stretcher for more than half an hour to be evacuated, Cpl Draughn was transferred to a waiting Blackhawk helicopter that flew him to Bagram. It was there, over the next few days, that he learned of his amputations and his journey home began. Airlifted to Landstuhl, Germany, Cpl Draughn was next sent to Bethesda Naval Hospital before arriving at Walter Reed Army Medical Center where he received daily therapy sessions.

A native of Dayton, Ohio, Larry is an avid fisherman. He enjoys deep sea and bass fishing and also enjoys fishing in local Paralyzed Veterans of America tournaments. He likes to hunt and is a baseball fan as well.

As he looks toward a career in the future, Larry hopes to one day find employment with the National Security Agency (NSA) where he can apply many of the skills he learned as Marine.

We will be seeing Larry again in a couple months , as he is coming to Chicago to be one of our 36 Military captains of a foursome at our 3rd Annual Warrior Wishes Scramble on Aug 8.  Get more information about the scramble HERE