Tonight Operation Warrior Wishes is proud to honor the ultimate sacrifice made by Army SGT Joshua Harris. Thanks to the Wood Family Foundation We are hosting his father & step mom tonight at‪#‎WoodysWinterWarmUp‬ in his honor.

It was a lifelong dream of Joshua W. Harris’ to serve in the military and he enlisted with the National Guard while he was still in high school.

Don Gillingham, executive director of Walther Lutheran High School, remembered Harris as the kid who always wore a smile but felt a deep sense of purpose.

“He felt like he was doing something important,” Gillingham said of Harris’ military aspirations. “He had that. His life had purpose. His life had meaning.”

Harris, 21, of Romeoville, Ill., was killed Sept. 17, 2008 when his vehicle struck an explosive in Afghanistan.

He was a member of a Boy Scout drum and bugle corps, and continued in the military, often playing taps on the bugle at the funerals of fallen comrades.

“He died in the line of duty doing what he chose to do,” said Harris’ father.

Please help us keep this brave warriors legacy alive and send a message showing your appreciation for his service & ultimate sacrifice. 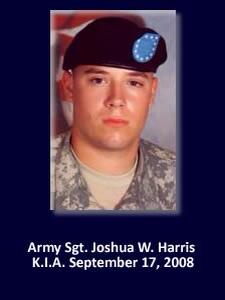