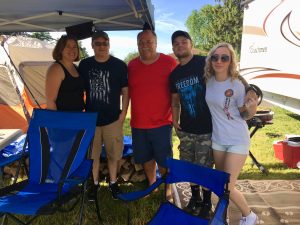 We would like to thank Gary & Mary Denise for providing tickets as well as the Lanzara family for hosting everyone in Indy!

“Bradley epitomized the Marine Corps ethos of the honor, courage and commitment,” wrote Lt. Col. P.D. Waugh in a letter to the family, which was read at Atwell’s memorial service on Sept. 29, 2012. “He lived it every day in the way he looked out for his Marines. You can be sure the Marines who worked and fought beside him will never forget the dedication and sacrifice that he made.”

Staff Sgt. Jimbo Montemayor, who served for a time as Atwell’s superior, said during the memorial service that the incident which made him a hero was his actions on the day he was killed in Afghanistan, when around 15 insurgents dressed in U.S. Army uniforms infiltrated Camp Bastion with automatic rifles, rocket propelled grenade launchers and suicide vests.

“Sgt. Atwell, at the sound of enemy fire, ran and beat down doors screaming at the top of his lungs, ‘Grab your gear, Marines, and let’s go,’” Montemayor said. “He ran towards enemy fire to engage the enemy, as any well-trained sergeant should.

“I’ve seen that intensity numerous times when he was in training,” he continued. “I can almost guarantee that he pursued the enemy without any fear of losing his life. These are the actions of a true hero.” 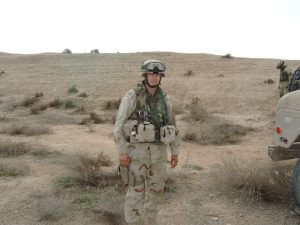 Matthew Mankins is a United States Army combat veteran. He was active duty from October 2003- November 2006. He served as a combat medic with the 3rd Infantry Division. In 2005 he was deployed for 12 months to Samarra, Iraq as part of OIF3. During his time in Iraq he treated multiple injured coalition and enemy forces. He served primarily as a front line medic but also spent time in the forward aid station within the city.

Following his deployment he received an honorable medical discharge from the military.
Since his discharge, he has dedicated his life to using the lessons learned from military medicine to educate paramedics and other first responders. He has served in multiple positions from Lead Paramedic Instructor to most recently an EMS Simulationist. In his current position he strives to create immersive training programs to better prepare today’s first responders.

Today, he lives in Etna, Ohio, with his wife Jessica and two sons, Ethan and Landon.