Warrior Wishes Come True Thanks To The St. Louis Blues!

Just hours after making Warrior Wishes come true at the Chicago Blackhawks game my dad was on a bus heading south to St. Louis to host heroes at the Blues game. 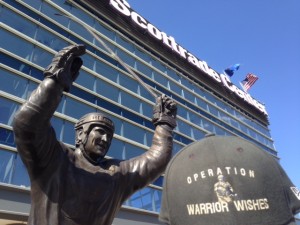 Throughout our mission over the years, we have done our best to stay in touch with the warriors we have hosted in the past & love meeting and hosting new ones along the way .  Today’s was a perfect example of that.

Thanks to the St Louis Blues, my dad was able to host an old friend and make 3 new ones at the Blues game. He hosted Army Sgt Mike Shuster, Jerry, an Air Force veteran & Army Warriors Chris & Brad. 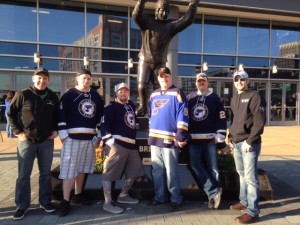 My dad met up with the Warriors at Hard Rock Cafe down the street from Scottrade Center and thanks to General Mgr Tara they were treated to a delicious pregame meal.  The Hard Rock is located at the crossroads of the Missouri and the Mississippi Rivers, in the historic Union Station area. The famous Gateway Arch towers in the distance while Busch Stadium, the Saint Louis Zoo, and the Scottrade Center are just minutes away.  It was the perfect place to get to know everyone before the game. 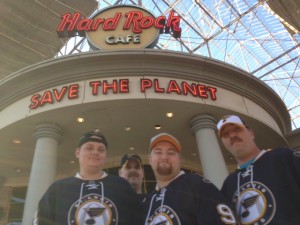 All four warriors we hosted were huge Blues fans.  They werre all decked out in Blues jerseys and enjoyed picking out a brand new Blues cap thanks to our friends at New Era.  My dad loves setting them all out on the tableat once to watch the guys fight over them…. haha. 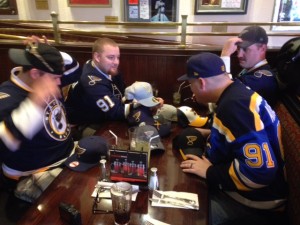 The Blues needed a win to stay in the hunt to win their division.  The guys were treated to some of the best seats in the house, but were not happy watching their Blues fall behind 2 to 0 in the first period.   In the 2nd, they cut the Coyotes lead in half and headed into the final period trailing by 1.  The Warriors had plenty to cheer about in the 3rd period, as the Blues Rallied to score 4 goals and beat the Coyotes 5-2.   The Warriors high fived and celebrated the win.   Needless to say, they had a great time! 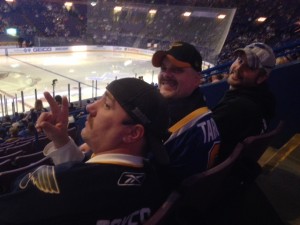 We would like to thank the Hard Rock Cafe in St Louis for the Pregame meal, New Era for outfitting the warriors with stylish new Blues Caps, and the St Louis Blues for providing great seats and an amazing experience to the warriors. 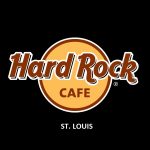