After making wishes come true at the Cavaliers game in Cleveland, my dad jumped on an overnight bus to Pittsburgh for the 2nd game of our mini NBA/NHL tour.

He arrived in the “steel city” at around 5am.  He says “The Pittsburgh Greyhound station is one of the best in the country.”  mainly because it is new and has a great location. 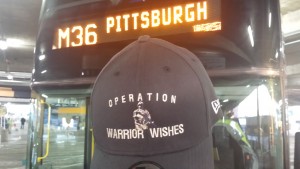 As the sun rose, the city of Pittsburgh started moving. My dad made his way over to the Marriott City Center hotel to thank Morris and his staff for providing accommodations for SGT Kevin Gatson, our guest for the evening. 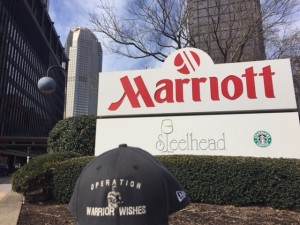 The hotel was conveniently located right across the street from the PPG Paint Center, home of the Pittsburgh Penguins.

Sgt Gatson was not going to arrive until 4pm, so my dad met up with Mike from Mr G’s Sauce, our tailgate sponsor for Steeler games.  He took my dad on a little tour of Pittsburgh, including a stop at the old Pirates stadium, Forbes Field. He also gave my dad a little history lesson on the steel industry. 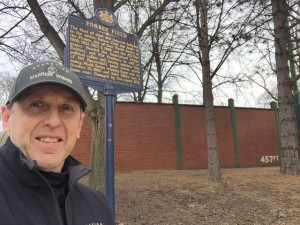 My dad also hoped to meet up with Marine Brandon Rumbaugh, who was our very first Steelers guest in 2012.  Unfortunately, He lives about 40 minutes away & was bartending to raise money for a local military charity.  Brandon is very inspirational young man who does a lot of speaking to kids and veterans.  He is also a huge advocate for homeless veterans. It would have been great to catch up with him.

Snow began to fall around 3:30 which caused some traffic on the roads & caused Kevin to be a little late.  As he arrived at the Marriott, the staff was there waiting to greet him & thanked him for his service. They surprised him a welcome package in his room.  SGT Gatson was impressed with the warm welcome. 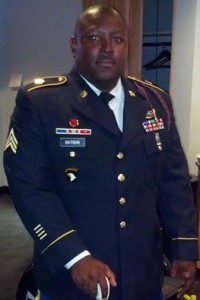 SGT Kevin Gatson was on patrol in the Kandahar region of Afghanistan on July 12, 2010, when he and other troops had to climb a wall in their way. Two teams of soldiers made it over, and Gatson, the first man from the third unit, was just about to clear the barrier when the man ahead of him stepped on a pressure plate and a bomb buried in the wall exploded.  The blast took Gatson’s left leg, left index finger, and his left thumb.  His right leg was nearly destroyed as well. For more than a month after he made it back to Walter Reed, he had major or minor surgeries three days a week, rotating from the operating room to the intensive care unit and back again, he said. He doesn’t know how many operations he underwent.

Sgt. Kevin Gatson spent three and a half years recovering at Walter Reed & now plays sled hockey with the USA Warriors Hockey team! He never gives up & is a true inspiration! 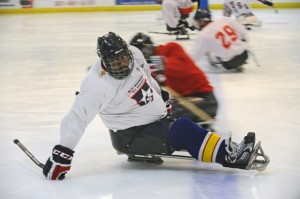 “I don’t feel like I have limitations,” Gatson says. “I feel anything I want to do, I’m able to do. All it takes is me saying I’m going to go do it.”

We have had the pleasure of meeting Kevin in the past, but have never had the opportunity to host him before. We recently treated the USA Warriors hockey team to lunch when they were in Chicago earlier this year. 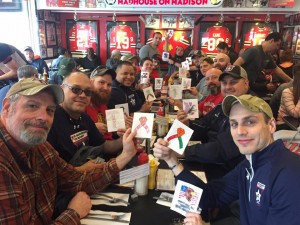 SGT Gatson is a huge Pittsburgh sports fan.  He even has a custom Pittsburgh Steelers prosthetic leg! 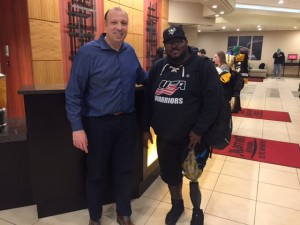 This was SGT Gatson’s first Penguins game in Pittsburgh.  He has seen them play in DC before.  Needless to say, he was excited for the opportunity to see his team play on home ice.

My dad walked SGT Gatson & his friend over to the stadium and snapped a few pictures in front of the stadium before escorting them inside.  They got a green commemorative Penguins T-Shirt since it was St Patrick’s Day. 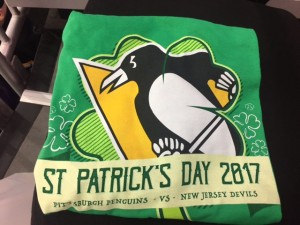 My dad hung around the stadium for a little bit to thank Cathy and the Penguins for helping make us continue to make warrior wishes come true at Penguins games. 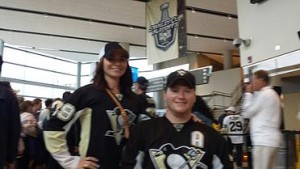 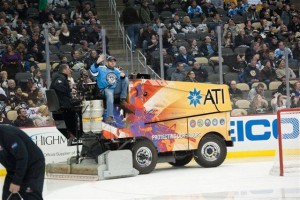 He himself did not have a ticket to the game & hoped to find a scalper to sell him a reasonably priced ticket. Unfortunately, he was not able to get one so just after game started,my dad headed Back to Marriott to watch game.  While walking back a guy sold him a snow soaked ticket that looked like he picked it up off the ground for $10!  Skeptical about the legitimacy of the ticket, my dad bought it & surprisingly it was actually a valid seat!

It worked out perfectly & gave my dad the opportunity to spend a little more time to hang out with SGT Gatson. 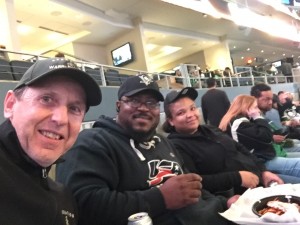 The game itself was very entertaining. with 5 goals scored in first period, the Penguins had a 3-2 lead and went on to win the game 6-4. A great time was had by all!

Most importantly, we would like to thank SGT Gatson for his service & sacrifices.

My dad left the game a few minutes early in order to catch his 10:30pm overnight bus to New York.  He will be in the Big Apple tomorrow to make warrior wishes come true at the Islanders game! Stay tuned for more details.

Click on the schedule to learn more about the mission & nominate your hero.