As a civilian, a few years ago, Memorial Day used to mean a day off of work, BBQ & beers. But now I understand the true meaning of this special day.

While on our mission to host wounded veterans at all 32 NFL stadiums in one season in 2012, a warrior pulled a bracelet off his wrist & presented it to me. He explained that it was a “KIA” bracelet (Killed In Action). The black metal band read; 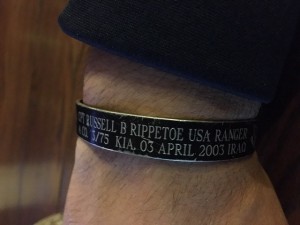 Once I learned the meaning of the band, I immediately returned it back to the warrior & told him I couldn’t accept it. He went on to tell me that if I didn’t accept his offering it would be disrespectful. Followed by “Don’t Disrespect me.”

Then he explained he wanted me to wear the KIA bracelet every day going forward to remind me every day how lucky I am to live in the USA where we have brave men & women willing to fight for our country & even make the ultimate sacrifice to give us the opportunity to live in every moment we get. 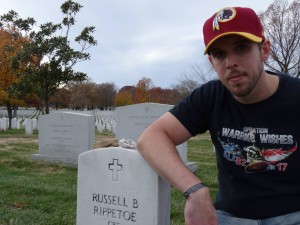 Needless to say, I have never taken it off. Every time I go to DC we make a point to stop at Arlington National cemetery to pay our respect to Captain Rippetoe & all the other brave soldiers who have made the ultimate sacrifice for us. Arlington is a very special place. If you have never been there, put it on your bucket list. 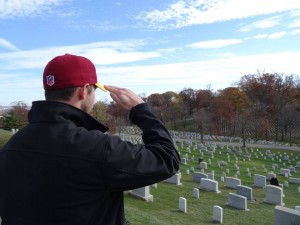 Last year when we were in DC we stopped to tour the Smithsonian American History Museum & got a huge surprise when we saw Captain Rippetoes’ camouflage uniform & gear in the American’s at war exhibit. It brought tears to my eyes & chills ran down my spine. 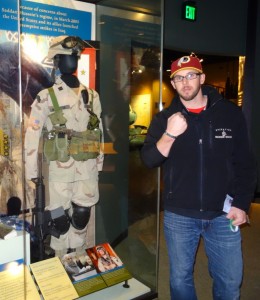 In 2013, we hosted Warriors on a tour of the NFL offices with Gold Star Families. I didn’t know what gold star meant. I obviously know now. The Gold Star pin is a gold star on a purple circular background. Next of Kin Lapel Pins are presented to and worn by immediate Family members of United States Armed Forces members who die while serving outside of combat operations 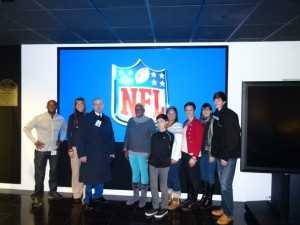 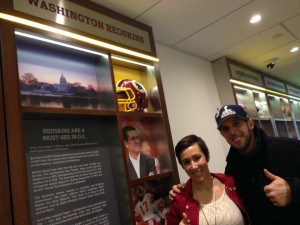 On the tour we met up with Army Master SGT Jen Loredo. Jen not only served our country, she was also a Gold Star wife. Her husband, Army SSG Edwardo Loredo was Killed in action while serving in Afghanistan.

I told Master SGT Loredo about our mission to honor heroes from the battlefields to the Ballfields & Jen asked me if we had ever thought of hosting Gold Star families? 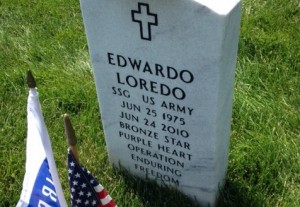 At that time we had never hosted any or even thought about it. But after meeting the Gold Star families on the tour, I was looking forward to hosting them at future games.

Before leaving the tour, Jen reached in her purse and gave me one of Ed’s KIA bracelets (which I now keep in a shadow box displayed along with other bracelets, coins & flags we have received over the years). 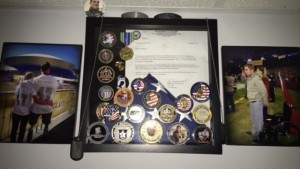 Since 2013, our organization has proudly honored the legacies of more than 150 fallen heroes by hosting their families at events in their honor. Every one of those families have a special place in our hearts, especially during Memorial Day.

The Warriors who have made the ultimate sacrifice are Fathers, Mothers, Brothers, Sisters, Sons, Daughters, Aunts, Uncles, Nieces, Nephews, Cousins & friends. Their loved ones know the true meaning of this day. We want them all to know that their loved ones service & sacrifices are not unnoticed & never forgotten. You will all be in our prayers.

So yea, I still have the day off work, I still plan on having a BBQ & an ice cold beer, but I will be taking time to reflect on the brave men & women who have made the ultimate sacrifice to give me the freedom & opportunity to live here in this moment in the greatest country in the world.

In the words of President Harry S Truman
“Our debt to the heroic men and valiant women in the service of our country can never be repaid. They have earned our undying gratitude.”

“I’m proud to be an American where at least I know I’m free. And I won’t forget the men who died, who gave that right to me.”
~Lee Greenwood

No matter what you do today, please make sure to take a moment to reflect on the true meaning of today! Enjoy your Memorial Day!