For the 62nd time this season we are making Warrior Wishes come true at an NFL game!

My dad was honored to host 3 Marines at last nights Bears game. Immediately after the game he hopped on his $1 overnight bus to Minneapolis and is making wishes come true for the 2nd time this season at a Vikings game! 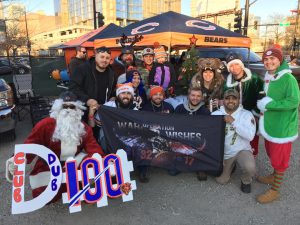 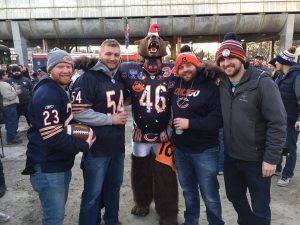 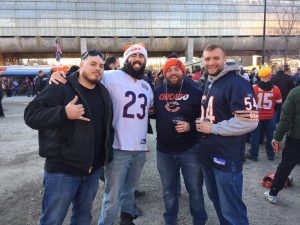 The Vikings and the Packers have both clinched a playoff spot this season, but the 2 teams are battling each other for the NFC North division title.  Today we had the honor of hosting Army SSG Nate Besmer and his wife at US Bank stadium in Minnesota.

SSG Nate Besmer served in the army from 2002-2011. He deployed on 3 tours to Iraq and is a Purple Heart Recipient. Nate is a huge Minnesota Vikings fan and was thrilled for this opportunity to see his team play in their new home (US Bank Stadium) for the first time!

Before meeting up with Nate, my dad met up with Army SSG John Kriesel for lunch at Buffalo Wild Wings. 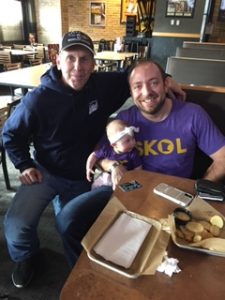 John served our country for 10 years. In 2006, he lost both legs in an IED attack while serving in Iraq. Today he is a motivational speaker and an inspiration! We had the honor of hosting SSG Kriesel at the Super Bowl 2 years ago. My dad enjoyed catching up with him.

My dad met up with Nate and his wife later on in the day. They stopped by the Viking World Order tailgate before heading inside to see the Packers and Vikings battle for the NFC North division title! 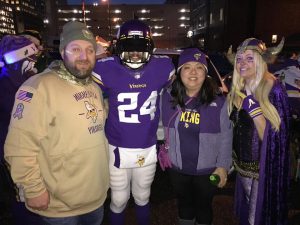 Unfortunately for Nate and all the Vikings fans, Aaron Jones singlehandedly beat Minnesota on the ground. He rushed for 154 yards and 2 touchdowns! The Vikings fell to the Packers by the score of 23-10.

Thankfully they are still guaranteed a spot in the playoffs.

Operation Warrior Wishes would like to thank SSG Besmer for his service and sacrifices. 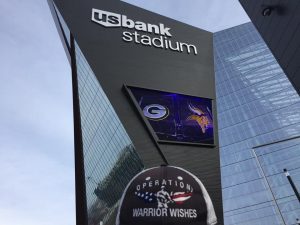 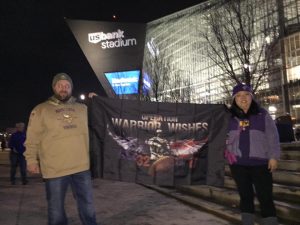 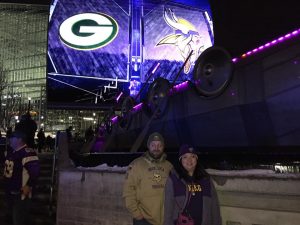 My dad is heading home to spend Christmas with the family before making his way to Kansas City for his final regular season game of the 2019 NFL season. Stay tuned…