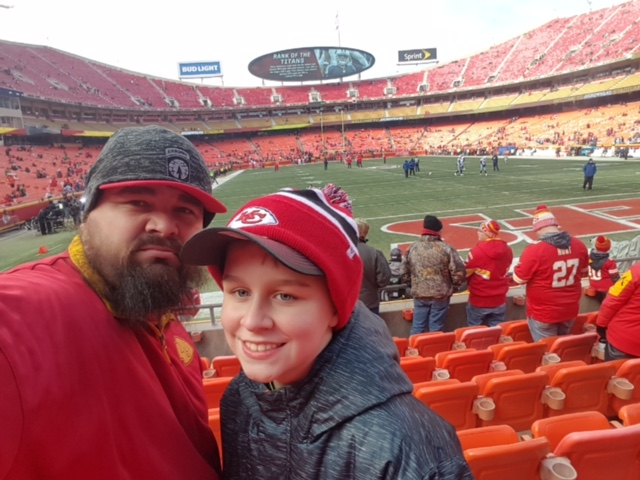 After making wishes come true at 48 NFL games this season, it’s time to kickoff the postseason!

My dad assumed that his travel itinerary would get a little easier once the regular season wrapped up. However, over the next 10 days, my dad will be making Wishes come true in Kansas City, Chicago, Columbus, Philadelphia, Pittsburgh & Cleveland! 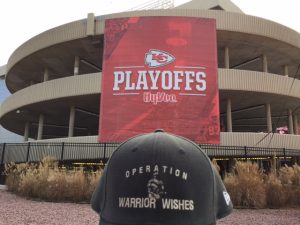 He made his way to KC via overnight bus in the below zero temps on Friday night. Unfortunately the heat stopped working on the bus while heading towards St Louis, thankfully he switched busses on the way, but the cold ride made for a long ride… 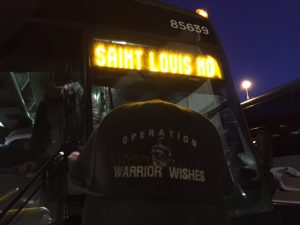 Upon arrival in Kansas City, my dad took an uber to the stadium to meet up with our guests for the day, Army Sgt Preston O’Neal and his 12 year old son Preston IV.  Our friend Don Munce, who has been making Wishes come true for the past few years, once again hosted everyone at his tailgate before the game. 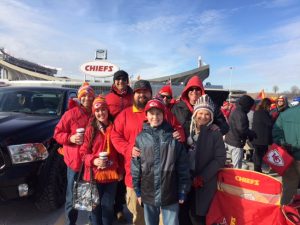 Everyone enjoyed getting to know each other over some delicious food and drinks before the game.   Sgt O’Neal shared with my dad that he proudly served our country for 16 years as Military Police Officer. He retired after 4 deployments and it was very clear, to my dad, that his son was glad to have Dad home for good now!  Sgt O’Neal’s wife also served our country, that’s how they met.  Both he and his son were HUGE Chiefs fans! 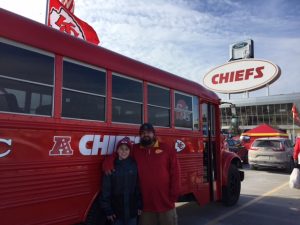 Before escorting the father & son into the stadium, my dad presented them with new Chiefs caps courtesy of New Era, thank you letters from some students & he surprised them with 6th row seats!  Not only did they personally tell me how excited they were, but even Sgt O’Neal’s wife back home told us via Facebook.

The Chiefs jumped out to an early lead giving the O’Neals a lot to be excited about.  Unfortunately, Travis Kelce took a shot to the head placing him in the concussion protocol.  Despite losing one of their best players, the Chiefs took a 21-3 lead into halftime & looked as if they would cruise to an easy playoff victory. 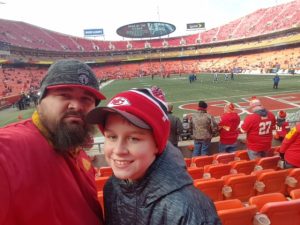 But the 2nd half was a different story…  the Chiefs were shutout.  The Titans held the Chiefs to 51 yards of total offense and won 22-21 to complete one of the wildest playoff comeback wins in NFL history.  Although disappointed with the final score & outcome of the game, Preston and his son enjoyed their father-Son Chiefs experience! It was an honor to host them. 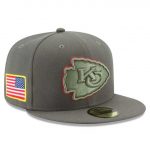 Most importantly, we want to thank the O’Neal family for their service & sacrifices to our country!

My dad will be back on the overnight bus to Chicago to host a terminally ill Vietnam Veteran at the Blackhawks game before making his way back home.  Stay tuned for more details! 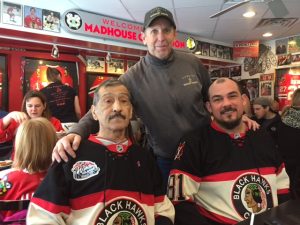