My dad had the pleasure of meeting “Tailgate Ted” a few weeks ago when he made wishes come true at the Redskins game.  Ted is an ultimate Redskins fan who recently had his tailgate van customized by the TV show “Tackle My Ride.” 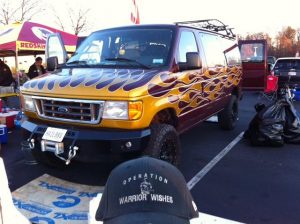 Ted has missed a total of 1 Redskins game since he became a season ticket holder in 2001.  He gets there early before every game to meet up with his HailBBQ crew and hosts epic tailgate parties before each game.  Ted also loves to give back.  Recently he noticed more and more empty seats at FedEx field & he wanted to do something about it.  Ted Reached out to the Washington post & published an article recommending people donate their tickets to organizations like ours to give deserving veterans the opportunity to attend the games, if they were not going to go themselves.

Overall, we received multiple ticket donations & were able to host a large group of warriors and their families at Sunday’s game!  And of course, Ted offered to host everyone at the HailBBQ tailgate! 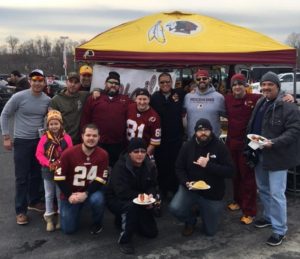 We cannot thank Ted enough for his support and call to action.  We are also very thankful to all of the people who donated tickets to give us the opportunity to host all of these warriors!

We look forward to hosting more at next weeks game!  If you have tickets you are not going to use and would like to donate, we will find a veteran & their family to fill the seats.  Please contact us Matt@warriorwishes.org.

Thank You For Your Support