My dad headed south to Dallas to kick off week 13 in Dallas on Thursday night for our 38th game this season!

It’s been another year filled with amazing new friendships & unforgettable memories!  We cannot thank everyone who has helped us all season long enough!  We couldn’t have made these wishes come true without your support!

Over the years we have made some unforgettable memories making Warrior Wishes come true in the “Big D.”  Here are some of our favorite moments. 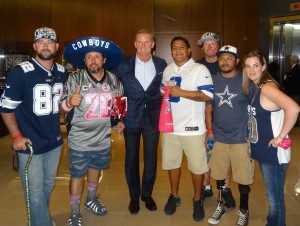 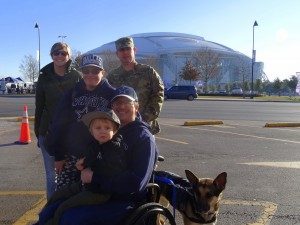 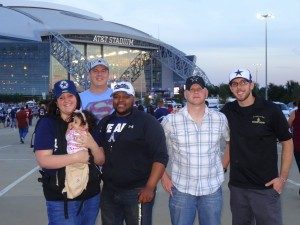 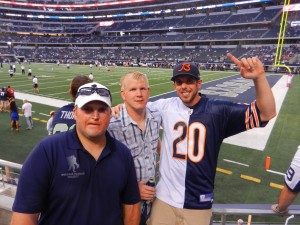 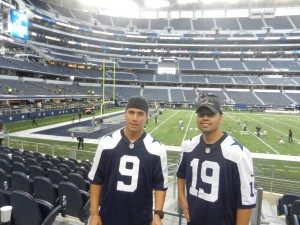 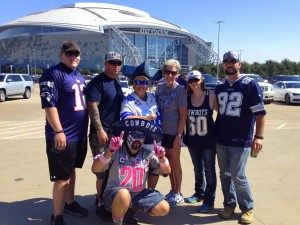 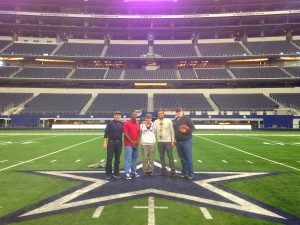 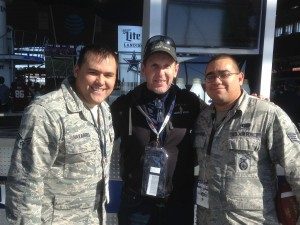 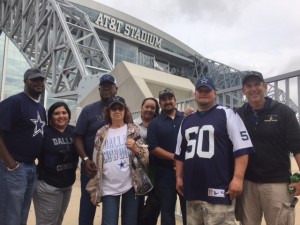 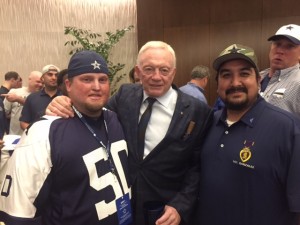 We receive more nominations for cowboys games than any other team in the NFL.  For all of you who submitted nominations for the cowboys, we have not forgotten about you & will keep you on our list for future games.  We hope to work with the Cowboys next season to make wishes come true at every game throughout the 2018 season.  So we will be in touch.

This week’s Cowboys Experience actually started last Sunday.  Sgt Jeffrey Merrick’s wife pulled off a very well planned surprise at their Sunday church services in New Braunfel Texas. His wife had informed him that he had to travel to Dallas for a “Leadership Conference” and for the last month that is what he planned for. However this Sunday his pastor called him and his wife up to the front of the church & he was surprised to find out instead of the conference, he would be seeing conference rivals face off against each other at AT&T Stadium! 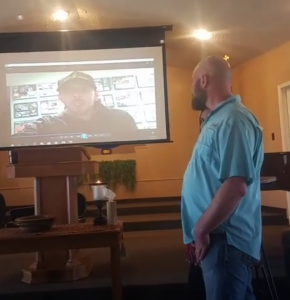 Unfortunately our friends in Dallas were not tailgating at the Thursday night game, so we went back to our roots and met up with the warriors at Whole Foods for a quick meal before the game. 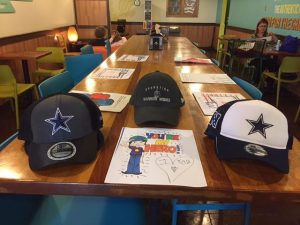 Sgt Merrick and his wife Dawn were first to arrive.  My dad enjoyed getting to know them & they shared a good laugh about the church surprise.  Next to arrive was Jason with his mother in law,  Followed by Ken with 11 year old son KJ (Ken Jr) decked out in their Redskins gear.

Everyone enjoyed getting to know each other over dinner at Whole Foods.  My dad presented the warriors with thank you letters from the kids at Clinton elementary & New Cowboys caps courtesy of New Era. 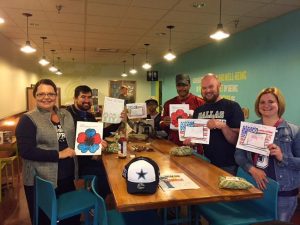 After dinner, the group made their way across the street to the Fire Station.  Our friends at the Arlington fire department surprised the warriors & offered to take them to the game in style.  For the 4th straight year, they drove everyone to the stadium in a fire truck!  We can’t thank Captain Eddie & Captain Mark enough for providing that unforgettable experience! 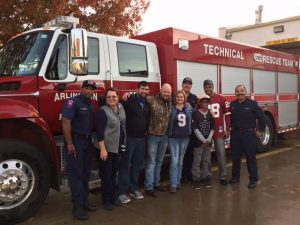 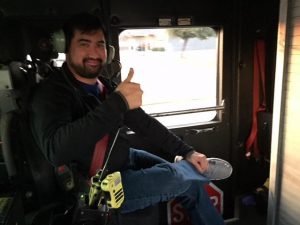 Funny story, While walking into Whole Foods, Jason saw them washing the fire truck next door & joked they were cleaning it up to escort him to game. Little did he know, he really was riding on the fire truck to the game.

As always, my dad made sure to get a great group picture in front of the stadium before heading inside to see the Redskins & Cowboys kick off week 13 of the NFL season! 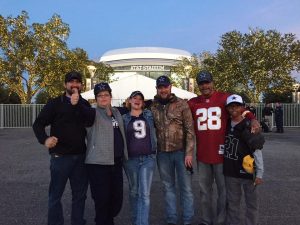 He warriors enjoyed front row seats in the upper deck & had a great unobstructed view of the field & massive Jumbotron! 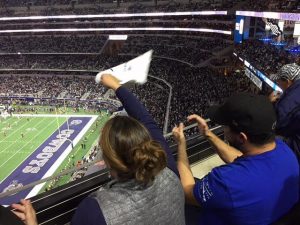 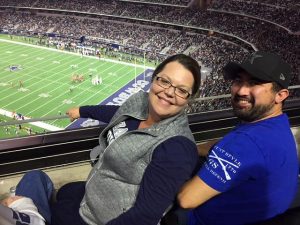 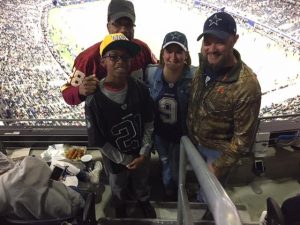 Jeff & Jason had a lot to be excited about.  They cheered their team to victory.  Meanwhile Ken & KJ watched their team fall to the Cowboys 38-17.  Despite their team losing, they still enjoyed he father & son experience!

Although the game had ended, the experience wasn’t over.  Thanks to the Cowboys, Zack Martin & Brett Bech, the warriors were invited to meet some of the players after the game in the exclusive “Landry Room.” 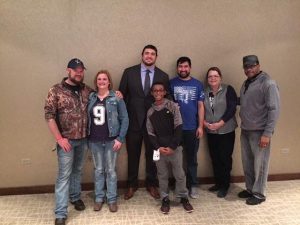 AT&T stadium is one of the most amazing stadiums in the NFL.  It’s a billion dollar venue with some amazing characteristics.  One of the most amazing parts of the stadium is the Landry Room.  It’s an ultra lavish post game hangout for friends and families of the Cowboys players and coaches.  There is delicious food available,  top shelf drinks & a relaxed atmosphere.

Morgan Martin, Zack Martin’s wife, was an awesome host.  She made sure the warriors were well taken care of & introduced them to Zack & other Cowboys players & coaches.  They even got to take selfies with future Hall of Fame Tight End, Jason Witten!  Jason is one of the best to ever play he game.  On top of that, he does amazing things off the field as well! 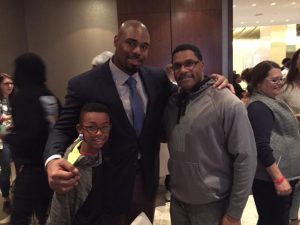 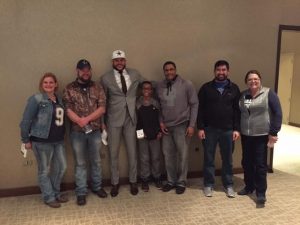 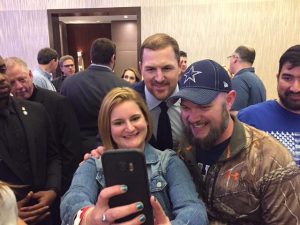 After an incredible night to remember, the warriors were escorted back to their cars by the fire department just before the clock struck midnight & the calendars turned to December.

Operation Warrior Wishes would like to thank Morgan and Zack Martin, Coach Beck and the entire Dallas Cowboys Organization for their incredible hospitality!  We also want to thank New Era Cap for outfitting the guys with new  Cowboys caps, Whole Foods for providing the delicious pregame meal & the Arlington fire department for providing an awesome ride to the stadium.

Most importantly we want to thank the warriors for their service & sacrifices!

The next 2 weeks will be my dad’s craziest stretch of the year…  after the game in Dallas, he made his way to the bus station where he hopped on an overnight bus to Houston.  From there he will catch a connecting bus to New Orleans.  He’s making Wishes come true at the Saints game Sunday, then flying to Cleveland Sunday evening, catching an overnight bus from Cleveland to Cincinnati and will be hosting heroes at the Bengals game on Monday! 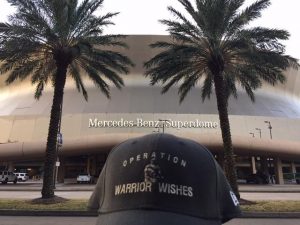 The following week doesn’t get any easier.  He will be making stops in Atlanta, Washington DC, Philly, Charlotte, Jacksonville & Miami!  It’s pretty amazing what my dad will do to show his appreciation to the brave men & women who have selflessly served our country.  But it’s nothing compared to what they have done for us.