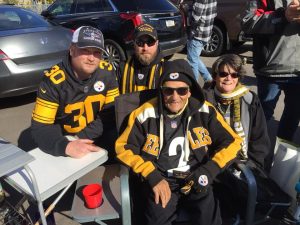 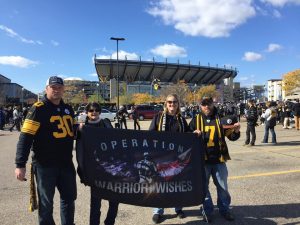 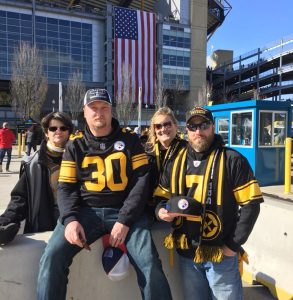 Our friend Don and his tailgate crew was hosting Army SPC Rodney Price and Army Sgt James Wilson and helping us make Warrior Wishes come true at the Chiefs game! 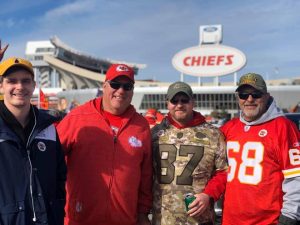 Army SPC Rodney Price served with Kansas National Guard. On October 12th, 2006, while on deployment in Iraq, SPC Price was seriously wounded in a mortar attack. He sustained shrapnel injuries to both legs, lungs & heart. He also suffered a Traumatic Brain injury (TBI) & now battles PTSD. Rodney was medically retired in October 2012. According to his wife, who nominated him, “He is the biggest fan of sports I have ever met.” It’s an honor to make this Warrior Wish come true! 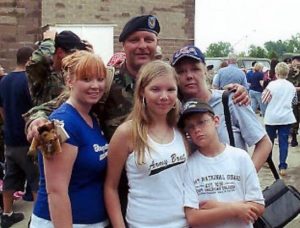 Army SGT James Wilson is one of the most inspiring people I have ever met. He has literally been thru hell. James has been blown up twice, shot twice while in Iraq in 2004, and he suffered 3rd degree burns over 50 percent of his body. 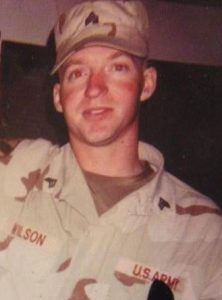 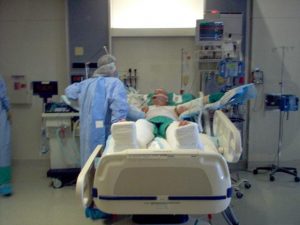 While deployed to Camp Taji, Iraq, in 2004, Wilson was wounded by an improvised explosive device, then provided aid to other wounded soldiers for 12 hours before seeking medical attention for his own injuries.

James retired from the Army in 2006 due to his injuries. Since then, he has devoted his life to his daughter, volunteering with various veterans’ charities, and supporting his community.

We had the honor of hosting James in Kansas City back in 2012. I’ll never forget how he introduced himself to us. “James Extra Crispy Wilson, I’m not quite original recipe anymore…”. 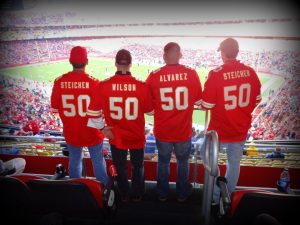 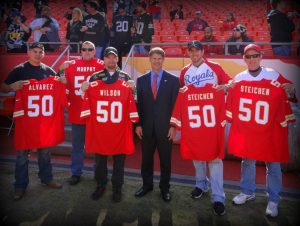 I was amazed at how positive he was after all the negative he had been thru. I remember asking him how he has such an amazing attitude and his response changed my life.

James explained how we control our attitudes. We all go thru negative experiences in life, but there is always something positive to focus on. He said he always focuses his energy on the positives and if you do that, it will help pull you thru the negatives. I will never forget the life lesson he thought me that day.  It’s always an honor to show him how much he is appreciated! 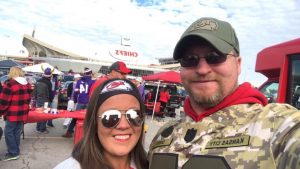 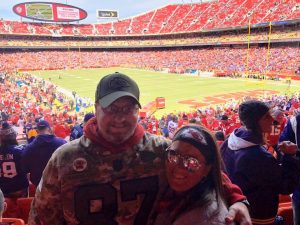 SPC Price and SGT Wilson enjoyed cheering their Chiefs to a last second win over the Vikings! 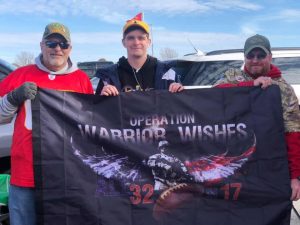 Operation Warrior Wished would like to thank Rodney and James for their service and sacrifices!

My dad will be on an overnight bus tonight from Pittsburgh to New York and back in action tomorrow at the Giants game. Stay tuned… 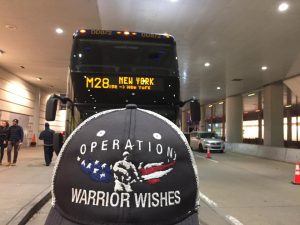