We receive hundreds of nominations throughout the year & do our best to try to make every wish come true.

Over the past 4 years it’s become a Warrior Wishes tradition to host warriors on thanksgiving day. 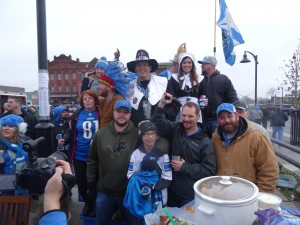 This year we received a nomination specifically for the Thanksgiving game in Dallas.  With my dad already committed to make warrior wishes come true at the Lions game, we had to make a decision. 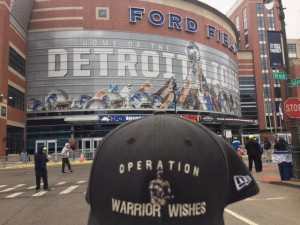 We typically don’t like just sending tickets to warriors and sending them to a game on their own for a couple of reasons.  The biggest reason being that our mission is about creating an experience.  It’s more than just a game, we want to help create memories that will last a lifetime.  Another reason is that for warriors who have never been to a game before, it can sometimes be overwhelming so we like to have a representative there hosting to make sure everything goes smoothly. We also think it’s important to meet the Warriors in person.  We want to show them that they are appreciated through our actions.  Every board member on our team is passionate about about supporting our nation’s veterans & we think it’s important to show that passion in person to create a friendship.  Going to a game with Operation warrior wishes is so much more than just a game. 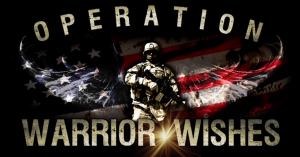 In the end, we made the decision to make this thanksgiving wish come true.  It was an opportunity for us to get a warrior off his couch and out to a game.  Plus it was Thanksgiving!  So we had to show we were thankful for SGT Robert Armstrong’s service!

SGT Armstrong was born in El Paso, Texas in 1965. His dad worked for the Defense Missile Program at White Sands. Eventually he moved to New Jersey, where he saw his first football game on TV. (which is when he became a Redskins fan.) The only games they got were the Giants or the Jets. One day, the Redskins were playing the Giants and his mother said He took to the team right away. From that point on, he has been a Redskins fan. (through the good times and the bad.)   He says “Just about everyone in my family is a Cowboys fan so I was always stuck watching the Redskins on the tiny black and white tv in the back room.”

After graduating from high school in Cedar Hill, Texas Robert joined in the Marine Corps and was stationed out in California. It was during this time that he got to see his first in person Redskins game. SGT Armstrong had saved up a lot of money for the Super Bowl game between Washington and Denver down in San Diego. He was in the nose bleed section, but He loved it. 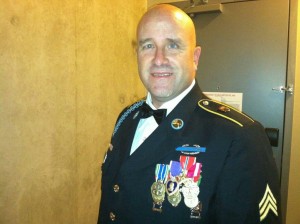 After the Marine Corps He worked in the civilian sector for about ten years but by 1999 the desire to return to military service was too great and He enlisted in the Army in May of that year.

Armstrong spent that summer in Georgia at Fort Benning, relearning military stuff. His first permanent party duty station was in S. Korea. He later deployed to Iraq with 4ID for OIF 1 and 2. 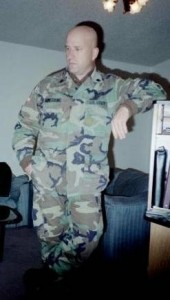 In 2003 while serving in OIF 2 Sgt Armstrong was wounded while guarding a Women’s and Children’s hospital. He was medevaced to Lansthul, Germany.  Once they had him stabilized enough to fly, Robert was sent to Walter Reed in Washington, DC. When he finally woke from his coma, he learned that he had lost his right foot (above the ankle) and was losing the sight in his left eye. (Shrapnel had traveled through his eye and in to his brain.) He would later lose the eye completely and had his right leg amputated above the knee. 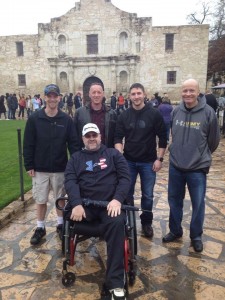 SGT Armstrong returned to active duty and served for 18 more months after his catastrophic injury before finally retiring in January of 2005.

As you can see, he is a big time Redskins fan.  He currently lives in Texas & when he saw the Redskins were coming to town on Thanksgiving, He hoped to get tickets.

However with the Cowboys playing great, this was a tough ticket to get…

I called SGT Armstrong’s wife about a week before the game & introduced myself.  She immediately broke into tears and thanked us for the opportunity to go to the game.  She also told me that we were truly making a dream come true.

Thanks to our friends, Julio “Prime” Marin & other Dallas PFUFA super fans, the Armstrong’s were welcomed (even though SGT Armstrong was a redskins fan) to a fun pregame tailgate filled with delicious food & drinks. 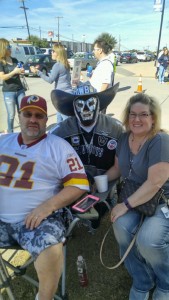 Robert & his wife said they all became quick friends & had a great time tailgating with the whole group. 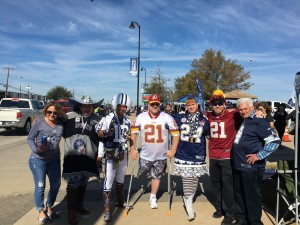 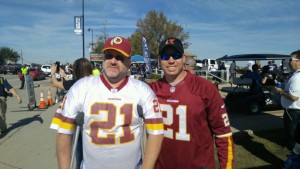 I was able to score front row tickets on an aisle in the upper deck for a reasonable price on stubhub.  I told them they could switch them out for ADA seating when they arrived at the stadium if they were not accessible enough for Robert.  But he chose not to pass up the front row tickets. 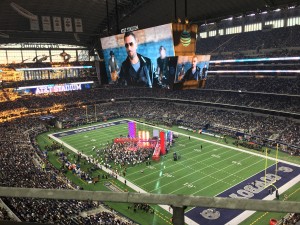 Unfortunately for him, the first place Cowboys beat the Redskins by the score of 31-26.

Despite the loss, SGT Armstrong & his wife had an unforgettable day and “Really enjoyed every second of the day.” 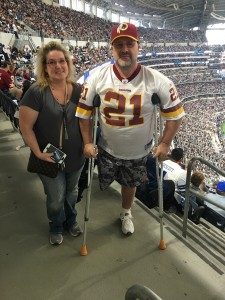 We are thankful to have had the opportunity to send him to the game to show our appreciation for his service & sacrifices!

Operation Warrior Wishes would also like to thank Julio & the Cowboys PFUFA super fans for helping us make this a special experience!

My dad will be back in action this Sunday in Atlanta!  Stay tuned for more details. 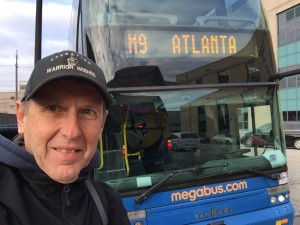