After hosting a group of warriors at the Carolina Panthers game… 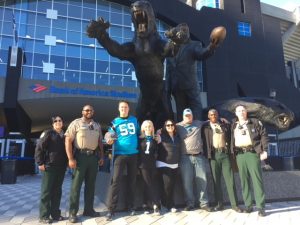 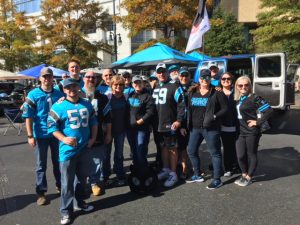 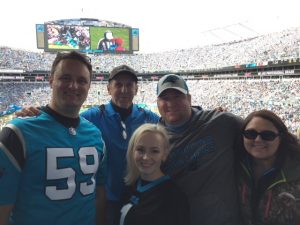 My dad made his way to the Charlotte airport to get a good night sleep before his 9am flight to Dallas. 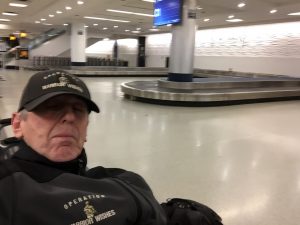 He spent a majority of the morning finalizing some last minute details and working on future events before jumping on the Tri-rail to catch a bus to Arlington, TX.

Today my dad was in the big D making Warrior Wishes come true for a large group of warriors at the Dallas Cowboys game. 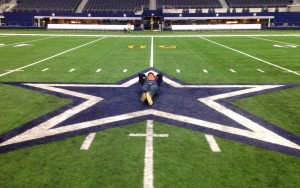 Upon his arrival in Arlington he stopped to visit our friends at the Arlington fire department. Captain Eddie Saldivar has been helping provide unforgettable experiences since 2013! Eddie & his crew invited the warriors to park at the station and offered to provide transportation to the stadium via fire truck!

As you can imagine, we get hundreds of nominations every year. And there are very few teams that get as many nominations at the Cowboys. Typically we host 2-4 veterans per game, but because we had so many outstanding Cowboys nominations plus it was the Salute to Service game, we decided to invite a larger group to the game.

While waiting for the group to arrive, my dad walked over to the stadium to help our friend Julio “Prime” Marin set up his tailgate. Julio is a Cowboys super fan. He & his group of super fan friends have been hosting & helping make Wishes come true for years!

We reached out to him early in the week to let him know that we had a big group coming this year & he was more than happy to accommodate the entire group! We are truly thankful for his support!

Once the tailgate was set to go, my dad headed back to the fire station to meet the warriors.

One by one they all arrived & were greeted by my dad & the Arlington fire department crew. Before being escorted to the tailgate via fire truck, the group snapped this picture to document the experience. 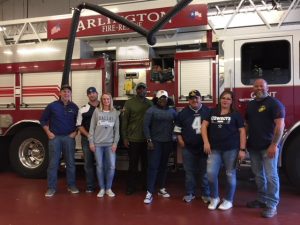 Julio & his tailgate crew were there awaiting their arrival. The gave the warriors a heroes welcome and the group enjoyed a few hours of great food and fun at the tailgate! Everyone loved Julio’s signature Jalepeno bacon poppers! 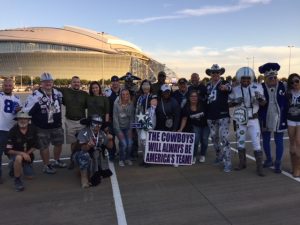 After presenting everyone with new Cowboys caps, courtesy of New Era, and distributing the tickets, the group took a few pictures in front of the stadium and made their way inside to see the Titans & Texans kick things off on Monday night football! 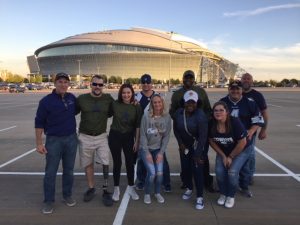 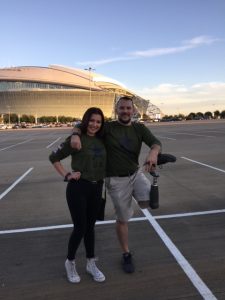 The Warriors, who were all die hard cowboys fans enjoyed watching their team take an early 14-7 lead. However, the Titans D shut the Cowboys down and didn’t allow them to score again for the rest of the game! The Titans went on to win the game 28-14.

It was not the outcome everyone had hoped for, but an unforgettable experience nonetheless. And their experience wasn’t over yet….

After the game, the group headed down to the exclusive “Landry Room.” Where many the Cowboys players & their families hang out after the game. A few of the warriors got to meet some of the players & Coaches! 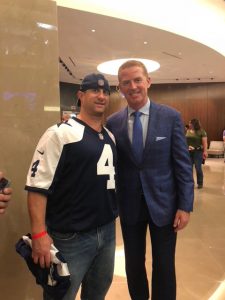 All in all it was another great Cowboys experience and we couldn’t have made it possible without Cowboys Lineman Zack Martin and his wife Morgan for the providing tickets to the game, and to Coach Bech for once again providing the Landry Room Passes. Thank You!

We also want to thank Julio “Prime” Marin and his tailgate crew once again for their good food and incredible hospitality!!!

My dad will be heading home for a couple of days to catch up before heading back out to Pittsburgh on Thursday to make Wishes come true at the Steelers game. Stay tuned! 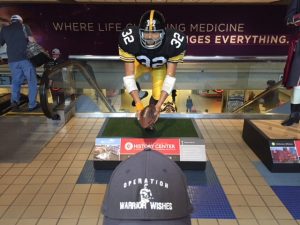