We kicked off week 8 Making wishes come true in Baltimore at the Ravens game, the 24th game of our 2017 “All32in17” mission. 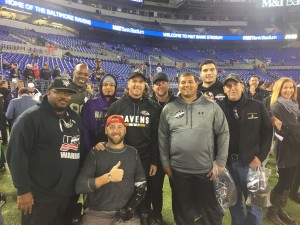 My dad got flew home Friday morning & was back on the road Saturday to get ready to host warriors in Buffalo on Sunday morning. 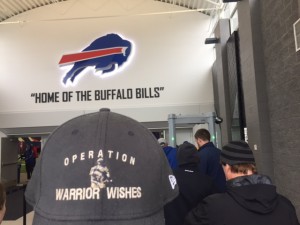 He was looking forward to making more once in a lifetime memories today with Army SGT Mark Thompson as well as Air Force Veterans Claire & Matt Carrell (husband & wife).  My dad arrived in Buffalo late Saturday evening after getting a couple of hours of sleep at the airport before heading out to New Era Stadium meet up with the warriors for breakfast Danny’s south restaurant. 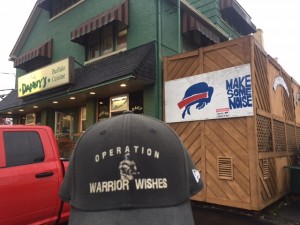 Danny’s south has been helping make wishes come true in Buffalo for the past few years.  They serve delicious food in a casual atmosphere. Located just outside New Era Stadium in Orchard Park, Danny’s is the spot to be before during & after all Bills games!  Army Sgt Mark Thompson and his wife were the first to arrive.  They enjoyed breakfast while waiting for Air Force veterans Matt & Claire Carrell to arrive. 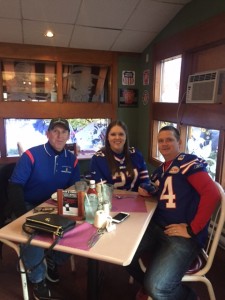 After brunch they headed over to the Hammer Lot to tailgate with some Ultimate Bills fans – Pinto Ron, who hasn’t missed a Bills game in years and cooks food on his old Ford Pinto, along with Captain Buffalo & Pizza Pete. 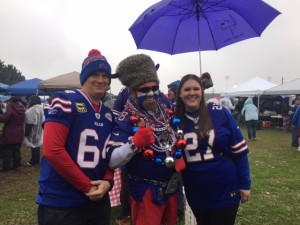 They eventually made their way to the Ralph Wilson Field house to have some more pregame fun & meet up with Matt & Claire. 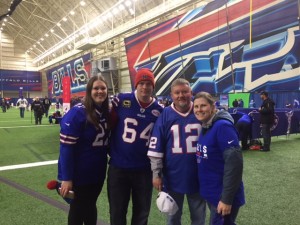 The field house was a fun place to hang out and get to know everyone. Best of all it was inside, out of the cold & rain.  My dad presented the guys with Thank you letters & new Bills caps, courtesy of New Era & they headed back outside to meet Bills Hall of Fame QB, Jim Kelly! 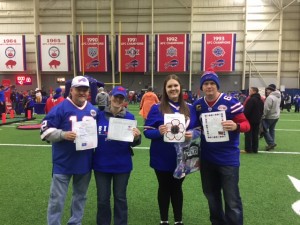 Jim has been helping make wishes come true since 2012.  Every game we host warriors in Buffalo, he always takes the time to hang out with the warriors and sincerely thank them for their services & sacrifices! 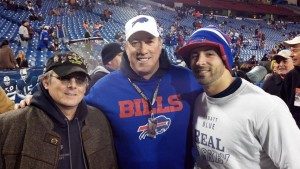 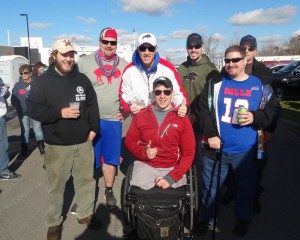 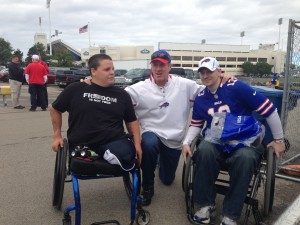 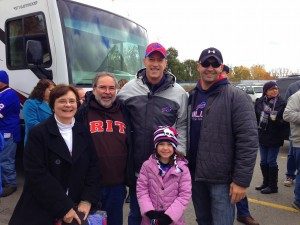 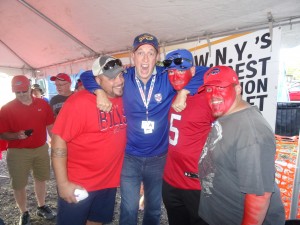 We cannot thank him enough for his support!  The warriors had a lot of fun hanging out with this Bills legend! 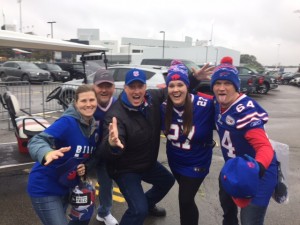 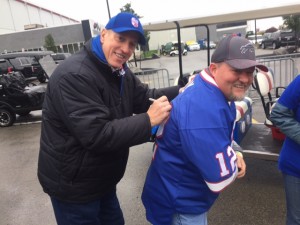 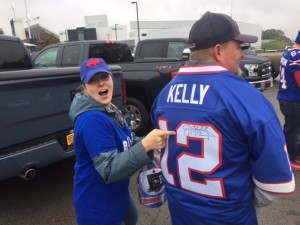 Matt got his Jim Kelly jersey signed & was afraid the signature would get ruined in the rain.  So they stopped at the car to drop it off before the group made their way inside to watch the Bills kick off against the Oakland Raiders. 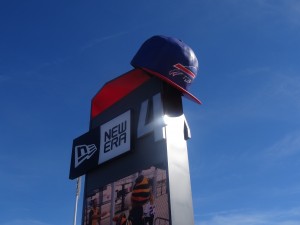 What seemed like a tough matchup against a good Raiders team, ended up being a blowout by the Bills.  Costly fumbles gave the Bills plenty of scoring opportunities & gave the warriors plenty to cheer about. LeSean McCoy trampled the Raiders for 150 rushing yards on the day & the Bills won 34-14! 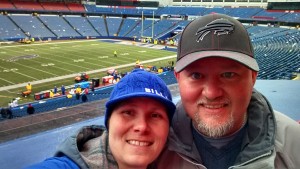 Operation Warrior wishes would like to thank Scott & the Buffalo Bills for providing tickets & for their years of continued support.  We also want to thank Danny’s south for hosting the warriors for breakfast. Captain Buffalo for hosting the guys at your tailgate, New Era for providing Bills Caps & Jim Kelly for always taking time to make the warriors experience special!

Most importantly, we want to thank Army SGT Mark Thompson & Air Force veterans Matt & Clair Carrell for their service & sacrifices to our country!  We salute you! 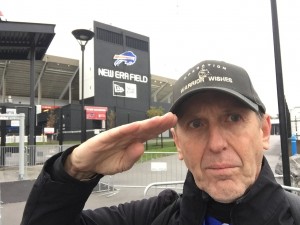 My dad will be spending the night in Buffalo & plans to stop by New Era tomorrow to thank them for their continued support throughout the years.   He will be back home Monday night & plans to go trick or treating with the grandkids before making wishes come true at the Jets game Thursday night!  Stay tuned for more details! 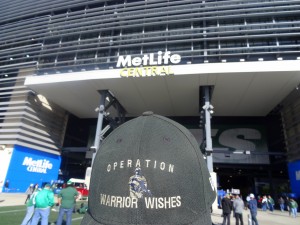