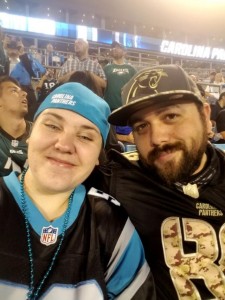 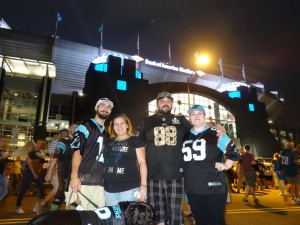 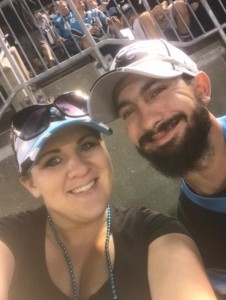 He flew home Friday & was back on the road Saturday night to Minnesota to host warriors at the Vikings game on Sunday. 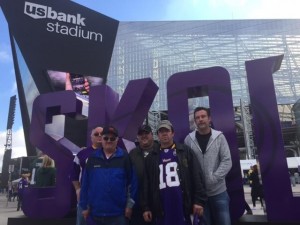 Sunday night, he flew to Chicago, took a train across town and jumped on an overnight bus to Nashville to make Wishes come true at the Titans game. 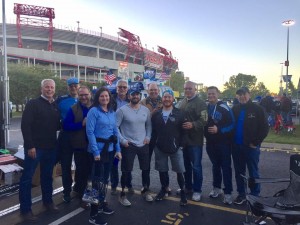 Tuesday morning he jumped back on a bus to Chicago & arrived home late Tuesday night.  He had just enough time to say hello to the family, clean up, unpack, re pack, get a good night sleep and on Wednesday afternoon he took off to Oakland to kickoff week 7 making Wishes come true at the Thursday night Raiders game! 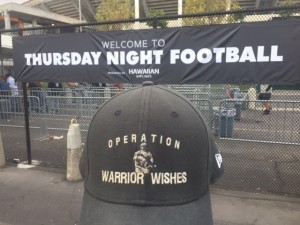 Week 7 will be another wild week.  As my dad will be hosting warriors in Oakland, San Francisco & Philadelphia!  We used points to book this flight, so my dad technically flew to Oakland for free.  He arrived in California at around 4pm & worked overnight catching up on thank you letters & posts.  He also got a few hours of sleep… 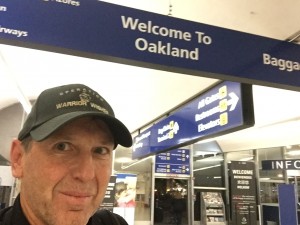 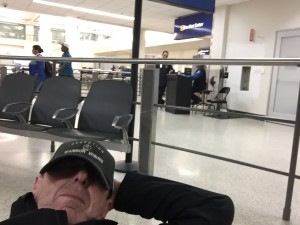 Early Thursday morning, he made his way to San Francisco via the BART to meet up with our good friend Lou, who once again was helping us make Wishes come true.  Lou & my dad headed out to Oakland Thursday afternoon & got caught in heavy rush hour/game traffic so they arrived a few minutes late.

Thanks to our friend, Kingsford Kirk & the Bad Boyz of BBQ, the warriors enjoyed tailgating while they waited for my dad & Lou to arrive. 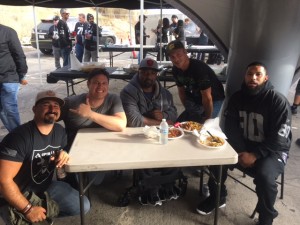 Today we were honored to be hosting Marines Demond Wilson & Ulises Gomez at the Raiders game.

Throughout the years we have made some lifelong friendships & unforgettable memories making warrior wishes come true in Oakland. Here are some of our favorite moments. 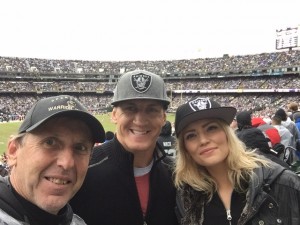 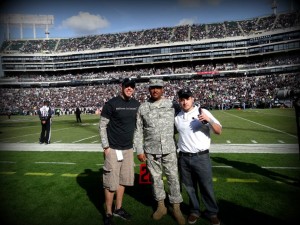 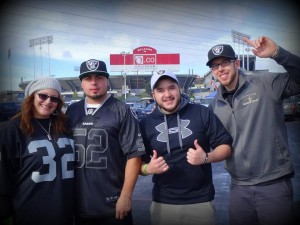 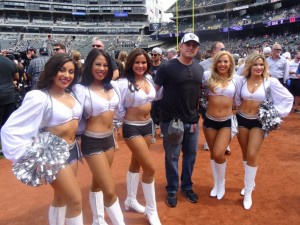 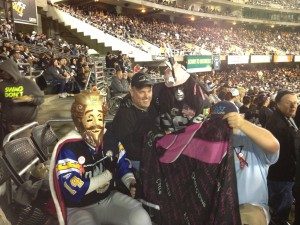 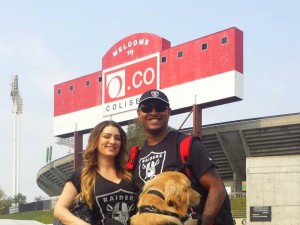 Army SGT’s Danny O’Neel, Travis Miller & Xavier Bianchi were also welcome with open arms at the tailgate.  Kingsford Kirk & the Bad Boyz of BBQ have one of the best tailgates in the NFL!  Every Raiders superfan is in attendance, they have delicious food, cold drinks & a welcoming atmosphere, even though some of the Raiders super fans are pretty intimidating with their face paint & spiked shoulder pads…  It’s always an unforgettable experience.  We cannot thank them enough for their support over the years 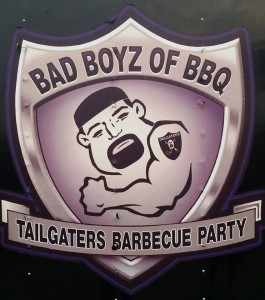 Danny, Travis & Xavier were all in town for a battle buddy reunion & already had tickets to the game.  They all served with our 2014 Canton Hall Of Fame Game guest, Shane Parsons. In fact Travis Miller actually saved Shane’s life!  it was an honor to host them at the tailgate.

Lou dropped my dad off at the stadium & looked for a parking spot. As my dad was walking up to the tailgate, the warriors were making their way inside the stadium.  So he walked with them & escorted them inside. 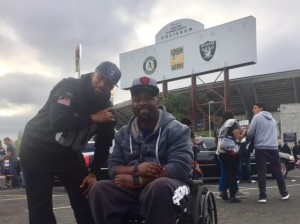 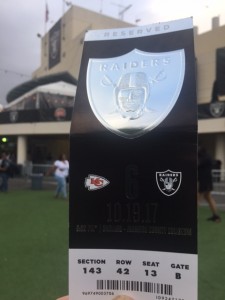 He then waited outside the stadium for Lou and for our other guests, Marines Ulises Gomez and Alex Vega, to arrive.  They too got stuck in traffic.

Ulises is a huge Raiders fan that was nominated to us by Alex.  We had the pleasure of hosting Alex at a 49ers game 2 years ago to thank him for his selfless service to our country.  Ulises, Alex & Lou all arrived at the same time & the group made their way inside. 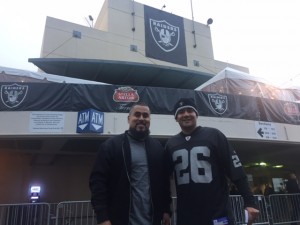 The warriors were treated to an unforgettable game!  The Chiefs and Raiders battled back & forth exchanging leads throughout the game. The Chiefs took a 30-21 lead into the 4th quarter.  With 10 minutes left in the game, the Raiders kicked a field goal to make it a 1 score game. After trading punts, the Raiders got the ball with a little more than 2 minutes left on the clock & had one last chance to win the game.

Derek Carr connected multiple times with Amari cooper to move the ball to midfield.   Facing a 4th & 11 with the game on the line, Carr connected with Jared cook up the middle for 13 yards & called their final timeout with 33 seconds remaining in the game.

After 2 incomplete passes, Carr tossed a deep pass down the field into triple coverage.  Somehow Jared Cook came down with the ball & landed into the end zone!  TOUCHDOWN RAIDERS!!!   The warriors & the entire stadium started celebrating!  But wait, the play was reviewed & Cook was marked just shy of the goal line.  By rule, 10 seconds were run off the clock & the raiders had 16 seconds to score.

Carr took the snap & quickly threw a pass to Crabtree in the end zone. TOUCHDOWN RAIDERS!  However a questionable offensive pass interference was called on Crabtree nullifying the score.

This was it, 3 seconds on the clock.  The Raiders down to their last chance.  Carr tossed a pass to Cook over the middle and it slipped thru his hand and fell incomplete.  Game over.. However, a defensive holding penalty gave the Raiders new life and another shot to win the game.  1 untimed down for the win.

Carr dropped back & fired a pass to the back of the end zone.  The ball was caught by Patterson, but he was unable to get both feet in bounds.  Game over….  However, the Chefs were called for defensive holding again!  Giving the raiders one more chance to win the game.

Carr took the snap & immediately started scrambling to his left.  He fired a bullet into the arms of Michael Crabtree in the end zone. TOUCHDOWN RAIDERS!!!!  There were no flags in the field, the play was reviewed and confirmed.  The extra point was good!  After 5 “final plays” &  a roller coaster ending, the Warriors finally celebrated the Raiders win in one of the wildest games in NFL history! 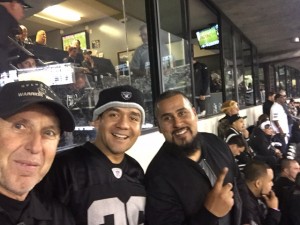 Operation Warrior Wishes would like to thank Kingsford Kirk & the Bad Boys of BBQ for hosting the warriors at your tailgate & New Era for providing new Raiders caps to the warriors.  We also want to thank our good friend Lou who provided tickets and has been helping make Warrior Wishes come true in the Bay Area since 2012! 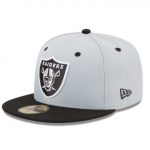 Most importantly we want to thank Marines Demond Wilson, Alex Vega and Ulises Gomez as well as Army Veterans Danny O’Neel, Travis Miller and Xavier Bianchi for their service & sacrifices!

My dad will be spending the few days in California hanging out with friends in San Francisco.  He will be back in action this Sunday making Wishes come true at the 49ers game!  Stay tuned for more details.