Skip to content
This season my dad has made warrior wishes come true in 18 NFL games across the country.  My dad will be the first to tell you that being on the go all the time is not always easy, especially when you’re sick.  After hosting heroes in Oakland in the pouring down rain, my dad came down with a cold. 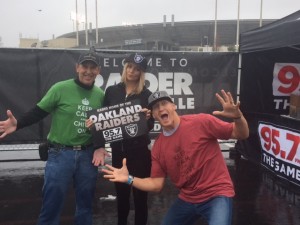 Thankfully he got to sweat it out in Arizona when he made Warrior Wishes come true at the Cardinals game Monday night & had a few “days off” to rest before he hit the road to Green Bay! 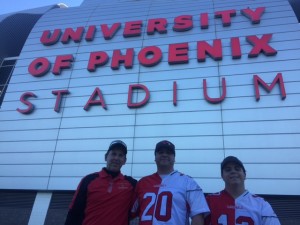 Early Thursday morning, My dad took a 5am train to Chicago where he then walked a few blocks to the bus station and took a greyhound north to make warrior wishes come true at the Packers game! 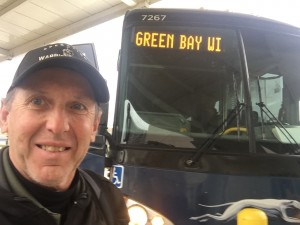 Over the past 4 years we have made some unforgettable memories making Warrior Wishes come true at Lambeau Field! 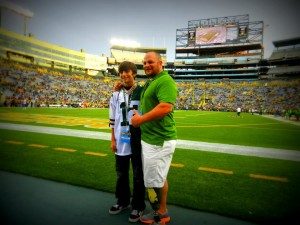 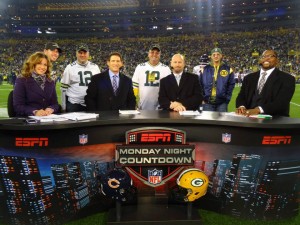 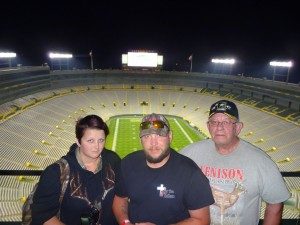 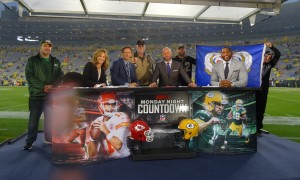 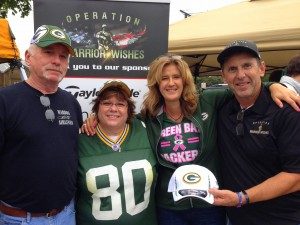 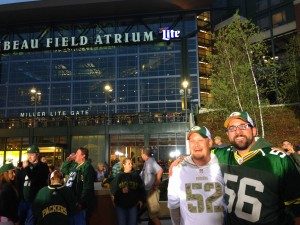 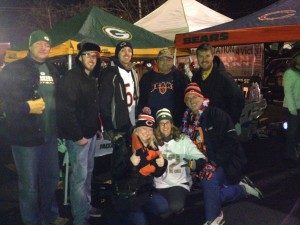 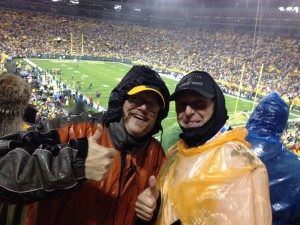 And it always seems that every year we go up to Green Bay that the Packers are always playing the Bears!  Mainly because it’s typically a prime time game & we almost have to host Warriors at every Thursday & Monday night game to be able to complete our 32 game mission.

This year was a little different, as my dad said there were far less bears fans in attendance than there normally is.  Their 1-5 record definitely doesn’t help, but it’s one of the biggest rivalries in the NFL & Lambeu field is one of the most amazing stadiums in the league! 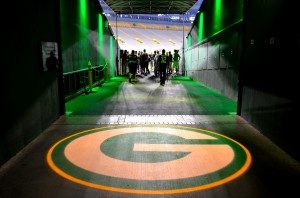 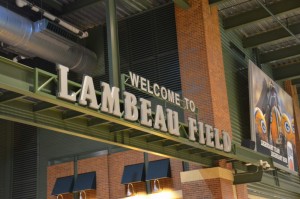 This year, we were honored to be making Warrior Wishes come true for Army Sgt Ryan Fellenz, Army SFC Rocky Andrews & Marine Adam Spaw.  All 3 Warriors were huge Packers fans, Ryan and Rocky had been to Lambeau before, but for Adam, it was his First NFL Game Ever! 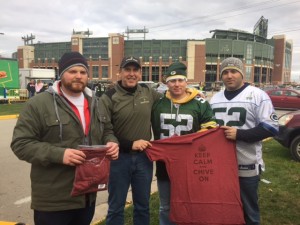 My dad met up with the Warriors at the “Tompa Tailgate” across the street from the stadium. Bernie and Shana Tompa, along with Shana mom Gladys, have been hosting and honoring the Warriors at their tailgate for the past 4 years!  The even hosted a fundraiser to benefit our mission in 2013. Gladys lives 5 blocks away, which makes it very convenient for us and the warriors. 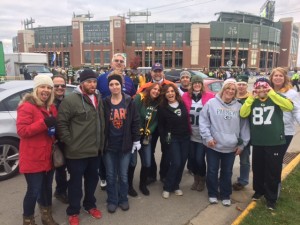 Adam and Bethany (Adams wife) arrived first, which gave my dad a little time to get to know them.  Needless to say, Adam was pretty excited to be attending his first NFL game!  Ryan and Rocky arrived half hour later, and we hung out at the tailgate for awhile talking about everything from football to family – we learned that the 3 warriors combined had 9 girls between them & no boys!  Everyone had a great time! My dad thanked Shana for the food & fun one last time before making their way over to the stadium.  Bethany, Adams wife, is actually a Bears fan so we got a couple cool pictures to show how they were a “house divided.” 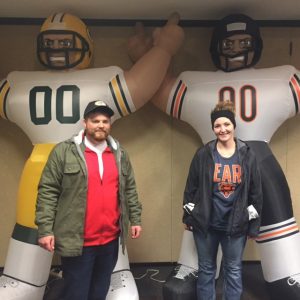 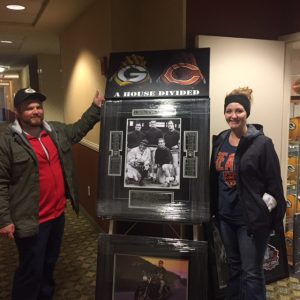 Once inside the stadium, Adam immediately went to the Packer Pro Shop, which has everything you can possibly imagine with a packers logo on it, to buy a Salute to Service jersey & a foam finger.  He wanted to remember that he bought his jersey AT LAMBEAU FIELD as part of experience. 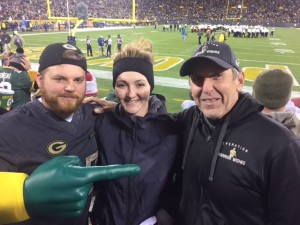 I got lucky & was able to buy tickets in the 4th & 28th rows in sections that were close for a great price!  My dad suggested that the Warriors switch seats at halftime to give everytone the opportunity to sit in the 4th row, but Ryan & Rocky said Adam and his wife could have the 4th row Tix since it was their first game. 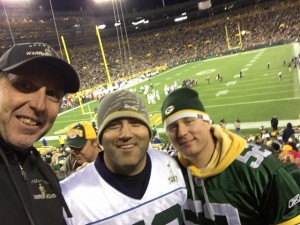 Not only did they all have great seats but everyone had a great time at the game too.  The Bears hung around early, leading 10-6 but the Packers went ahead 13-10 and never looked back.  Thanks to Devante Adams incredible performance, the Packers dominated the Bears 26-10. 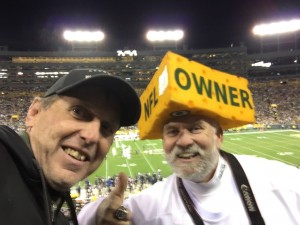 After the game we said our goodbyes and my dad walked down to Shana moms to pick up his bag, had a bite to eat, and got a ride down to the casino so my dad could get a little work done before his early morning bus ride. 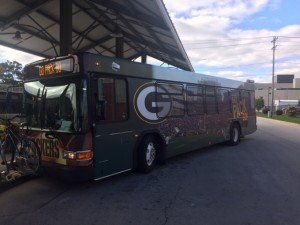 Operation Warrior Wishes would like to thank the Tompa family for hosting us at their tailgate, New Era Cap for providing Packers Caps to the Warriors & the Green Bay Packers for providing the warriors with Souvenir Gift Bags with Packer gear and memorabilia. 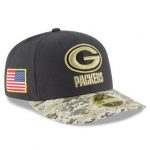 MOST IMPORTANTLY Thank you to Marine Cpl Adam Spaw, and Army Sgt Ryan Fellenz and SFC Rocky Andrews for their service & sacrifices to our great country!  It’s appreciated, has not gone unnoticed & will never be forgotten!

My dad hopped back on the bus early Friday morning to hang out with Xander and Quinn for a day before flying to Kansas City to pull off another Surprise Warrior Wish Saturday night! Stay tuned for more details. 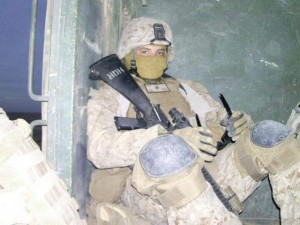 My name is Adam Spaw. I was born 12/11/1988 in Dubuque, IA. I joined the Marines in March of 2008. I did two deployments to Afghanistan, Both of which I volunteered for.  My first deployment was in 2009 to 2010 my second was in 2011 to 2012. When I returned from my second deployment I EAS from the Marines. Shortly after returning to Wisconsin I began a new battle with PTSD. I currently live in Wisconsin with my wife and two daughters. However I at this time I am currently at Tomah WI VA for inpatient treatment for PTSD. 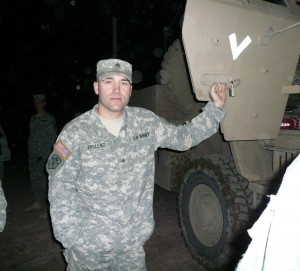 SGT (Ret.) Ryan Fellenz now lives in Chippewa Falls, WI with his wife Melissa and their three daughters Abigail (6yrs), Annabelle (4), and Bailey (6months).  Ryan attended the University of Wisconsin-Stout majoring in Supply Chain Management and graduated in December of 2013.  SGT (Ret.) Ryan Fellenz aspires to own and operate his own company one day within this realm of study.