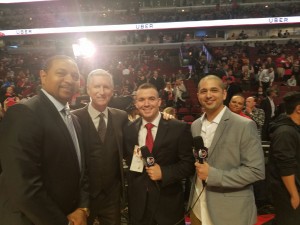 Operation Warrior Wishes is kicking off December with 5 events in 5 days!  It all started with last nights Vikings game in Minnesota.

As we mentioned, tonight we are honored to host warriors at the Chicago Bulls game.  They are up against Lebron James & the Cleveland Cavaliers.  Lebron lost a bet to Dewayne Wade when the Cubs beat the Indians in the World Series, so he had to wear full Cub jersey to the stadium.

We had the pleasure of meeting Paul Sucec a couple years back thru our friends at ESPN.  Paul is the military Liasson for the network.  A few months back he reached out to us when he was moved over to cover the NBA  & asked if we wanted to host some warriors at Basketball games.  He offered to provide some special access to the Warriors.  Needless to say, we couldn’t turn it down and Hosted Warriors at the Cavs vs Bulls game to kick things off.

Since my dad was still on his way back from Minneapolis on a bus, Warrior Wishes Director, Manny Gonzalez, stepped in to host Army Sgt Sean Griffin & Sgt Matthew Oliva. Ironically SGT Griffin & Manny, who served in the marines, met earlier this year when they helped us pack care packages to send overseas at the “FamilyPalooza.”

Unfortunately, due to heavy traffic, the Warriors were a little late. Thanks to Paul, they still got an abbreviated version of the Tour and On Court Access before the game.  They got photos with the ESPN on air personalities.

Operation Warrior Wishes would like to thank Paul at ESPN for the first of many NBA ON ESPN games we will be doing this year and to Marine Manny Gonzalez for hosting the event.

Most importantly we want to thank Sgt Sean Griffin and Sgt Matthew Oliva, for their service to our country!

My dad will be back in action this weekend to make wishes come true in Jacksonville & New York!  Stay tuned for more details! 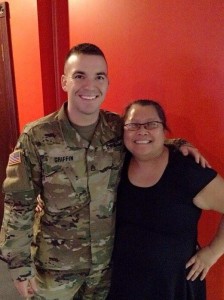 SSG Griffin joined the Guard in December 2008. He reported to Delta Company
RRB of Aurora IL until leaving for basic training in 2009.
Then SSG reported to Alpha Battery 2/122 Field Artillery where he served as
a Driver, Ammunition Specialist, Gunner, and Section Chief over the course
of 5 years. He was selected as the NCO of the year twice during that time,
as well as TOP GUN, for having the most effective howitzer crew.

He was then selected to be a recruiter for Delta Company RRB of Aurora, IL
in 2014. Last year he was selected as Illinois Recruiter of the Year and
placed second in the Regional Competition. 8 total years of service, and
counting. 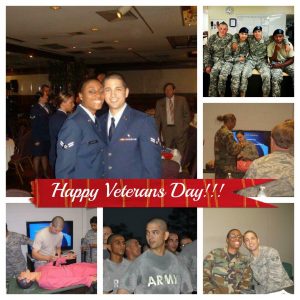 My name is SGT Matthew Oliva, I have been serving my country proudly for the last 10 years.  I have 7 years wiht the Air Force and 3 years with the National Guard.