After making Warrior Wishes come true in Milwaukee thanks to the Bucks, my dad rested up overnight at the bus station before catching a 7am bus back to Chicago and hopped on a train back home to pick up Bulls tickets and Bulls hats for tonight’s game. 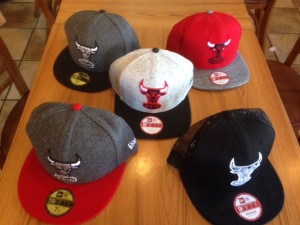 He got to spend a couple of hours home with Xander before jumping back on the train to Chicago around 4pm to meet up with the Gobly’s, a Gold Star family.

Christopher Golby joined the Army shortly after he graduated hish school in 1995. On January 8th, 2004, while serving as a helicopter crew chief, Golby & 8 other soldiers made the ultimate sacrifice when their Blackhawk medical evacuation helicopter was shot down in Iraq.

Golby planned to be a pilot after he left the military.  Ronald Golby, Chris’ father said “Chris loved his job.  He loved to fly.  I’m proud of him.”

It was an honor to host SGT Golby’s wife & kids at the Chicago Bulls game in honor of his Legacy.  My dad met up with the family at the world famous “Billy Goat Tavern.”

The original Billy Goat Tavern was “born” in 1934 when Greek immigrant, William “Billy Goat” Sianis, purchased the Lincoln Tavern. Billy Goat bought the tavern for $205, with a check that bounced but was later repaid with sales from the first weekend. The tavern was located across from the Chicago Stadium (now United Center) and attracted mainly sports fans. Sianis became known as “Billy Goat,” when a goat fell off a passing truck and wandered inside. Sianis adopted the goat, grew a goatee, acquired the nickname “Billy Goat,” and changed the name of the bar to the Billy Goat Tavern.  in 1978 SNL immortalized the Billy Goat Tavern when Bill Murray, John Belushi & Dan Akroyd starred in a skit based on an experience at the tavern.  Cheezborger, Cheezborger, Cheezborger, No fries-CHEEPS, No Pepsi-COKE!

It was a fun place to meet up and get to know each other before heading over to the United Center to watch the Bulls take on the Pistons.  On their way inside they had to make a stop and take a picture at the famous Michael Jordan statue with their new New Era Bulls Caps! 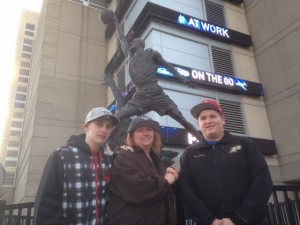 Jimmy Butler earned his first career triple double, but unfortunately it wasnt enough to get past the Pistons & the Bulls lost 94-90.  Despite the loss, everyone had a great time honoring the legacy of Army SGT Christopher Golby.

We would like to thank the Billy Goat Tavern for providing pregame Cheezborgers, Cheeps & Pepsi, Chicago Bulls for providing goody bags for the family, and New Era for outfitting the Golby Family with new Bulls caps! 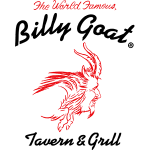 I told my dad that he should have slept over at the stadium and watched the United Center transform from a basketball stadium to a hockey arena as he will be back in action first thing in the morning to make Warrior Wishes come true at the Blackhawks game!  Stay tuned for more details.