Immediately following making warrior wishes come true in Kansas City at the Royals game for the 2nd straight day, my dad hopped on an evening train to St Louis.  He spent the night at the casino playing penny slots to pass the time & ended up winning $20.  He also got a few hours of sleep too… 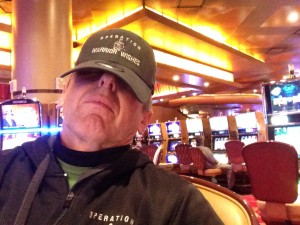 When the sun came up, my dad made his way down to Busch stadium to meet up with Army SSG Ryan Yearicks with his service dog Harley & Army SPC Katie Knight with her service dog, Minders to make their warrior wishes come true at the Cardinals game. 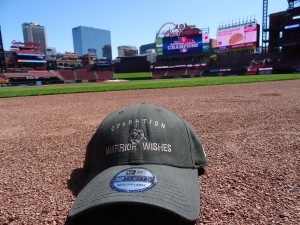 Before the game, the Warriors were treated to lunch thanks to Fox Sports Midwest Live located in “Ballpark Village,” just outside of Busch stadium. They were also treated to a private tour of the facility , including the exclusive Rooftop Club part of Ballpark Village 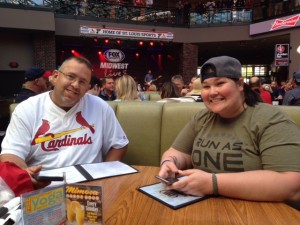 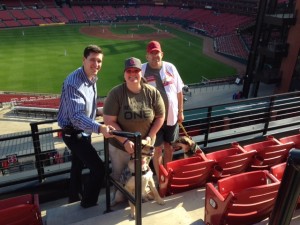 FOX Sports Midwest Live! is the central gathering place and entertainment plaza of Ballpark Village with 20,000 square feet of entertainment space & a world-class audio and video presentation, St. Louis sports fans get one of the best sports-viewing experiences in the country. There’s a 100 foot long retractable glass roof, one of the largest of its kind in the country, so fans can enjoy the nice weather during warmer months. The venue includes, a stage for live concerts and performances.  It was a great place to meet up with the Warriors for lunch.

Thanks to the Cardinals, the Warriors had an opportunity of a lifetime to watch warm ups from the field & got to hang out in the dugout before the game! 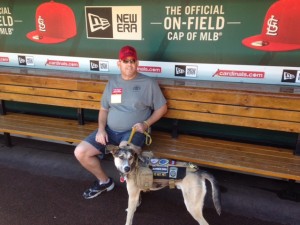 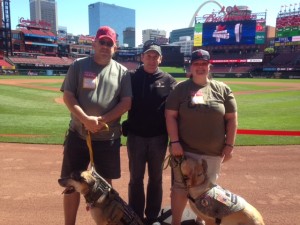 One of the Cardinals coaches served in Vietnam himself, so he & Ryan talked for a while.  Minders & Harley stole the show as a few players stopped by to admire them & tell the Warriors thank you for their service. 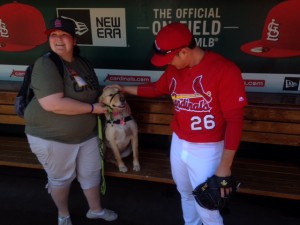 The Cardinals also provided tickets for the game for the Warriors.  They didn’t waste any time scoring as Brandon Moss homered in the 1st inning to give the Cards a 1-0 lead.  That would be all the runs they would need to win the game, but they added a few more for insurance as they beat the Phillies 4-0. 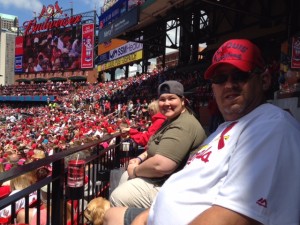 During the game, the Warriors were recognized with their names on the score board (Look in the bottom lefthand corner).  It’s the small thing that help us make big memories & show the Warriors that their service & sacrifices have not gone unnoticed & are never forgotten. 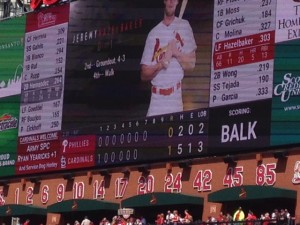 Needless to say, everyone had an awesome time thanks to the Cardinals for providing tickets, field passes & the score board message.  We also want to thank New Era for providing Cardinals caps for the Warriors, and Fox Sports Midwest Live for the delicious food! 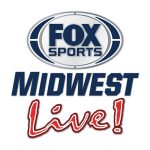 My dad will be getting a rare hotel for the night.  He will be back in actiontomorrow hosting heroes at Busch stadium again thanks to Edward Jones! 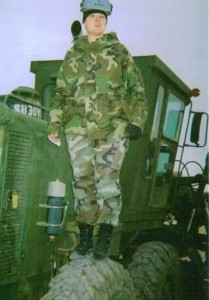 Katie Knight served in the United States Army for 4 years active duty and 4 years in the Missouri National Guard.  She was an E4 Specialist & an  Engineer as a Heavy Equipment Operator.  Katie loved serving very much.  She now battles PTSD.  Her service dog, Minders, was trained through Missouri Patriot Paws out of Rolla MO. and helps her with her PTSD.