After a week long break my dad was back on the bus and heading north to Detroit. 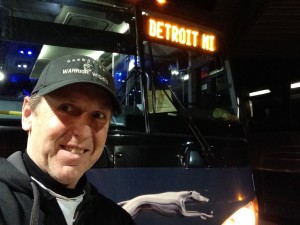 The bus arrived in The Motor City around 2am.  It  was too late to get a hotel, but my dad needed to kill a few hours & get some sleep before meeting up with the Warriors. He ended up walking a few blocks from the bus station to the Casino, which is open 24 hours. 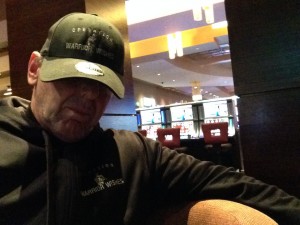 As the sun was rising my dad walked 4 blocks to Whole Foods to meet the Warriors for breakfast. 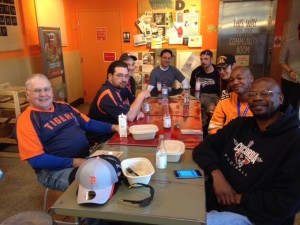 My dad enjoyed catching up with old friends & a few new ones at breakfast thanks to Whole Foods before the game. One of his favorite parts of the warrior wishes experiences is getting to watch the Warriors pick out their new New Era Caps. New era has been providing caps for the Warriors since we began our mission in 2012, it’s a partnership we are very thankful for! 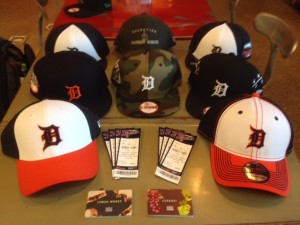 After breakfast the crew walked 6 blocks to Comerica field, home of the Detroit Tigers. 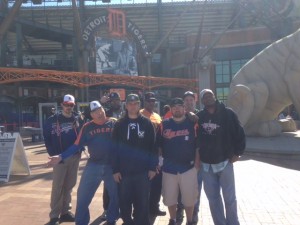 Once inside the stadium, everyone made their way down to the front row behind the dugout to watch batting practice. 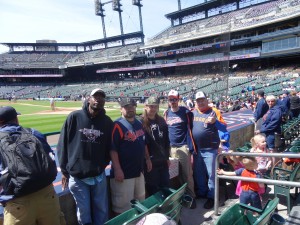 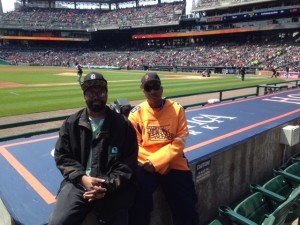 Thanks to the Tigers, the Warriors got to enjoy a fun day of baseball from the left field bleachers.

Trailing by 3 in the bottom of the 8th inning Tigers slugger Miguel Cabrera stepped to the plate with the bases loaded & attempted to take the lead with one swing.  Unfortunately, he popped out to end the inning & the Tigers fell short losing 6-3 to the Indians.

Despite the loss, the Warriors all had a great time at the game, but our day wasn’t over.  Our friends at Hockeytown Cafe had post game pizzas waiting for us after the game. 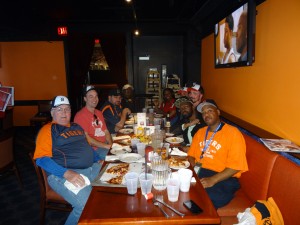 Hockeytown Cafe is the premier pub in Downtown Detroit.  Located walking distance from both Ford field & Comerica park, Hockeytown cafe is a must do before or after a game.  The high energy sports themed establishment is packed with big screen tv’s and memorabilia.  To top it off, their food is delicious!  Make sure to stop by next time you’re in town.

While the Warriors continued to hang out after the game & eat pizza, my dad said his goodbyes & thanked them all for their service before heading back to the bus station to come back home.

We would like to thank Whole Foods Market Detroit for providing a delicious pre game meal, the Detroit Tigers for providing tickets for the Warriors, New Era Cap for outfitting the Warriors with new Tigers Caps & Hockeytown Cafe for post game pizzas! 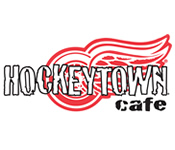 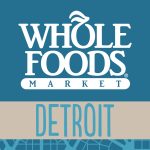 My dad will be back home for about a week to network with contacts at the NFL draft in Chicago for our upcoming “All32in17” mission.  Then he will be back on the road May 3rd to make warrior wishes come true in Kansas City, St. Louis, Houston & Dallas.