Our 2017 Battlefields to Ballfields mission is almost complete.  So far we have made wishes come true at MLB stadiums East, South & Central.  Over the next 10 days, my dad will be out west to complete the mission.  He will be making stops in Seattle, Los Angeles, Phoenix, Anaheim, San Diego, Oakland & San Francisco!

At 5am Wednesday Morning, My dad & I drove downtown, before I had to go to work, to pick up some autographed memorabilia from Coach Ditka.  Coach has been a supporter of our mission since 2012 & is one of the biggest reasons we have the organization.  He autographed items for us to put in our silent auction on July 24th.  We cannot thank him enough for his support!

After picking up the items, I dropped my dad off at the airport on my way to work.  He arrived in Seattle Wednesday afternoon & did a little sight seeing before getting a good night sleep at the SeaTac airport.

As usual, My dad was up bright and early, ready to make today special for some deserving warriors.

Unfortunately, a couple of the warriors were unable to attend & cancelled last minute.  But it was a true honor to host Army Ranger David Maestas at today’s Mariners game. 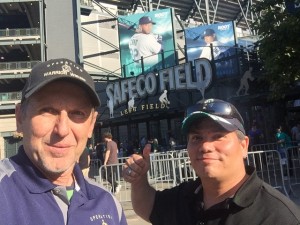 David has proudly served our country for more than 20 years. He continues to serve his fellow veterans by training them for employment and helping them transition back to work.

My dad enjoyed getting to know David over a delicious meal at Jimmy’s on First, located right across the street from Safeco Field. Jimmy’s ……. & they also helped us make wishes come true last year.  We cannot thank them enough for their generosity & support.

This was Jimmy’s first Mariners game since 2008 and it couldn’t have come at a more perfect time.  He told my dad he  needed a night off to relax. We are glad we were able to provide that to him.

After dinner, My dad presented Jimmy with “thank you for your service” letters from the students at Clinton & Ranchview Schools in the Chicago suburbs.  He also gave him his choice of a brand new Mariners cap thanks to our friends at New Era.

Before heading into Safeco Field, my dad & Jimmy stopped to take a quick selfie outside the stadium.

Once inside, they made their way down by the field to watch batting practice.

Upon arriving at their seats, they met a Marine & Navy veteran seated nearby & introduced themselves.

The game did not start out well for the Mariners as they fell behind the A’s 3-0 in the first inning. They kept it close until the A’s hit a pair of homers in the 6th to make it 7-0 to take control. The Mariners did push 3 runs across in the 9th inning, unfortunately the game was never really close and the A’s won 7-4.

As my dad & Jimmy we were getting ready to leave, the wife of the Navy vet seated nearby handed my dad a card & offered to host warriors out on their boat in the future. It was a great gesture & awesome opportunity!  Especially for Sgt Maestas, who lives in the Seattle area and is very active with veterans in the area. This could be a great resource for him!

Operation warrior Wishes would like to thank Ken at Jimmy’s on First for providing the delicious Pre Game meals & their continued support. We also want to thank New Era for providing Mariners Caps, David Hodges,Carlos Mullen and Brittany Hamilton for their nominations & Laurie for offering us the opportunity to host warriors on You boat in the future!

Most importantly, Thank You to Army Ranger (and new friend) Sgt David Maestas, for his service to our country (and the ride back to the airport after the game).

After another good night sleep at SeaTac, my dad will be back at Safeco Field tomorrow night to host a new group of warriors.  Stay tuned for more details!