My dad got a great night sleep at the SeaTac airport for the 2nd night in a row & was up early to finalize plans for the day.

Once he had all 4 guests confirmed for the game, he had some time to explore Seattle.  He made stops at Pike’s market & the Space Needle before making his way to the stadium to meet up with the warriors. 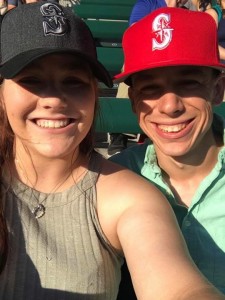 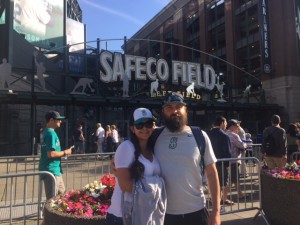 My dad met up with Army SSG Anthony Baumiller and his wife at 4:30 for dinner at Jimmy’s on First for the 2nd straight night.

They had great time at dinner learning about each other’s kids/grandkids and found out that both he and his son are pretty good ballplayers. My dad also found out They are expecting their 3rd child.

Sgt Baumiller just retired a couple years ago from the Army. He was nominated by Sgt David Hodges who was our guest a couple years ago before heading across the street to the stadium, my dad presented the Baumiller’s with “thank you for your service” letters from the Chicagoland school children and their Mariners Caps thanks to New Era.

As always, my dad snapped a few pics in front of the stadium before Sgt Baumiller & his wife headed inside.

While they made their way to their 4th row seats, my dad went back to Jimmy’s to meet up with Army Spc Drew Peterson and his wife.  They arrived around 7pm, so they had to quickly introduce themselves. They took a minute to get photos with their New Mariners New Era Caps in front of the stadium and made it inside just in time for the National Anthem.

Since both the warriors were all set up inside and on “date nights” with their wives, my dad decided to hang outside the stadium and wait for the game to be over before reconnecting with them.  But after waiting for about a half hour, a fan outside the stadium handed my dad an extra ticket

He immediately got t-Shirts for each of their kids. He delivered them to the warriors at their seats but didn’t want to stay too long, because he didn’t want to interrupt their date night.

Unlike yesterday’s game, the Mariners came out on fire & won 7-1.  Nelson Cruz hit his 300th home run during the game!

My dad had the chance to get to know Drew & his wife at their dinner following the Mariners win.  My dad learned they Drew was a Texas Rangers fan He was excited saying how cool it was that he got to see Cruz (who use to play for Rangers) hit his 300th Home Run.

Operation Warrior Wishes would like to thank Jimmy’s On First for their continued support, David Matseas (last nights guest) for nominating the Peterson’s for tonight event & New Era Cap for providing Mariners Caps!

But most importantly, thank you to SSG Baumiller and SPC Peterson for their service to our country!

As the warriors & their wives headed home, My dad then headed back to the LiteRail to go back to SeaTac Airport to catch his early morning flight to LA.