Do you believe that things happen for a reason? Well, we do and this mission was a perfect example of that.

My dad has spent the past few days on the road making wishes come true. He started on Tuesday in Cleveland, Wednesday in Pittsburgh, And last night he kicked off our 2018 “All32in17” mission in Philadelphia. 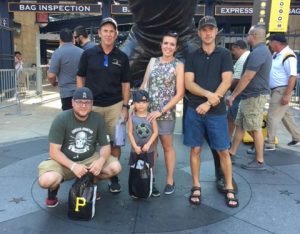 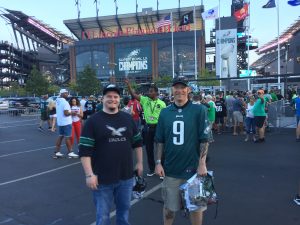 After the game, my dad made his way to the bus station to catch his ride to Boston. Unfortunately he bus was cancelled.
He eventually got a later bus to NYC & made it to Boston late.

The warriors we had planned to take to the Red Sox game cancelled last minute. So after a frustrating day of travel, my dad was in Boston with nobody to host… But my dad is always looking for an opportunity & noticed a gentleman sitting on a street corner reading a newspaper down the street from the VA. The gentleman was an amputee & his prosthetic leg was customized with Patriots & Red Sox logos on it! 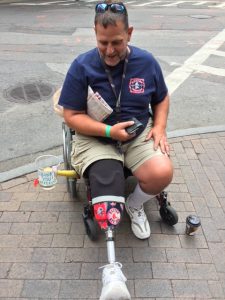 Needless to say, my dad started a conversation with him. He quickly learned that he was a Marine & a die hard fan! My dad told him about our mission & extended an invitation to host him for dinner and the game.

Mark, the Marine, was excited for the opportunity & took my dad up on the offer. They got to know each other a little better over dinner thanks to our friends at Game On sports bar.

Before heading over to Fenway Park, my dad presented Mark with a brand new Red Sox cap, courtesy of New Era & a few thank you letters from some school children to show him our appreciation for his service & sacrifices. Mark was very thankful for everything! 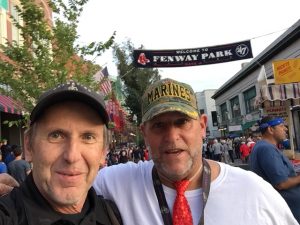 Unfortunately for Mark, the Red Sox fell to the defending World Series champions 6-3.

Operation Warrior Wishes would like to thank Game on sports bar for providing dinner & New Era Caps for providing Mark with his new Red Sox Cap.

Most importantly, we want to thank Marine Mark Wright for his service & sacrifices! My dad said that one of the highlights of his week was having the honor of meeting you. Keep inspiring! 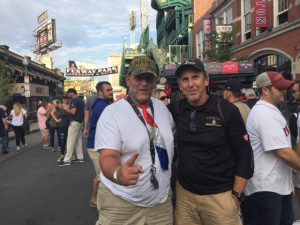 Hopefully for my dad, he doesn’t have any more travel issues… he will be back in action tomorrow hosting warriors at the Nationals game in DC & plans to stop by Walter Reed to visit some old friends. Stay tuned for more details! 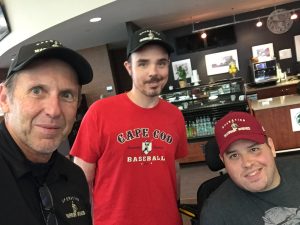