My dads morning 4 hour bus ride from Miami to Tampa seemed like a vacation compared to the 10 and 15 hour overnight busses he has been on this past week. 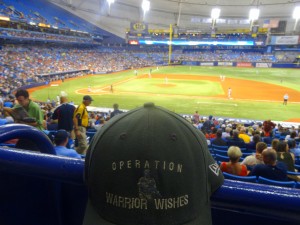 He arrived in Tampa around noon to host and honor Army SPC Austin Burchard at the Rays game.  Austin was one of the guests at the Bucs game on our original mission to honor heroes at all 32 NFL stadiums in 1 season back in 2012. 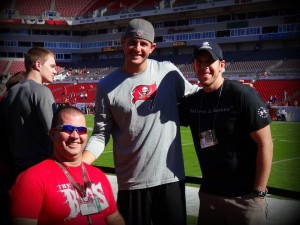 We worked with the Rays to initially plan honoring Austin on the scoreboard in 3rd inning, However, just as my dad was getting arriving in Tampa, the Rays called and asked if Austin wanted to throw out first pitch!

I dont think many people would turn that opportunity down.  Austin was so excited to throw out the first pitch that he called his neighbor and they were out practicing in their front yard a few minutes later! 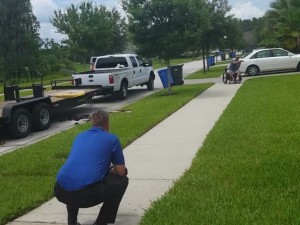 Unfortunately for my dad, there is no “easy” way to get to St Petersburg on public transportation – but since my dad is a public transportation guru, he found a way.  He had to switch busses a couple times but made it to Bonefish Grill by 4:00 to meet Austin, his wife Donna and their new addition, 14 month old Gabriel for dinner. 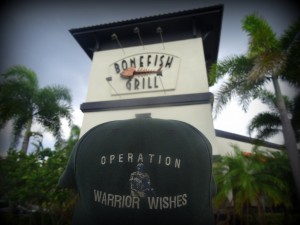 It was great to see them again.  As I mentioned before, Austin was one of our guests for the Tampa Bay Buccaneers a couple years ago.  However we had not met Gabriel – and what a cutie!!! 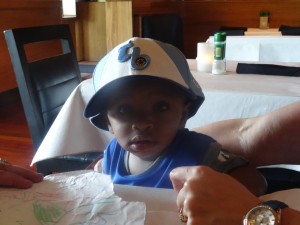 My dad enjoyed a great meal with the Burchards thanks to Bonefish Grill in St Petersbburg.  They had fun catching up a little an hearing the story how Austin was practicing pitching all afternoon.

After dinner, everyone hopped in Austin’s adaptive SUV head to the “Trop”- as they call It. When we got to Tropicana Field, my dad finally got to meet Dick Crippen who has worked with the Rays for a long time, and is now a senior consultant and an integral part of the Rays community efforts. 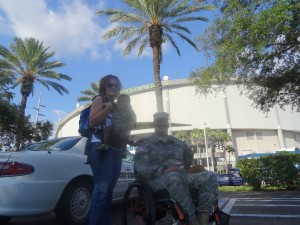 Austin & his family were escorted down on the field to get ready for his big night. Austin was determined to throw a strike.  Not only was this going to be on the Jumbotron, they also were showing it on local TV broadcast! 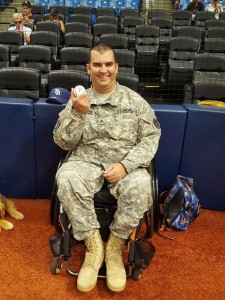 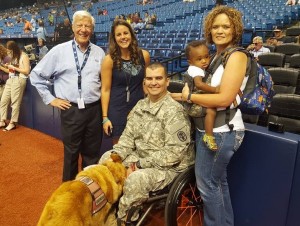 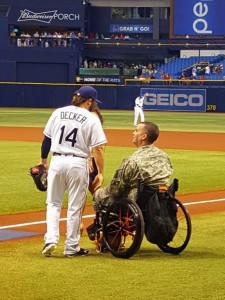 So the moment of truth was here -will Austin’s practice pay off ?  Or will he throw a pitch like 50 cent? 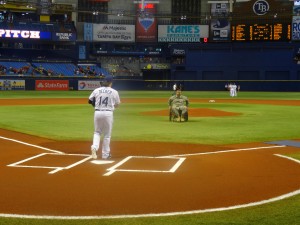 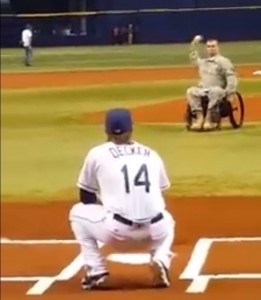 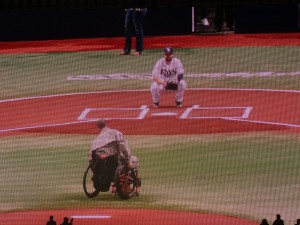 The pitch was a little high and inside, but I would say it caught the corner for a Steeerike!!! s – Way to go Austin!!! 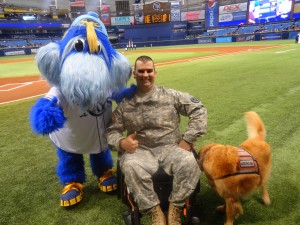 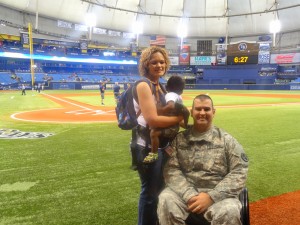 The opening pitch was just the beginning of a fun night for Army SPC Burchard and his family.  They were also honored on the Jumbotron in the 3rd inning. 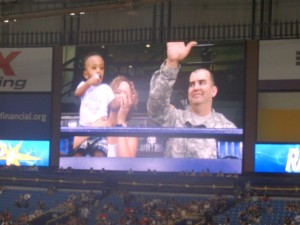 One of the best part of the evening was yet to come, as hundreds of fans – including a few of the Burchards friends who were there and surprised when they saw Austin on the field – came up to thank him for his service and commend him on his great pitch.  It was a fun and memorable night for everyone involved – even the fans!!! 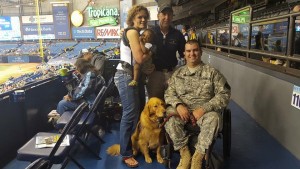 Austin also “took credit” for the Rays performance and maybe he DID motivate the team.  The Rays had lost 10 straight games, but tonight they pounded out 5 runs in the 1st inning, right after Austin’s pitch. They went on to score 13 runs on their way to a dominating 13-7 victory.

After the game, the Burchards gave my dad a ride to a budget hotel, his first hotel of the week so he could at least get one good night sleep.

Operation warrior wishes would like to thank Bonefish Grill for the delicious Pre Game meal, to New Era Cap for awesome Rays caps for and of course the Tampa Bay Rays for their hospitality, as well as the First Pitch and Scoreboard Honor. It was an incredible experience!!!

It was an honor to host Austin & his family at the game & cannot thank him enough for his service & sacrifices.  My dad will be back at Tropicana Field tomorrow nightto make more Warrior Wishes come true thanks to the Rays!  Stay tuned for details. 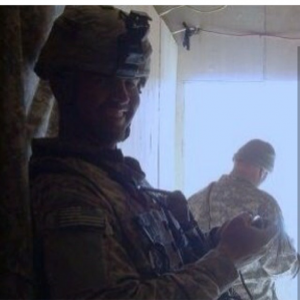 SGT Austin Burchard was born in Abilene, Kansas on 20 April 1980. SGT Burchard joined the United States Army in September 2007 in Salina, Kansas. He attended BCT in Fort Jackson, South Carolina and AIT in Fort Sills, Oklahoma graduating in December 2007 as a Forward Observer.

SGT Burchards’ first duty assignment was 10th Mountain 3rd Brigade 2-87 D-Co 1st platoon in Fort Drum, New York. He supported an Infantry unit as a Forward Observer with the responsibility of knowing and learning the functions of mortars, artillery, combat helicopters, combat jet and various military water craft in order to be able to use this knowledge when under fire during combat. In addition he trained up non artillery personnel how to use a basic call for fire under an emergency situation. SGT Burchard retired from duty station of Ft. Stewart, Georgia WTU C-Co.

In 2009 SGT Burchard deployed to Afghanistan with his brigade and on March 19th that year SGT Burchard was shot at close range while on guard duty. After 21 months in the hospital, passing away and being brought back by CPR twice, 17 surgeries, complete paraplegia from the T11 down, removal of 3 major organs, multiple infections, 3 pulmonary embolisms, internal bleeding and many more future stays in the hospital SGT Burchard is healthy and happy to be alive. SGT Burchard medically retired from the Army in Oct 2013

Since retirement SGT Burchard has continued his education in Computer programing. Went to back to work at CENTCOM at MacDill AFB. In his free time he loves to fish, hunt, play wheelchair basketball and softball. SGT Burchard and his wife adopted a son last year and are currently enjoying being parents to a busy 14 month old.

It was a true honor to have the opportunity to host SGT Burchard & his family in Tampa thanks to the Rays.  We are forever grateful for this family’s service & sacrifices!