Needless to say, my dad was going to have a very busy day – He took a bus in the middle of the night in order to get to Philadelphia in time to have breakfast with our “PALS & Special Guests from last night. 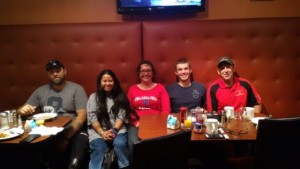 No sooner did they finish up breakfast and say goodbye, My dad  headed over to McFaddens at Citizens Bank Park to greet his new set of Warriors for tonight’s Phillies game. 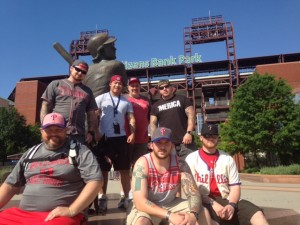 Johnna and Dale, and McFaddens Restaurant outside of Citizens Bank Ballpark have been helping us make Warrior Wishes Come True since 2013 and we are proud to have them as a partner for all Philly sporting events. Today we were honored to host 6 warriors at the Phillies game.   Joining us were Army warriors SGT Logue , SSG Alcorn, and SGT Ward & Marines SGT Hall, Daly and Gordeck.  Army Sgt Joe Logue brought his dad along to celebrate his 54th Birthday. 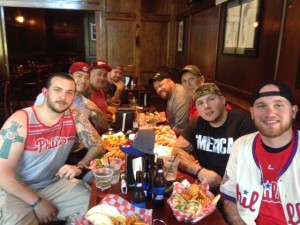 McFaddens is also conveniently located right next to the ballpark, so after getting to know everyone over a tasty pregame meal, they all walked about 50 feet to the Phillies Media Entrance to meet up with Mackenzie from the Phillies. 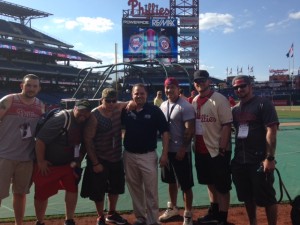 The Warriors were treated just as VIP’s should be – with a tour of the stadium and then heading down to the field to watch batting practice and meet players from both the Phillies and the visiting Washington Nationals. They even got to sit at the podium for “press conference.” 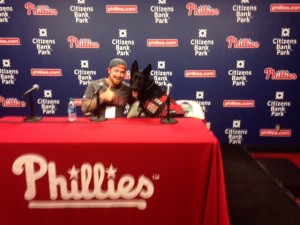 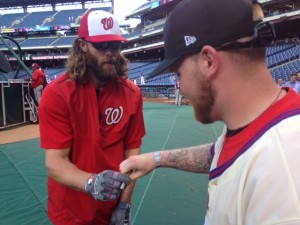 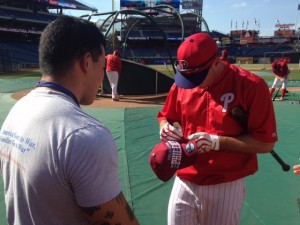 The game itself was a nice close one, as the Nationals took a 2-1 lead into the 9th , but a 3-run homer in the 9th inning put the game away and unfortunately the Phillies fell to the Nationals by the score of 5 to 1. 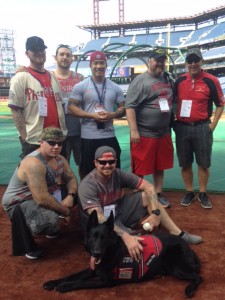 Warrior Wishes would like to thank McFaddens for their continued partnership & a delicious pre game meal, New Era for outfitting the warriors with new Phillies Caps and the Philadelphia Phillies for an incredible experience and hospitality. 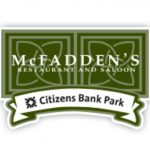 But as always – and most importantly – THANK YOU to our warriors for their service & sacrifices to our country.

My dad will be hopping on another 12:20am overnight bus for the 6th time in 7 days.  This one will be destined for Cleveland to host warriors at Cleveland Indians game tomorrow night – the 12th and final games and city  of the 3rd leg of our Battlefields to Ballfields Mission.  Stay tuned for details!