For the 2nd time this season, we teamed up with PALS (Patient Air Lift Services) to make Warrior Wishes come true.

Throughout the past few years, Patient Airlift Service (PALS) has been a great partner.  They have given us the opportunity to fly 3-4 warriors on a private jet, multiple ballparks each year!  Wrigley Field, Fenway Park, PNC Park, Citizens Bank Park, White Sox Park and Yankee Stadium to name a few.  Earlier this year PALS provided an unforgettable experience at Fenway Park, home of the Boston Red Sox. 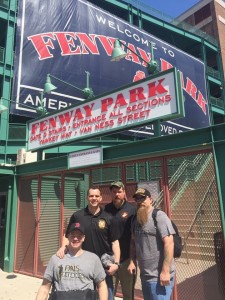 Today they were hosting heroes at another iconic stadium, Wrigley Field.  Wrigley Field was built in 1914 & is the 2nd oldest Major League Ballpark behind Fenway Park.  Wrigley is home to the World champion Chicago Cubs! 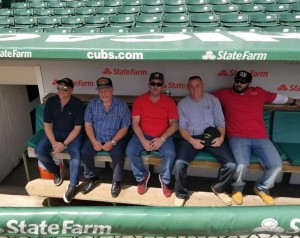 Unfortunately, my dad was in Pittsburgh making Wishes come true at the Pirates game and was unable to meet up with the warriors even though this experience was right in our “backyard.”

The warriors all enjoyed flying on a private jet to Chicago. They were treated to a nice dinner & a hotel before having the opportunity to tour Wrigley Field before the game.

They even got to hang out in the dugout with a few of the players!!!

Unfortunately, the Cubs were crushed by the Colorado Rockies & lost 9-1.

At the end of the day, we are pretty sure the score didn’t really matter, because despite the loss, they all had an unforgettable experience!

One of the Warriors had Cubs pitcher John Lackey take the hat off his head, autograph  it and the give  it to him.  That’s priceless stuff!

Operation Warrior Wishes would like to thank the Chicago Cubs and PALS for providing this memorable experience for these deserving warriors.

Most importantly, we want to thank Valdemar, Alex & Brian for your service & sacrifices to our country. It’s appreciated, has not gone unnoticed & will never be forgotten!

My dad will be in Pittsburgh later today making wishes come true at the Pirates game.  Stay tuned for more details! 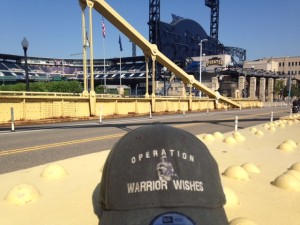