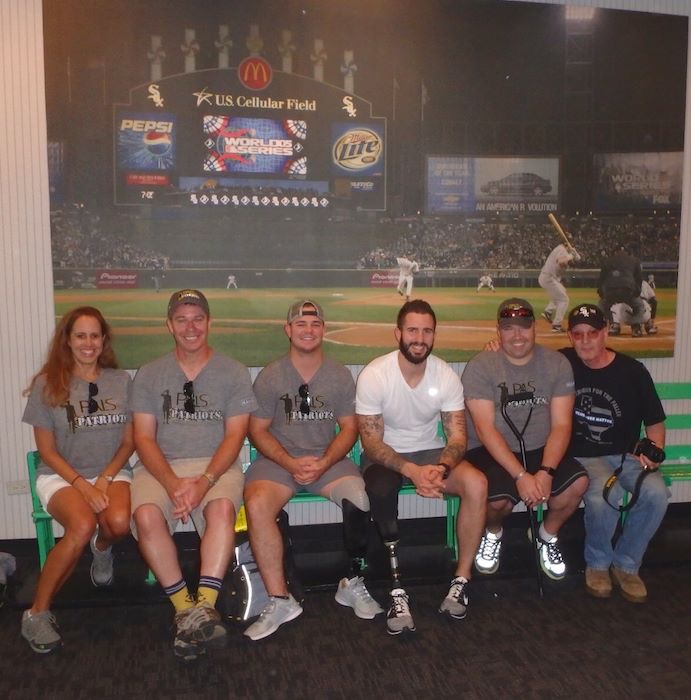 Our partnership with PALS (Patient AirLift Services) has really grown as we teamed up to  host warriors for the 4th time this summer.  PALS has already made Warrior Wishes Come True at the Phillies, Red Sox & Cubs games.  This time They were hosting heroes at the Chicago White Sox game.

Thankfully my dad was in town, so he met up with the pilots & Warriors at the stadium.  He was excited to reconnect with Joey, a warrior that he hosted at this years Orioles game in Baltimore.  He was honored to meet Chris and Mattnew for the first time.  My dad presented all the warriors with New Era White Sox caps and got a few pics, before sitting down in a suite to watch an exciting back and forth game that the White Sox ultimately won 4-2 .

We want to thank PALS for their continued partnership and thank the White Sox for helping us create once in a lifetime memories for these wasrriors. Our next scheduled PALS /Warrior Wishes Experience is Sept 24 in Pittsburgh. Stay tuned for more details.

We also want to say Thank You to Sgt Joey Welsh, Marine Chris Cowan and Sgt Matthew White for your service & sacrifices to our country.  It is appreciated, has not gone unnoticed & will never be forgotten.  Learn more about the warriors below.

SGT Welsh struggles with severe migraine headaches and loss of memory which has gradually become worse since 2008. He sustained a shoulder and back injury, both requiring surgery. Most recently, SGT Welsh suffered a stroke in June of 2015.

SGT Welsh is married to Jennifer Welsh, and has five children, Kailee (20), Kira (17), Ethan (3) Eli (3), Zoey (9 months). He has one grandchild Ava Castro (1). Upon retirement SGT Welsh’s short term goals are to return to his wife’s home state of Washington and work for a government agency in Emergency Management such as FEMA. His long term goals are to finish his bachelor’s degree and help other injured veterans transition back home from combat and injury.

U.S. Army Sgt. Matthew White was born and raised in Columbus, Ohio. He was highly active in athletics for as long as he can remember, and loved playing basketball and football in high school. White graduated in June 2007 and immediately enrolled in the United States Army. After completing basic training, Advanced Individual Training and Airborne school, White was assigned to the 82nd Airborne Division at Fort Bragg, North Carolina.

While serving with the 82nd Airborne, Sgt. White deployed twice to Afghanistan in support of Operation Enduring Freedom. On May 8, 2010, while on a dismounted foot patrol with his squad in one of the most volatile areas in Afghanistan, White was struck by an improvised explosive devise (IED). Immediately following the blast, he was evacuated to Walter Reed Army Medical Center in Bethesda, Maryland. After many surgeries, his right leg was amputated below the knee. During his years of service, White received several accolades including a Purple Heart, Combat Infantryman Badge and Parachutist Badge.

In 2016, Sgt. White graduated from the Catholic University of America with a Bachelor’s of Arts in Interdisciplinary Studies. Currently, Sgt. White as a contractor in Washington D.C. for the Federal Government with his two dogs Nike and Toffee.

I’m  originally from Anniston, Al. I enlisted in the Marine Corps in May 2013. I attended recruit training at Paris Island and I graduated in August of 2013 and went to Camp Geiger for SOI. I graduated from Infantry training battalion in November of 2013 and was assigned to 2/2 Golf Co. I went to Bridgeport, Ca for cold weather training in January of 2015 and in March I went to Norway for Operation Cold Response 14. I was appointed as my squad’s designated marksman and I went to ITX in 29 Palms in May and then deployed to Romania in August. I did multiple training exercises with various countries. I came back from deployment in January of 2015. I had planned on doing MSG but I was involved in a motorcycle accident which resulted in the amputation of my left leg. I was sent to Walter Reed where I am currently being treated.