We are back in action, Making Warrior Wishes come true! My dad had a nice little break to plan our upcoming “All32in17” mission & it’s almost time to kickoff our 2018 season. But, my dad being my dad, wanted to save some money & honor more warriors on his way to Philadelphia for the 1st official game of our mission.

So instead of flying to Philly, he bussed to Cleveland to host warriors at The Indians game tonight. After the game, he’s jumping on his 2nd of 5 overnight busses this week to Pittsburgh to host warriors at the Pirates game. He will be in Philadelphia Thursday, Boston Friday, Washington DC Saturday, Baltimore Sunday & Oakland on Sunday! Yes, my dad is crazy! But throughout the crazy schedule, he will personally host warriors at 7 games in 7 days & show them that their services and sacrifices are appreciated!

Since we began our mission 6 years ago, we have been honored to host more than 4,000 veterans & Gold Star families at more than 800 events across the country. It has been an amazing life changing journey that has given us a deep appreciation for everyone who has served our country. We are forever grateful.

Today we are honored to be hosting Army Captain Holly Koester & Marine Cpl Joshua Sust as well as 2 Gold Star families in their loved ones honor. Army PFC Heath Warner and Marine PVT Devin Grella sacrificed everything so we could have something & we want their loved ones to know that they will never be forgotten!

My dad arrived in Cleveland, via Greyhound bus at around 5:00 PM. He immediately made his way down to our friends at Harry Buffalo to meet the warriors for dinner before the game. 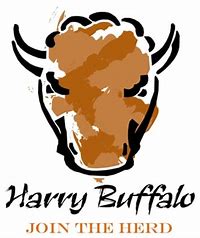 Our pregame meal is one of my dad’s favorite parts of each mission because it gives everyone the chance to get to know one another.  While everyone enjoyed their meal, My dad learned that Holly’s Caregiver was an Air Force veteran, Josh’s cousin served in the Army for 18 years & Denny Grella, Devin’s father, served in the Marines!

After dinner, the group walked over to Progressive field, home of the Cleveland Indians. The Indians have always been an amazing organization to work with throughout the years. They genuinely appreciate the sacrifices the brave men & women who serve our country make & always do their best to provide unforgettable experiences to the warriors we host.

Once inside the stadium, the group met up with Anthony, a team representative. Anthony escorted the entire group down on the field to watch batting practice & the pregame warm ups. 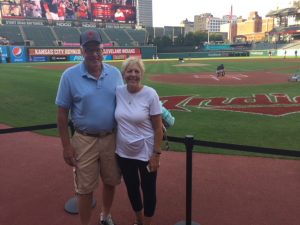 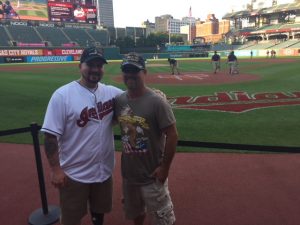 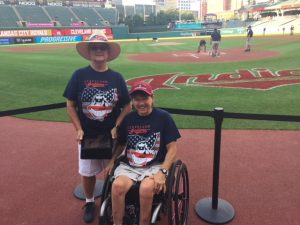 The Indians surprised us and gave Josh and holly the opportunity of a lifetime to throw out the first pitch of the game! 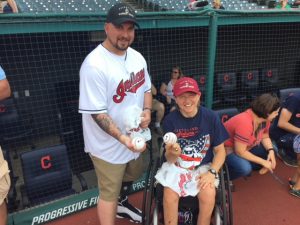 You could see the excitement – and a little nervousness- in both Of their faces as they waited anxiously on the field to get their moment to shine.  Both warriors tossed balls “just a bit outside” but enjoyed the experience! 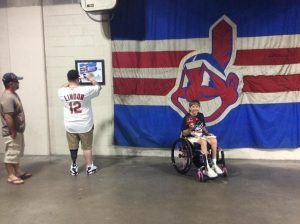 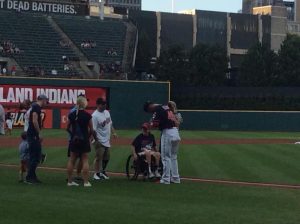 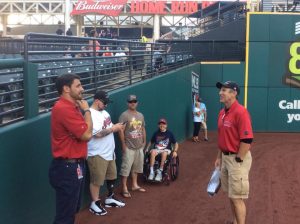 Eventually everyone made it to their seats to watch their first place Indians take on the Royals. Francisco Lindor led off the game with a home run and the Tribe never looked back! They went on to make the warriors very happy & beat the Royals 9-3. 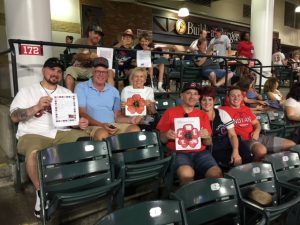 Operation Warrior wishes would like to thank Rebecca, Anthony and the entire Cleveland Indians staff for their continued support. It was an unforgettable experience & we couldn’t have made it so special without you! We also would like to send a special thanks to our friends at New Era Cap for hooking up he group with new Indians caps & last but not least we want to thank Jillian at Harry Buffalo
for once again providing the delicious Pre Game meals!

My Dad will be back on the bus tonight headed towards Pittsburgh to make Wishes come true at tomorrow nights Pirates game.  Stay tuned for more details!