After traveling over 30,000 miles and hosting more than 150 Warriors at 43 NFL games in 4 months, it was time to make warrior wishes come true at Super Bowl 50! 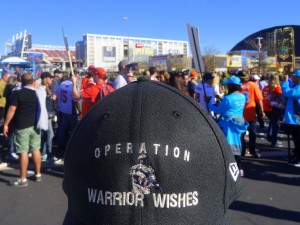 My dad spent all week in San Francisco making warrior wishes come true at events all over the city, leading up to the big game. I was able to honor heroes at some of those events the last few days. 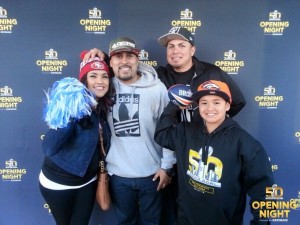 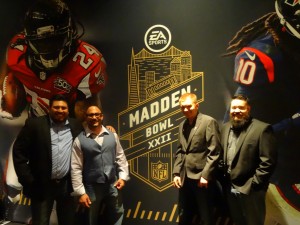 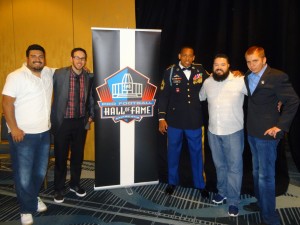 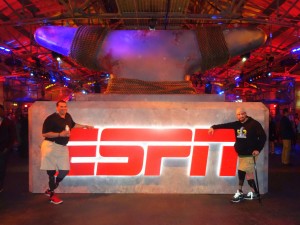 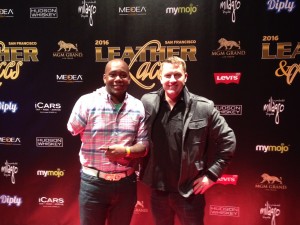 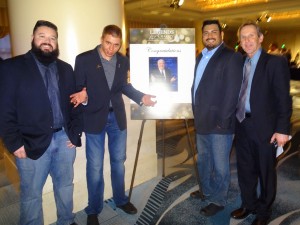 Throughout the week it was an honor to host over 20 Warriors at 11 different Super Bowl events. Now it is showtime …Super Bowl Sunday!  Our final game of the 2015 season honoring Army Sgt Joel Tavera, his dad (served 25 years in both Marines and Army) and Army MSgt Cedric King. 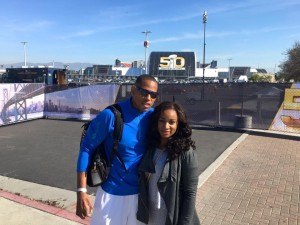 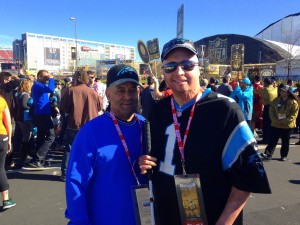 This Super Bowl Sunday was one of our biggest logistical challenges – although we had flown Cedric in earlier in the week, Sgt Tavera and his dad couldn’t get a flight until Sunday AM arriving at 12:30 for a 3:30 kickoff 45 minutes away.

Everything had to be perfect – the flight had to be on time, we needed an uber driver nearby & most of all, little to no traffic.

My dad went to airport at 7am to trace all steps necessary to make sure everything went perfect . He made arrangements to have bags stored at airport til after the game, called police to get special parking spot for Uber to pick us up , made arrangements for late checkin at hotel, etc. That effort paid off – thanks to a little help from Me back home.  For this of you who have been following us for a while, you know my dad isn’t very tech savvy.  So I had to get him an uber because he was clueless to how it worked… 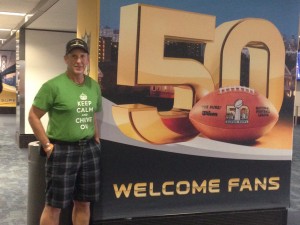 Thankfully the flight landed right on time.  My dad Met Sgt Tavera at the baggage claim & took his bags 50 feet to storage, walked another 50 feet to the Uber waiting for them right outside, and we were off . Surprisingly traffic was not bad cuz officials urged everyone to take public transportation and most did. 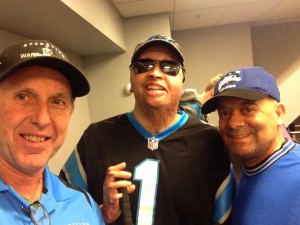 My dad got to know Joel & his dad on the 45 minute drive from San Francisco to Santa Clara.  (You can see Joel’s Bio below.).

They arrived at Levi Stadium with time to spare.  My dad walked them as close to the stadium as he could to take a few pictures before they headed inside to watch their Carolina Panthers take on the Denver Broncos in Super Bowl 50! 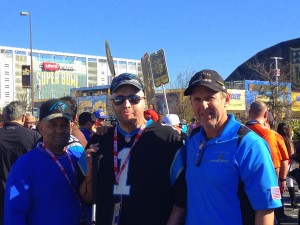 Our plan worked perfectly!  Now that they were inside enjoying themselves, My dad made his way down the street to watch the game at a local hotel. 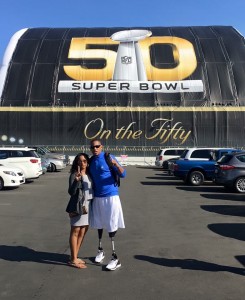 Cedric had arrived to the stadium much earlier and was already inside enjoying the Super Bowl atmosphere.  Excitement was all around – clearly Broncos fans outnumbered Panthers fans 3 to 1, but the Warriors were all rooting for Panthers, so we were too. It didn’t look good early, as Carolina fell behind 10-0 early, but were able to hang around most of the game even though they never were able to take the lead – this was ironic as they rarely trailed the entire season.

At halftime Cedric made his way through the crowd to meet up with Joel & his dad.  He said it wasn’t easy, but he was able to send us we a great photo of them together laughing it up and having a good time while enjoying the Super Bowl . 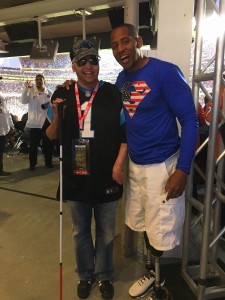 Unfortunately for them, the Panthers could never quite get going and a late 4th qtr fumble and a Broncos touchdown pretty much sealed their fate.  The Denver Broncos went on to win Super Bowl 50 By the score of 24-10.

Although disappointed, Sgt Tavera , his dad and MSgt King all had a great time and wished the Broncos congratulations- and who would have expected anything less from some true American heroes!!!

After the game the Tusca Restaurant, in the Hyatt hotel nearby, hosted everyone for a post game meal before heading back to the airport to pick up their luggage and check into the hotel.

Operation Warrior Wishes would like to extend a huge THANK YOU to our friends at ESPN for helping us secure tickets to the Big Game, Tusca For providing the post game meal,  Staybridge Suites in San Bruno for providing accommodations for SGT Tavera  and his dad, our friend Lou for letting us stay all week and helping us get around town.  most importantly we want to thank SGT Tavera, his father & MSGT King for your service, sacrifices & your inspirational never give up attitudes!  It’s a true honor to call you friends.

We also want to thank everyone who helped us make this Super Bowl Week Special for all the Warriors & everyone who helped make our entire 2015 season a huge success!  We were able to make Warrior Wishes come true at 44 NFL games this year!  We could have never made it all possible without all the support!

My dad will be taking a few weeks off to catch up with the family & to set up our spring “Battlefields to Ballfields” mission.  Stay tuned for the schedule & don’t forget to nominate your hero! 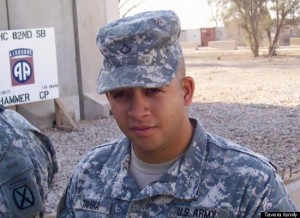 Army SGT Joel Tavera followed in his dad’s footsteps and joined the military.

On March 12th 2008, while serving in Iraq, Joel was riding in an SUV with four other soldiers when he felt a sense of fear like none he’d ever experienced. He opened his back door right before the rocket landed on the vehicle. Three of the other soldiers died in the blast. He thinks that open door saved his life.

His last memories of sight: light, blue sky, the sun and the face of Capt. Kevin Lombardo, who came to his rescue.
Lombardo kept Tavera alert as he put on a tourniquet by talking about family, baseball and a tattoo on Tavera’s right arm: “Hebrews 4:12,” under a cross, signifying two blades. It’s one of his favorite verses.

For the word of God is alive and active. Sharper than any double-edged sword, it penetrates even to dividing soul and spirit, joints and marrow; it judges the thoughts and attitudes of the heart.

The blast stole four fingers on Army Sgt. Joel Tavera’s left hand, destroyed his right leg, caused brain trauma, burned more than 60 percent of his body and left him blind, but It didn’t take his life.

Tavera isn’t sure how he lived, how he pulled through 81 days in a coma or 60 plus surgeries that patched him together. He leans on God’s word and figures the Lord must have plans for him.

“Not every soldier is like that,” he said. “Some choose to give up, but … my life is not over with.”

Joel says “Who I was then did die, but the new Tavera is, in many ways, better.” And, he believes, blessed.

Tavera received the Purple Heart and Bronze Star for his service, but he barely talked those first two years and got around in a wheelchair. These days, he’s making up for it. He is asked to speak at events often. He writes poetry and is working on a book. He wrote an inspirational song, Just to Be With You, soon after he learned that he was blind.

Being blind is a challenge he embraces.
“I see people for who they really are,” he said. “There’s no going back. If there were, I don’t know if I would.”

We are honored to be hosting Army SGT Joel Tavera & his dad, who also served our country for over 25 years, at the Super Bowl to cheer on their favorite team. 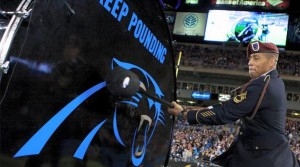 On July 25th 2012 Cedric was serving in Afghanistan. At the time he was a platoon Sargent & As usual, he received the coordinates of where to go, just like every day, setting out 10-15 minutes later and getting fired upon, which was nothing new. The only thing different on that particular day was that this was a new sector.

Cedric’s team happened to be covering for another platoon. They were bringing a group of guys to cover when Cedric’s right foot stepped on an IED.
He didn’t know what had happened. In fact, he thought at first that he had just been blown back by the blast. The men around him were hurt too, but Cedric received the majority of the injuries, although at the time, he didn’t realize it.

He said, “I was really upset that I didn’t get a chance to finish getting the guys who were shooting at us,” but he said that wore off soon and started gasping for air. He looked at his body and quickly realized that it was mangled. Soon, the helicopter arrived to take Cedric and the other injured men to the closest base, Kandahar. Cedric said that once at the army base, he had no recollection of anything until he woke up a week later on August 1 at Walter Reed.

Cedric lost both of his legs above the knee in the blast. He credits his Family and faith for motivating him to always push his limits and never give up. “These two elements helped me when I didn’t want to get up. Faith helps me believe in a brighter future. Faith keeps me going—this didn’t happen for nothing. I believe in a higher power who loves me enough to say, I’m not doing this to hurt you, I’m doing this to help you.’”

His family, which includes his wife and children, is there for him constantly. Cedric says, “There are people around me who love me, not because I had legs, not because I was strong, not because I could pick up my kids. They love me for the part of me that you can’t see. They love me for what’s on the inside. That’s the part of you they can’t smell, they can’t see.”
Cedric wants to live life the way that He did before or better, as if nothing ever happened. “I’ve got every excuse to say ‘Its too much,’ but I won’t. To me, it’s not awe-inspiring like it is to everyone else. To me, it’s a frame of mind that separates me between now and who I used to be. The injury is big in other people’s eyes. To me, it’s not that big of a deal (any more). It’s a shift in consciousness. The reason why this happened was to make me better…to make me stronger…to expose my best part in me. By not complaining, it makes it better.”

If that doesn’t inspire you, this will. MSgt Cedric King lets nothing stand in his way! On November 2nd, 2014, Cedric set his sights on crossing the finish line at the New York City Marathon. During the grueling 26 mile trek, one of Cedric’s prosthetic legs broke. He lost invaluable time as he waited to get it fixed.

King knelt down and prayed. He put one foot in front of the other & never looked back. After all the crowds had gone home & clean up crews were sweeping the streets, Cedric King crossed the finish line 10 hours after starting the race.

So what if he was one of the last people to cross the finish line? He did it, he displayed strength in the face of adversity, courage in the face of peril, and the willingness to stand up and fight no matter what the cost.

Master Sgt Cedric King recently retired from the army and moved out of Walter Reed back to North Carolina with his family. Cedric is a huge Panthers fan! He is a motivational speaker, a mentor and a true inspiration.