Happy Thanksgiving everyone!  This year, as always, we have a lot to be thankful for.  Good health, loving family, a career, etc.  we are also thankful for all the brave men and women who have served and are serving our country.  We know there are a lot of warriors overseas defending our country away from their families today so we can be safe at home with ours.

My dad & I traded in our traditional turkey dinner and drove to Green Bay to host Army Warrior Steven Reilly at the Packers game.
This wasn’t just any Packers game, the Bears were in town & Brett Favre was at Lambeau having his number retired.  Steve was beyond excited when he learned he would have the opportunity to be at the game.
My dad & I left Chicago at around 12:30pm in the pouring down rain.  The forecast was not promising.  It called for 90% rain & barely above freezing temps for the entire day.

We cautiously navigated the rain soaked roads and arrived in Green Bay at around 4:30pm to meet up with Steve at the Tompa tailgate. 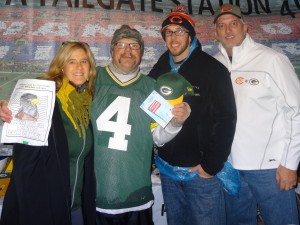 Steve shared a little bit about his story with us at the tailgate before we made our way over to the stadium in the freezing cold rain.  (see his bio below) 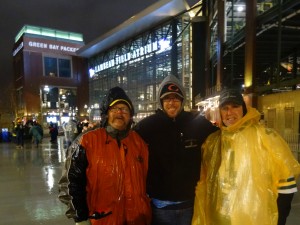 Tickets to this game were tough to get and very expensive.  Having said that, we only got 2.  I walked with steve & my dad to the stadium, but watched the game across the street at Krolls.

Just before Steve entered Lambeau field, I asked him what he thought of the experience so far & he helped put things in perspective.  Despite the awful weather conditions, he said “All I know is that it’t not 120-130 degrees & I’m not out in Iraq.  I’m at Lambeau Field going to watch a football game.”
How could we complain about the weather now?  Gotta keep everything in perspective…

My dad & Steve got to warm up before kickoff in the Lambeau Field Atrium & were treated to a delicous meal at Lambeau Fields newest restaurant, 1919 Kitchen & Tap.  Inspiration for 1919 Kitchen & Tap was pulled from the feedback of area residents, their love of great food and their appreciation for authenticity. In keeping with those values, the menu is focused on taking new approaches to old favorites. The restaurant incorporates fresh and seasonal ingredients into its offerings, with an emphasis on sourcing locally.  In addition to the great food, 1919 Kitchen & Tap has 80 beer taps with nearly 40 rotating types, a variety of bottled beers, and a selection of thoughtful cocktails.

1919 Kitchen & Tap features industrial, yet warm and rustic finishes to complement the welcoming atmosphere you have come to expect from Lambeau Field. It’s a casual restaurant with an elevated approach, bringing the Green Bay area a deliciously different dining experience.

Everyone in Green Bay anxiously anticipated halftime.  Somehow the Bears had the lead at the half and if was time to watch Brett Favre take the field one last time to have his number retired. 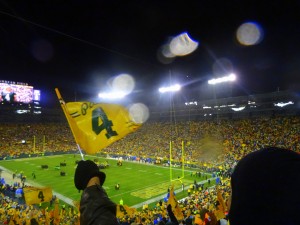 Bears & Packers fans both applauded showing the ultimate respect for one of the most passionate quarterbacks to ever play the game.  Bart Starr also took to the field to congratulate Favre on his achievement.  It was an incredible football moment.

After the ceremony half the stadium had emptied as the rain continued to come down.  Temperatures were expected to fall creating icy road conditions.  Considering we had a 4 hour drive back home & I had to work Friday morning, we played it safe and left the game a little early to beat the traffic & icy roads.
Our cars tired had sunken into the grass & ankle deep water surrounded the drivers side door.  We barely made it out of the mud pit we parked in, but eventually got home safe at around 2:30am & it was still raining….
We would like to thank the Tompa’s for hosting us at their tailgate, 1919 Kitchen & Tap for providing a delicious pregame meal, New Era for providing Steve with a brand new Packers cap, & most importantly we would like to thank Steve for his selfless service & sacrifices. 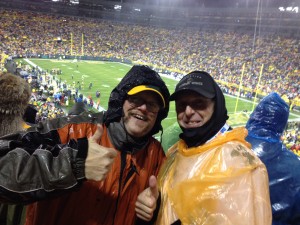 My dad will be heading to Nashville to host warriors at the Predators game Saturday, Indy to make warrior wishes come true at the Colts game Sunday & I will be teaming up with him in Cleveland to honor heroes at the Browns game Monday. 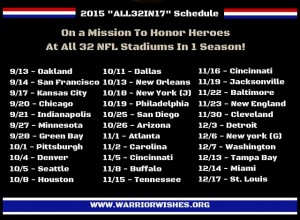 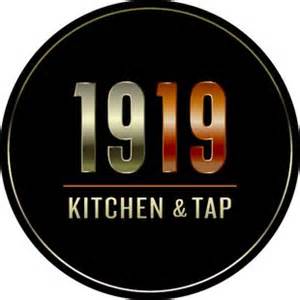 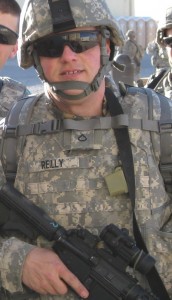 After 911 like many others I was upset. We were at war. I was in good physical shape and I wanted to join up and serve my country. You see my family has a long history of serving and I was one of the few that had not. I knew I was older- but I wasn’t going to let it stop me. I honored my mother’s wishes and did not join up. You see her father was in WWI(on the German side) and my father’s uncle was also in WW I on the US Side. She knew the meaning of war. And she also new I was a father with a young family. Again, I honored her request. In 2007 my mother passed. Shortly after I found I could just make the age cut off and joined up. So I did. I made it to basic training the day before the age cut off which at that time in 2008 was 40 years old. I reported to Ft Sill OK.  ‘Home of the Field Artillery’. Same place my Uncle Peter went to in WWII. I remember the sign at 0233 hrs in the morning as I drove in the gates ‘Soldiering starts here’. From 2008 on I was pretty much all active duty. Even though I joined the national guard. I went to AIT. But 2 days before graduation I was called out of formation and found out the great state of WI had done a state wide call up and I was part of it. I was to report in to headquarters in Appleton as soon as my plane landed with my current orders and all papers I rcv’d from graduation from the AIT(Addition Combat Training) to HQ. It was confirmed. I was to be home 6 days and 6 nights. I was assigned to an infantry unit and I would be a gunner. I was off to TX for 9 weeks and would serve Iraq in combat operations with approx. 4600 other men and women from WI. I served in Iraq from 2009-2010. Honorably.

After my return home, I will admit I had trouble adjusting back to civilian life. But with help I found my way.
Its a little known fact that 23 veterans a day take their own life. I personally want to see that change by being involved in various groups like the VetCenter and my Local Veterans of Foreign Wars like my post I so love:  Post 7784. And recently I was elected in the state of Wisconsin to the position of Sargent- at- Arms. My mission is simple. If I can stop one brother or sister to seek help and not self medicate and find the light and impact one life, I have accomplished something that matters.
Would I do it all over again? Serve my country? Protect the American Values and American ways of life?
Protect and serve the innocent that don’t have a voice?  Heck yes I would!
I am proud to have served in the same unit as my father and follow many of my family who have and are still serving this great nation of the free and the brave.
I am also proud to have served with 4600 other men and women from WI. The Red Arrow Division.  ‘Les Terribles’ As the French named them in WWI. Which in English meant: ‘The Terrible Terrors’.  We had each others back and there wasn’t nothing either of us wouldn’t have done for each other from the top on down. Period.
Since my service I have never looked at our nation’s beautiful flag the same. Call me arrogant,  but really… The United States of America has the most beautiful flag in the world.
Love0 Share Tweet Share Pin
Tags: All32in17, Football, Green Bay, Green Bay Packers, New Era, NFL, Packers, Tompa Tailgate, Warrior Wishes