Marine Lance Cpl. Scott Krutchen stared death in the face & lived to tell about it. To the naked eye it’s hard you would never know Scott was blown up. He has both legs, both arms, and doesn’t appear to have any disabilities. However, the mental wounds he suffered in the attack cut deeper than the physical wounds he suffered.

On November 8th 2004, Lance Cpl. Kruchten was riding in a humvee, while on patrol in Iraq, when it struck a 500 pound bomb that blew a small crater in the earth and tossed his vehicle over 80 feet. The blast destroyed the Humvee down to two front tires and an engine,

Krutchen suffered a broken leg, rib, a chipped shoulder, a Traumatic Brain Injury & worst of all he lost 3 friends in the cowardly attack. Scott spent time rehabbing at Walter Reed before heading back home to Wisconsin. He is an avid Packers fan & was excited for the opportunity to go down on the field & watch his packers take on the Bears!

Brian Jopek joined the Army National Guard in 1990. He served our country for over 20 years before medically retiring in 2011. Brian is also a Gold Star Dad. His son, Ryan Jopek followed in his footsteps and joined the National Guard in 2003. He deployed to Iraq in 2005.

In August of 2006, Ryan volunteered to go on a convoy security mission to Mosul, Iraq. During the convoy back from Mosul, his vehicle was hit by an IED. The blast took Ryan’s life but his legacy lives on.

Brian told us how big of a bears fan his son was. Ryan nicknamed his restored 1966 Chevy Pick up truck “Walter” after his favorite player & was laid to rest wearing a Walter Payton jersey & his favorite bears cap. 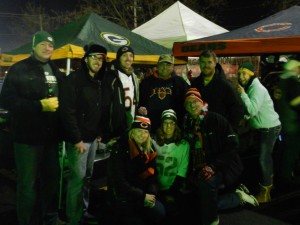