US Army retired CW2 Kevin Crook was in a helicopter crash in 2006. He sustained a broken back from this crash. The damage from this crash ended his career in 2009 and he was medically retired in 2010.

Kevin has been a Chicago bears fan since he was a small child. Kevin now lives in the St Louis area & has always wanted to attend a Bears vs Rams game in St. Louis.

When he found out his Bears would be playing the Rams this year, his wife said “he had a huge smile on his face.”  But when they looked up the ticket prices the smile instantly disappeared.

We were honored to help put that smile back on Kevins face and made his Warrior Wish come true in St Louis at the Rams game. 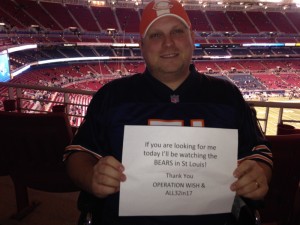