After a day full of “Steel City” surprises, we got a great night sleep at a hotel.  It was the first time in almost a week since my dad slept in a bed.  Feeling refreshed, my Dad & I were up early to host Army SGT Josh Furlong AKA “Furdiddy” at tours of PNC Park & Heinz Field. 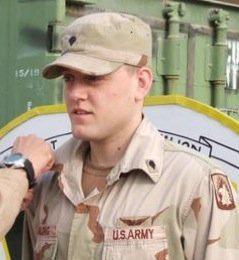 SGT Furlong served 13 years in the Army.  A few of Josh’s friends never made it home & when Josh returned home from deployment to Afghanistan, he struggled with PTSD and ended up homeless, in jail, and even attempted to end his life.  Today Josh has turned his life around and has become an advocate and mentor to help Warriors that are dealing with similar issues. 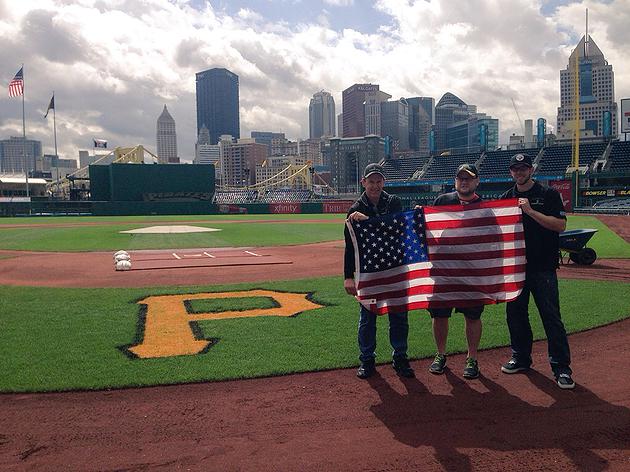 Josh presented us with an American flag at PNC park that was flown on a mission while he was serving in Afghanistan.  It was an amazing surprise and something that will proudly be displayed! 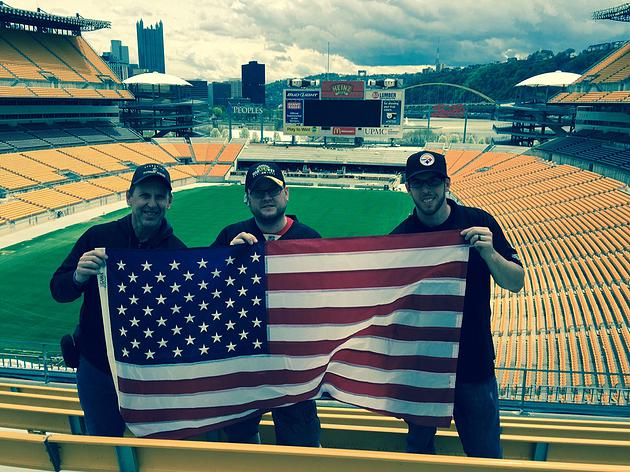 We had originally planned to make Warrior Wishes come true at the pirates game tonight but when we heard there was rain in the forecast & a Penguins playoff game being played down the road, we reached out to The Penguins to see if they could help us make a few warrior wishes come true.

See how the Penguins made warrior wishes come true in 2014! 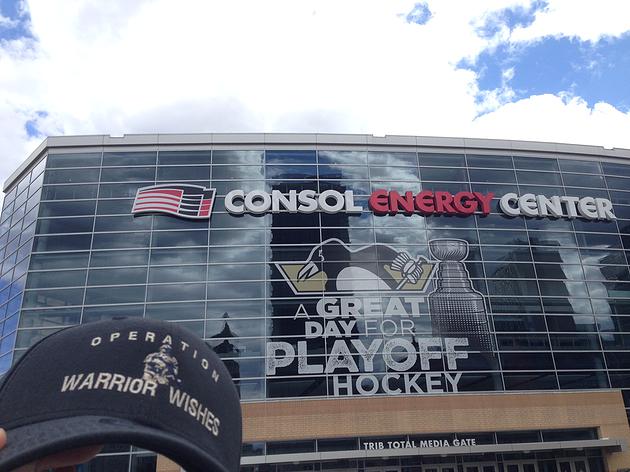 Julie from the Penguins went above & beyond to help and donated her 2 tickets to help us honor SGT Furlong & Army SGT Rob Easley at game 3 of Penguins playoff series with the Rangers.

SGT Easley, is one of the biggest Penguins fans in the world.  We learned about the donated tickets about 5 hours before the puck dropped.  When we called Rob to invite him to join us, he made no hesitation & immediately jumped in a car with his wife to drive over 3 hours from Walter Reed in Bethesda, MD to attend the game!

SGT Easley joined the Army with a friend.  He had plans to join Special Forces.  On June 4th, 2008 3 members of Rob’s 8-person team were killed in action.

Once he returned home from his first deployment, Rob made the decision to deepen his skills & endured yearlong training to be an Explosive Ordinance Disposal (EOD) Technician.

In January 2012 Easley deployed to Afghanistan as part of Operation Enduring Freedom.

On October 15, 2012, Rob’s 3-man team was called to disarm two discovered IED’s.  Rob stepped on a third undiscovered IED, which instantly exploded.  The blast resulted in the amputation of both legs, and partial amputations of fingers on his right hand.

Rob hasn’t let his traumatic injuries keep him down.  Thanks to the great people at Walter Reed & his never give up attitude, determination & support from family & friends, especially his wife, Megan, Rob was up on prosthetics legs quickly. Rob says his wife Is the most important person in his life.

Today Rob continues to rehab at Walter Reed.  He enjoys playing wheelchair rugby & plays for theUSA Warriors Sled hockey team.  He is a Pittsburgh native & as I mentioned before, the biggest Penguins fan we have ever met! 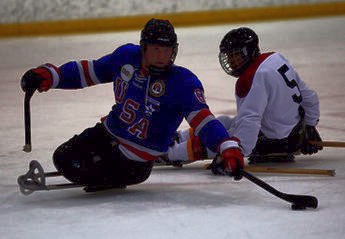 Operation Warrior Wishes is honored to host these brave heroes at the Penguins game.  We would like to thank Julie & the Pittsburgh Penguins for helping us make these #WarriorWishes come true! The Penguins even gave SGT Easley & SGT Furlong recognition for their service at the game by putting a message on the scoreboard!   We would also like to thank our friend George in Pittsburgh for securing a ticket for SGT Easley’s wife and letting my dad crash at your place tonight. 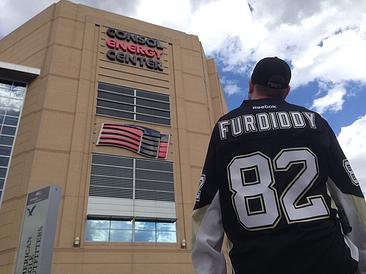 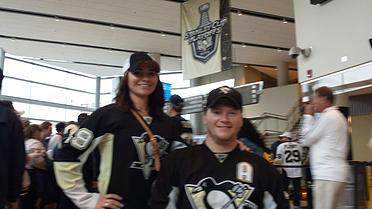 My dad will be back on the bus first thing in the morning and heading to Philadelphia to make warrior wishes come true at our 22nd game in the last 20 days on our #BattlefieldsToBallfields Mission.

This was our 21st game of making Wishes come true in 19 days.  Learn more about ourBattlefields to Ballfields Mission, Nominate Your Hero for an upcoming game, Get involved, Make a Donation & Buy Warrior Wishes gear at http://warriorwishes.org/