After a crazy day in Baltimore, my dad hopped on a bus to Washington DC to catch a flight to Tampa.  He spent less than 10 hours making Warrior Wishes come true in Tampa before hopping on another bus for 5 hours and finally arrived in Miami to sleep at the airport before making Warrior Wishes come true at our 28th game in the past 26 days on our Battlefields to Ballfields Mission. 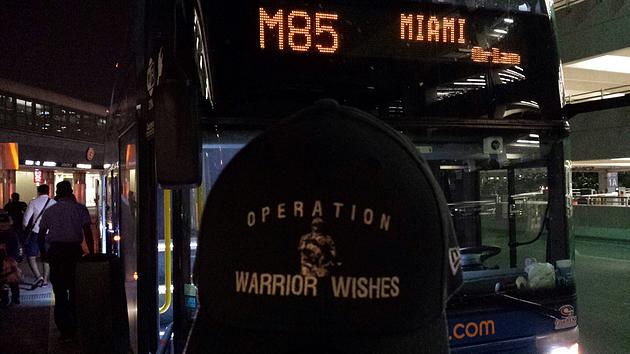 Today the Miami Marlins helped us make Warrior Wishes come true & honor the legacies of Army warriors Captain Joseph McClimans, SGT Thomas Bohall, SFC Larry Vaquero-Lugo & Navy HN William Ortega.  (Learn more about the soldiers below) The Marlins went above and beyond to host these soldiers’ surviving family members & gave them a onve in a lifetime experience at the game. 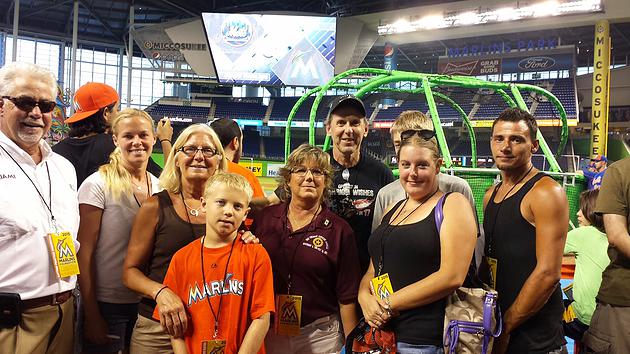 Before the game, the Gold Star Families were treated to field passes to watch the Marlins take batting practice.  Players stopped by to sign autographs, take photos & thank the families for their loved ones service and ultimate sacrifice. 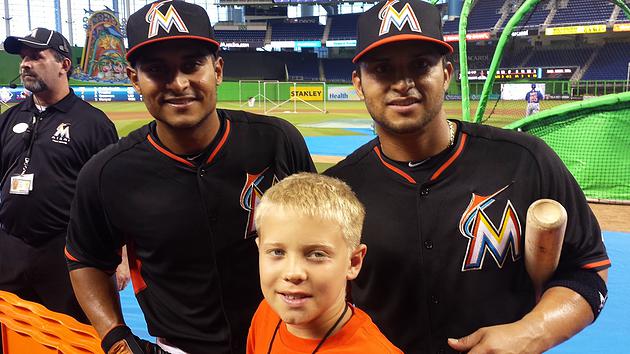 Just before the National Anthem, the Marlins recognized the families on the field & had a moment of silence to honor the legacies of the fallen soldiers.  It was a powerful moment that brought tears to the eyes of many in attendance. 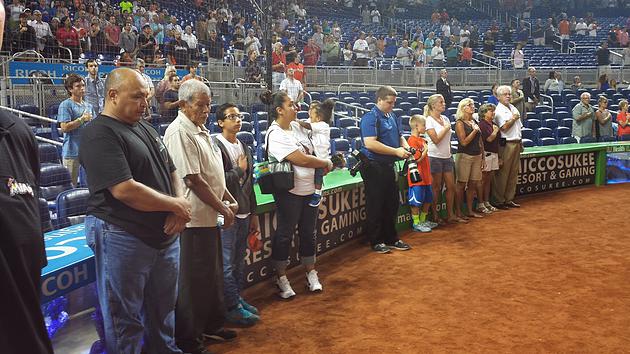 Operation Warrior Wishes would like to thank the Miami Marlins for going above and beyond to honor the legacies of these brave soldiers who made the ultimate sacrifice for our country.  We would also like thank New Era for providing Marlins caps for the Gold Star Families.

For the first time in a week, my dad will be sleeping in a bed and got a hotel.  He will be up early to finalize details for tomorrow’s game and make warrior wishes come true for a group of wounded warriors thanks to the Marlins! 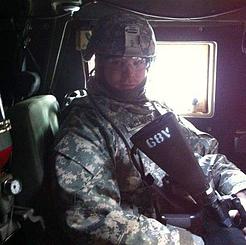 Army capt McClimans Joined the Army in 2003.  He served as a registered nurse.  On his first deployment, Josh deployed to Iraq for 15 months.  Throughout his deployment McClimans flew 86 severely wounded soldiers to safety and provided the care they needed in an Army hospital in Germany.  Although josh had many fears during the long flights, where they were shot at by enemy fire, he felt it was his duty to take care of the wounded as they also had families that they needed to safely get back home to.

McClimans was a proud US soldier that once said “I’m not a hero, I take care of heroes.”  He was a good-hearted person. who got along with everyone, and was always willing to help out.  Josh was also a proud father and always made time for family.  He coached his son’s football & wrestling team and was also very involved with the boy scouts.

Due to his dedication and patriotism, Josh didn’t hesitate when he was called into action for a 2nd time.  On April 22nd 2011, McClimans was walking to the hospital to start his shift in the ER when he was hit by enemy fire.   Army Captain Joshua McClimans made the ultimate sacrifice.

Captain McClimans’ life on earth ended way too soon.  He left behind a young family that needed him.  He had so many unfulfilled dreams and so many plans for the future.  The McCliman family learned a lot from their hero, & continue to keep his legacy alive.  They want to remind everyone to be grateful for family and friends & make the most of every situation regardless of what the situation may be.  Live every day like it’s your last because you never know when it will be, and lastly BE PROUD TO BE AN AMERICAN!  It was an honor to host his family at the Marlins game in his Captain Joshua McClimans honor. 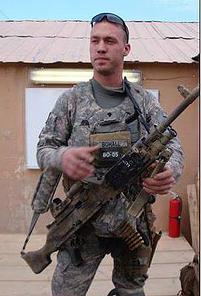 In 2005 Thomas Bohall joined the Army & excelled in the infantry. He was ultimately rewarded by being selected to test for the Army Pathfinders, an elite force of highly trained soldiers whose primary missions were to make rescues of surviving passengers and secure downed aircraft, and to engage the enemy during reconnaissance missions behind enemy lines. Thomas passed the rigorous Pathfinder selection process and was assigned to the 101st Airborne Division, Pathfinders Team 3 at Ft. Campbell, KY.

Thomas was deployed in Afghanistan when he was killed in action on May 26th, 2011 by multiple IED attacks while on a reconnaissance mission behind enemy lines during his fourth combat deployment.

SGT Bohall left behind a young wife and a three year old daughter, along with his parents and 3 siblings & Although SGT Bohall is no longer physically with us, his legacy lives on. We are forever grateful for his & his family’s service & sacrifice.  It was an honor to host his parents at the Marlins game in his honor. 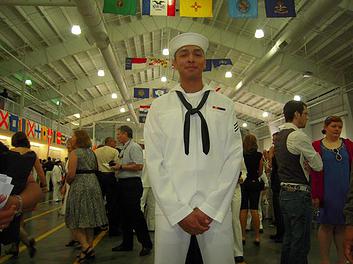 William Ortega, 23, of Miami  joined the U.S. Navy in May 2008 and moved to Camp Pendleton in California to train as a corpsman, which is similar to a medic.  Friends and family knew he wanted to serve his country.

HN Ortega is survived by his parents, five sisters, a brother-in-law, and grandparents.  It was an honor to host surviving family members at the Marlins game in his honor.