The Marlins did an amazing job helping us honor Gold Star families & wounded warriors at back to back games.  Unfortunately My dad had to leave the marlins game early last night to start making his way to Atlanta to make warrior wishes come true at the Braves game. 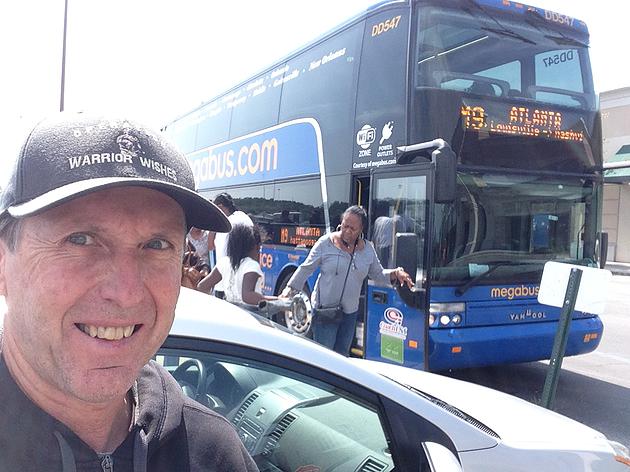 Eventually he was able to get on a bus thru Tallahassee that took much longer than a direct trip to Atlanta.  Having said that, he spent the entire day riding on the bus and did not make it to Atlanta in time to host the warriors at the braves game, on the bright side at least his bus was still on all four wheels.  More importantly, the hiccup did not stop us from making Warrior Wishes come true! 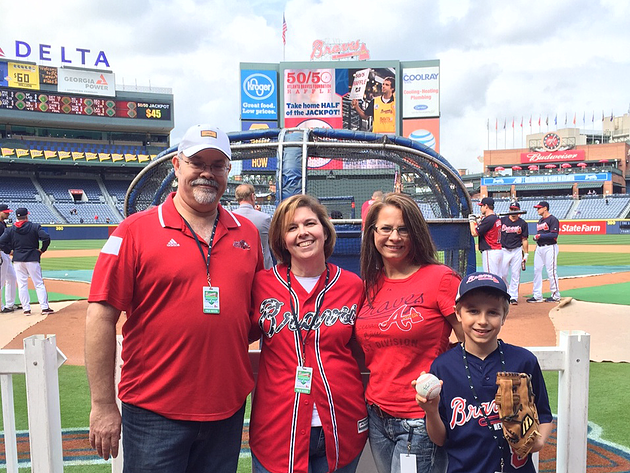 Since my dad’s didn’t make it to Braves game in time to host, we would like to thank Michelle, the survivor outreach coordinator in Atlanta for stepping in to help coordinate everyone.  We would also like to thank Jarod and the Atlanta braves for going above and beyond to provide the warriors & their families a once in a lifetime Braves experience & helping us honor these brave soldiers by providing tickets and Batting Practice field passes, New Era Caps provided Braves caps for the warriors & their families, and Whole foods for provided lunch before the game! 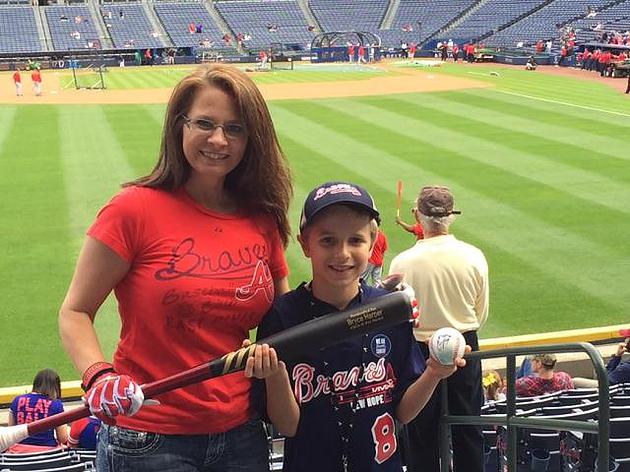 The highlight of the day came when Washington Nationals Star outfielder. Bryce Harper gave Army CW4 Clifford Branson’s son, Jayden, his bat after he took Batting Practice!  He also collected autographs from a few Braves players and got batting gloves from Ian Desmond! 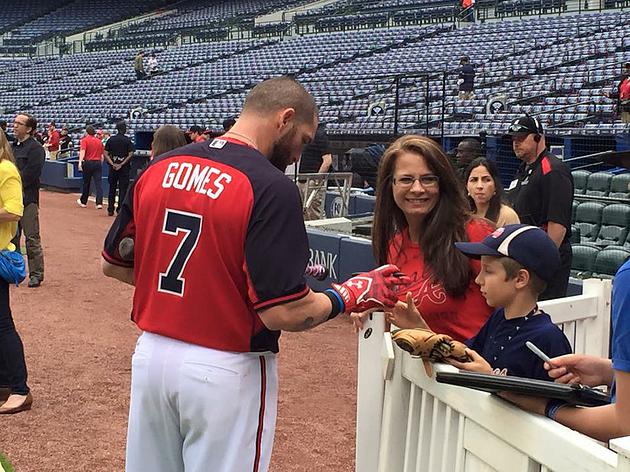 It’s now midnight on the east coast and my dad has officially arrived in the ATL.  He plans to sleep over at the Bus station & work overnight and I’m hoping that his phone doesn’t get stolen again like the last time he was in Atlanta sleeping at the bus station.  He will be honoring a few warriors &Gold Star Families at the Braves game again tomorrow at our 31st game in 29 days on ourBattlefields to Ballfields Mission! 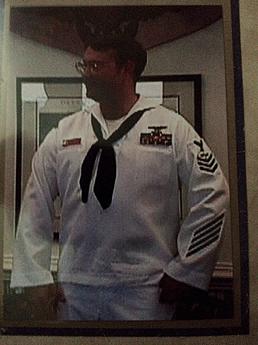 Retired PO1 Stephen Wayne Daigle was born in Pasadena Texas on July 20, 1964 and seventeen years later before he had even graduated from high school he had signed up to join the Navy.  Leaving home just a few months after graduation to go to Great Lakes Illinois for basic training.  PO1 Daigle found a career that was filled with many adventures that included 10 years at sea on five different Aircraft Carriers and a Destroyer as a Jet Engine Mechanic.  He has traveled to Asia, Africa, Europe, Australia, and North and South America.  While serving as a Navy Recruiter in Council Bluffs Iowa in the summer of 1999 Stephen met his wife; Patricia and her daughter’s Alexandria and Shannon, and they were married and became a family the following spring.

In August of 1999, while deployed on the Aircraft Carrier Harry S. Truman during training exercises for a major battle group deployment; Stephen and four other airman were manually loading an external fuel tank onto an F-18 Super Hornet when there was a miss step; PO1 Daigle stepped up to save his fellow airman from getting crushed by the weight of the tank.  In doing so, PO1 Daigle suffered multiple fractures to his vertebrae and ligament tears in both ankles.  After being medevac’d off of the Aircraft Carrier; he reported to Portsmouth Naval Hospital in Portsmouth Virginia where he had his first of four surgeries; the first one on his back, the next two on his ankles and then the last on his back that resulted in having a titanium rod and screws placed for added support along his spine due to the fractures and degeneration.  It was made very clear to PO1 Daigle from the beginning that he would not be able to return to working as a jet engine mechanic; and thus he spent his time while recovering from his four surgeries on light/limited duty as the Chief Safety Officer at the Wing Command at Oceana Naval Air Station, Virginia.  In September 2003 after serving 20 years in the Navy PO1 Stephen Wayne Daigle was medically retired.

Since his retirement PO1 Daigle has worked as a travel agent and for the past seven and a half years he has been working for Department of Homeland Security with TSA as a Behavioral Detection Officer in Birmingham Alabama.  He and his wife Patricia enjoy traveling when their schedules permit as well as being major supporters of their college football team at Jacksonville State University in Jacksonville Alabama.  When they aren’t rooting for JSU they are splitting their time rooting for University of Southern Mississippi Golden Eagles where their older daughter is in Graduate Studies; or Mississippi State University Bulldogs where their younger daughter will be receiving her Undergraduate Degree on May 8th.

While PO1 Daigle’s injury was not in the heat of battle, he showed his fellow service men and woman what it means to put yourself before others no matter what the cost.  He would rather have taken the pain then watched someone else get hurt; he says that it is what he would expect any of his fellow sailors to have done if they had been in his shoes.  His recovery from his injuries was not an easy journey, and at times he felt very lost and without support; but leaning on his family and close friends helped get him through.  While he is unable to do many things he enjoyed doing before his injury, he is grateful that he is still here to be able to enjoy his life with his wife and daughters. 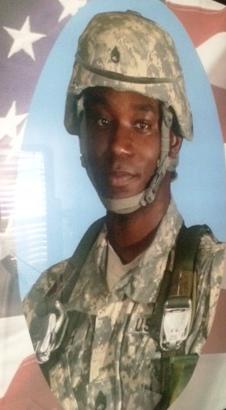 Christopher graduated early as a Senior in January 2006.  He immediately joined the Army in February 2006.

Christopher didn’t put people down he always lifted them up.  Which he felt it was a proud privilege to be a soldier (leader).

As an Army Soldier Christopher was Disciplined, Fierce, Loyal, Respectful, gave Selfless Service, fulfilled his Duty with Integrity, Honor,  Pride in his unit and his country. 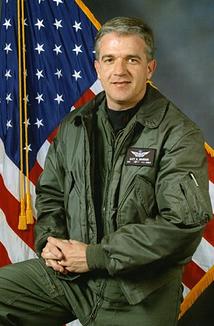 CW4 Cliff A. Branson was born April 06, 1962 in Montgomery, AL.  He attended college at University of Florida and University of Southern Mississippi where he also played football for the universities.  In 1984 he moved to Hillsdale, MI to spend some time with his dad’s family.  There he met Debbie LoPresto and they dated for a month and a half before he joined the Army.

In Sept 1985 while in flight school at Ft Rucker, AL, Cliff flew to MI to marry Debbie.  After finishing flight school, the couple moved to their first duty station at Ft Lewis, WA (1986-1989).  While there they welcomed their first child, Jeremy Alan.  From Washington they moved to Garlstedt, Germany (1989-1992).

In 1990 while in Germany, their second son, Jordan Terry was born.  Shortly after the birth of their second son, Branson was assigned to Desert Storm where he flew missions every day and was awarded the Bronze Star for his mission.  After a three year tour in Germany the family was assigned to Ft. Ord, CA (1992-1993). On driving out to California, the family stopped in Hillsdale, MI and gave birth to their third child, Kaitlyn Taylor.

The family ended up in Georgia in 1993, stationed at Ft.Gillem.  After three years at Gillem, Branson transferred from the Army to Active Duty National Guard and was stationed at Dobbins AFB where he actively participated in the GA RAID.  Thirteen years after the birth of their third child, the family had a welcomed surprise in Oct 2005 with the birth of their fourth child, Jayden Asher.

CW4 Cliff Branson died on Active Duty July 22, 2006 and was honored with a burial in Arlington Cemetery. His viewing and memorial showed the impact he made on so many lives. He flew the OH-58 helicopter and loved what he did.  He would volunteer for missions at home and abroad.  He was a Christian and was actively involved with the youth and playing the drums for the church band.  Branson’spriorities were God, Family and Country.  His greatest accomplishments were his four children and flying helicopters for the United States Army.