Surprise!!!… My Dad & I are teaming up to make Warrior Wishes Come True in Pittsburgh! 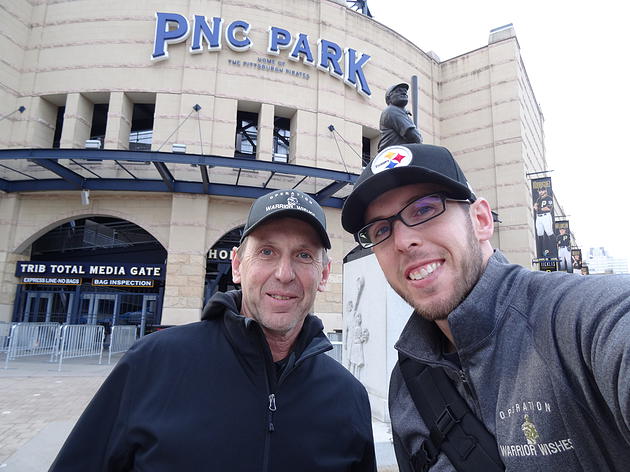 After my dad made Warrior Wishes come true in Pittsburgh for his 19th game in 17 days on ourBattlefields to Ballfields mission, he told me he was tired of staying at the bus stations.  Instead, he found himself at a 24 hour casino working on finalizing plans for upcoming events (BTW, my dad doesn’t gamble…)

Little did he know, I was on my way to Pittsburgh to surprise him and get back in action makingWarrior Wishes come true with my dad.

My dad was as surprised as SGT Jeremy Jackson was when he learned he was going to be our guest at the Pirates game!

We each gambled $20 at the casino, my dad won $6, before making our way up to the 4th floor of the parking garage to sleep in the “Sentra Hotel, aka our rental car.” 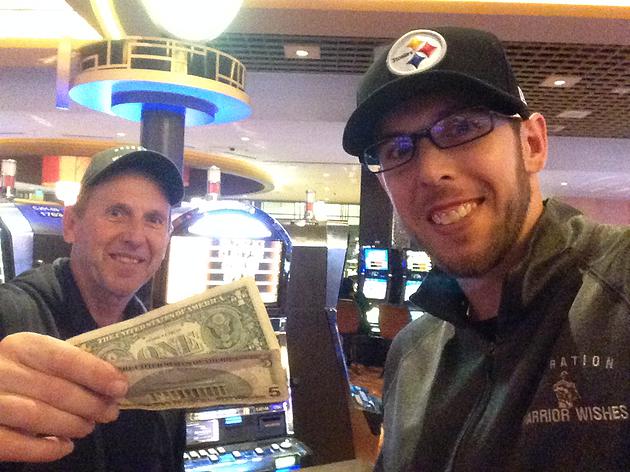 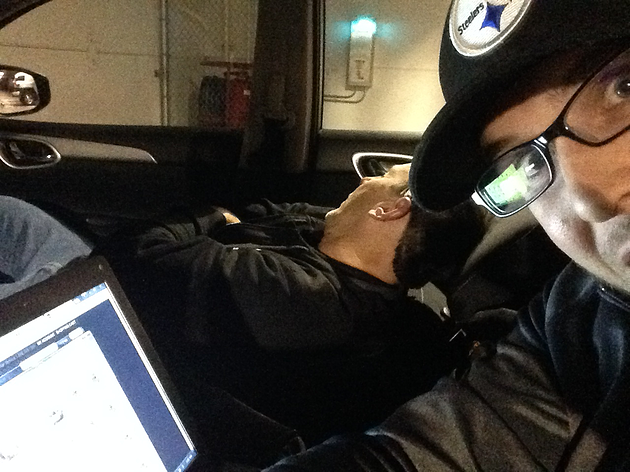 After a few hours of rest we will make our way over to Atrias to meet up with the warriors for brunch before heading over to PNC park to make warrior wishes come true! 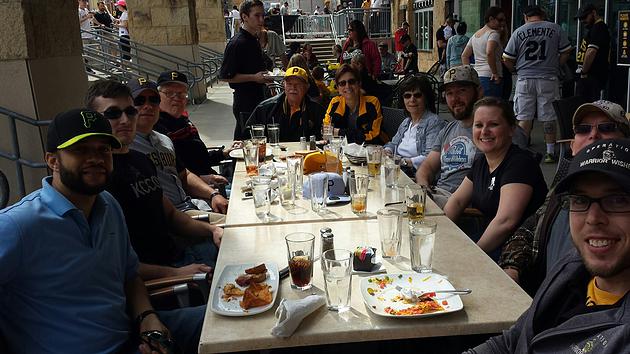 Today we have the honor of hosting a member from almost every branch of the military & a gold star family.  Representing the Marines Is SGT Jasper Helig & SGT Josh Caskey.  Representing the Army SGT Nate Lear & SGT Jeremy Jackson.  Representing the Navy corpsman Bethany Eller & her father Dave Eller. Representing the Air Force, SPC Hakeem Abdullah.  We also were proud to be honoring the legacy of Army SPC Robert Hall Jr at the pirates game.  (Learn more about the warriors below.) 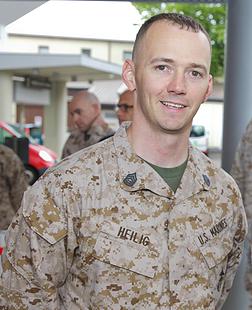 ​Jasper F. Heilig enlisted in the Marine Corps on July 21, 1998.  He served 15 years in the Marine Corps with 3 combat deployments. He retired from the Marines as a MSgt and currently works for the Semper Fi Fund as a Veteran to Veteran lead taking care of our Combat wounded troops.

Josh Caskey joined the Marine Corps in 1999 and was medically retired in 2012.  Josh served two tours in Iraq and 1 tour in Okinawa, Japan.

Josh was injured on his second tour in Iraq when a Vehicle Bourne Improvised Explosive Device drove into his Combat OutPost and detonated.  Thankfully the injuries were “relatively minor.”  Josh had shrapnel wounds, a Traumatic Brain Injury, as well as a messed up back and a fractured tailbone.  Despite the injuries Josh was able to finish out his second tour of duty.

Both of Josh’s brothers served in Iraq as well.  His younger brother, also a Marine, was killed in Afghanistan by a road-side bomb in June of 2010.

Josh is currently a junior at Robert Morris University.  He plans to begin a Masters Program for Instructional Leadership and a teaching certification next year after he graduates with his Bachelor’s Degree.

Nate served in the Army from 2005-2010.  He did 2 tours in Afghanistan and got out of service as an E5.  Nate is currently enrolled in the physical therapy assistant program at CCAC. 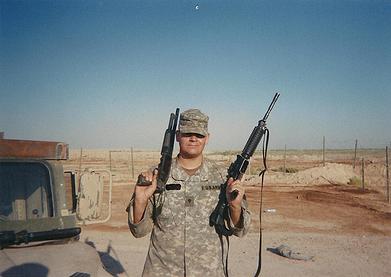 In August 2005,  SGT Jackson was deployed to Iraq when he was shot by an enemy sniper in his upper left arm and his unit was ambushed. The bullet went straight thru his arm and hit everything but the bone, completely destroying his main artery, nerves and muscles. He was medevaced out of Iraq and spent a year in the hospital. Jackson was presented the Purple Heart for his service & sacrifices.

Since the injury, Jeremy has endured multiple surgeries to try and repair the damage done, including nerve grafts, tendon transfers and plastic hand surgeries. His left arm and hand are now paralyzed.

Jeremy plans on attending the police academy this fall to better his future and life after injury.

Jeremy’s wife nominated him for this game and helped us surprise Jeremy with this experience.  it was an honor to host him & his family at the game today! 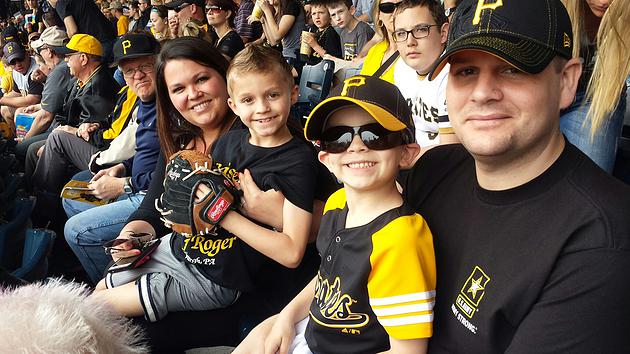 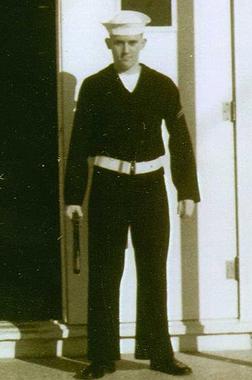 David Eller joins us today from Erie, PA. He served in the Navy from 1969 to 1973 as a helicopter search and rescue air crewman. He was stationed with HC-2 out of Lakehurst, NJ. He was deployed twice in the Mediterranean Sea on board the USS Franklin D. Roosevelt and the USS John F. Kennedy. Dave is currently enjoying retirement with travels and spending time with his family and grandchildren. 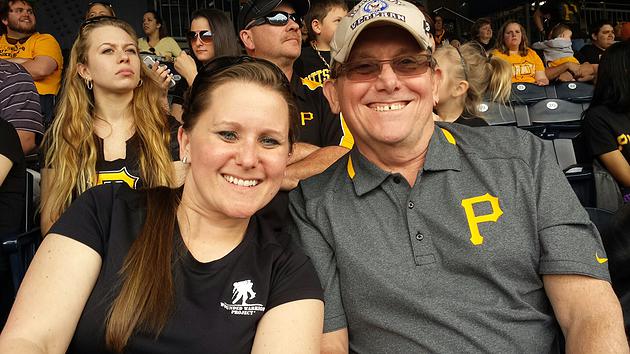 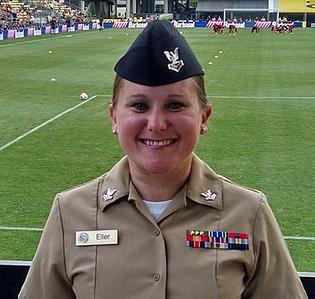 Petty Officer Second Class Bethany Eller followed in her fathers footsteps and dedicated 12 years of service in the Navy Reserve as a hospital corpsman with a specialty as a surgical technologist.

Bethany has been involved in several humanitarian missions over the years. In 2007 she traveled throughout Thailand with the Joint Forces Mission, Operation Cobra Gold. She also traveled to Haiti in 2010 after the earthquake as a medical support member for a Joint Force medical mission to aid a village 75 miles north of Port-Au-Prince.

Bethany then deployed in 2013 to Landstuhl Regional Medical Center in Landstuhl, Germany. Where she was assigned as a surgical technologist to assist in surgeries for those coming from Iraq, Afghanistan, and Africa. As well as performing surgery on those military members and their families serving across Europe.

Currently Petty Officer Eller resides in Columbus, OH where she works for Ohio Health Hospital as a surgical technologist and looks forward to continuing her service in the United States Navy until her retirement 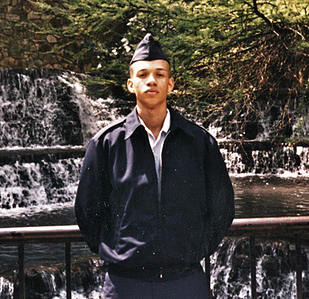 Made the ultimate sacrifice while ensuring the safety of his fellow soldiers on June 28, 2005 when a vehicle-borne improvised explosive device detonated near his dismounted position at the gate of his forward operating base in Dujayl, Iraq.  Hall was serving during operation Iraqi Freedom.

It’s was a true honor to share this warrior’s legacy & host his mom and other surviving family members at the Pirates game in his honor. 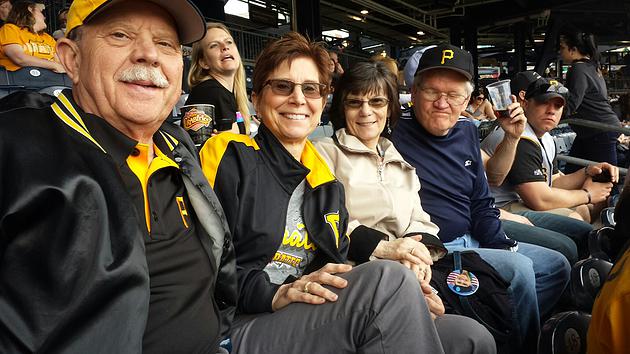 Today was an amazing day full of warrior wishes coming true!  It’s a good thing I made it out to Pittsburgh to help my dad since we hosted so many heroes!

Operation Warrior Wishes would like to thank Atrias for hosting us for Brunch & New Era for providing Pirates Caps for each of the warriors!

After the game today my dad & I had the opportunity to enjoy a famous Primanti Bros sandwich & since I haven’t slept in 2 days & my dad hasn’t slept in a bed for 3 days, we named our own price and got a cheap hotel to stay the night…. 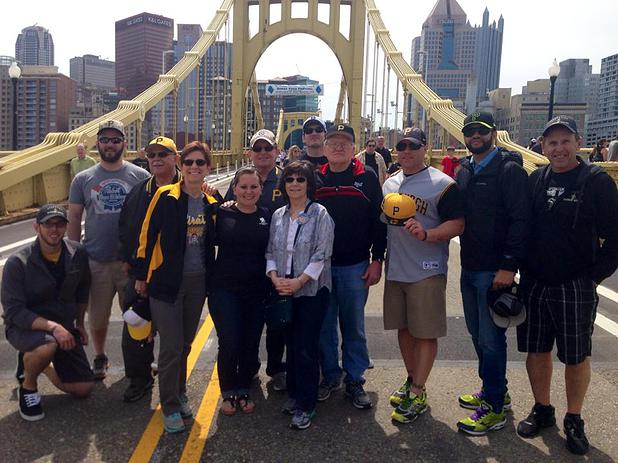 We will be in Pittsburgh for one more day before making our way across the state of Pennsylvania to make warrior wishes come true at a couple Phillies games!

This was our 20th game of making Wishes come true in 18 days.  Learn more about our Battlefields to Ballfields Mission, Nominate Your Hero for an upcoming game, Get involved, Make a Donation & Buy Warrior Wishes gear at http://warriorwishes.org/