My Dad spent the entire month of April on the road making Warrior Wishes come true!  On ourBattlefields to Ballfields mission we have honored about 100 warriors at 32 games from Chicago, Milwaukee, Detroit, Cincinnati, Cleveland, New York, Boston, Washington DC, Pittsburgh, Philadelphia, Baltimore, Tampa, Miami & Atlanta.  My dad continued the mission into May by taking a 15 hour bus ride from Atlanta to Texas and made Warrior Wishes come true at the Rangers game! 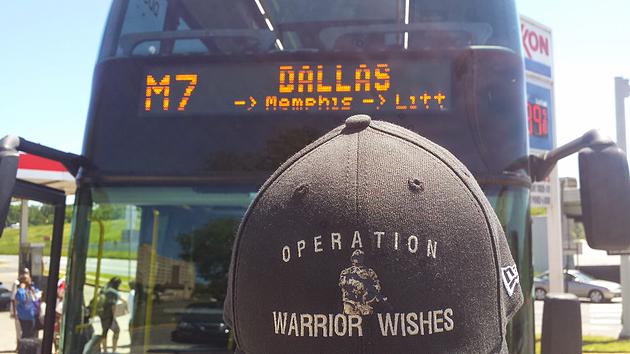 We were given a Texas sized welcome at the Rangers Game thanks to Globe Life Insurance.  Last year they helped us honor heroes in their suite and provided customized jerseys for each warrior and put a message on the scoreboard to welcome the warriors to the game.  This year was no different.  In fact, Globe life and the Texas Rangers helped us honor heroes at back to back games! 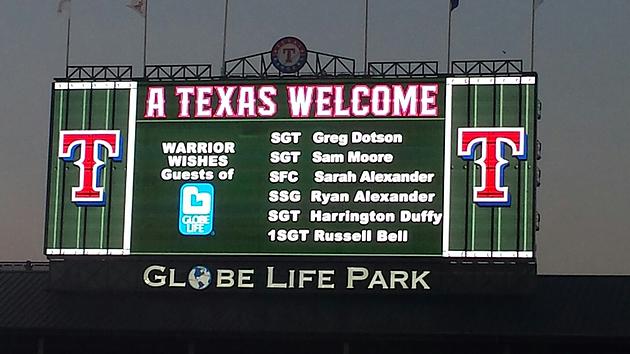 My Dad Arrived in the Arlington area on Friday afternoon just a few hours before the game to honor the legacy of SSG Robert E Thomas Jr & hosted his wife and daugher at the game in his honor.  (Learn more about SSG Thomas below) 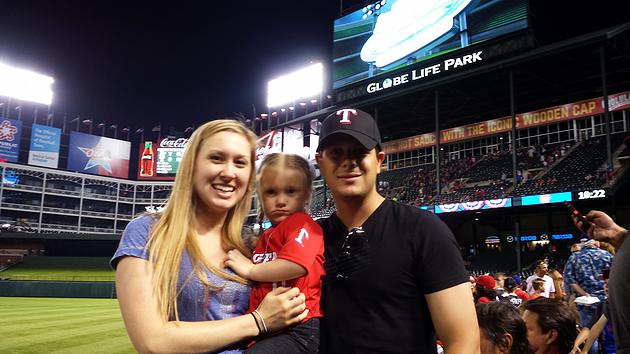 After the game, we were able to score a hotel for my dad for $38 and for the 5th time since beginning our Battlefields to Ballfields mission he was able to sleep in a bed and get a good night sleep. 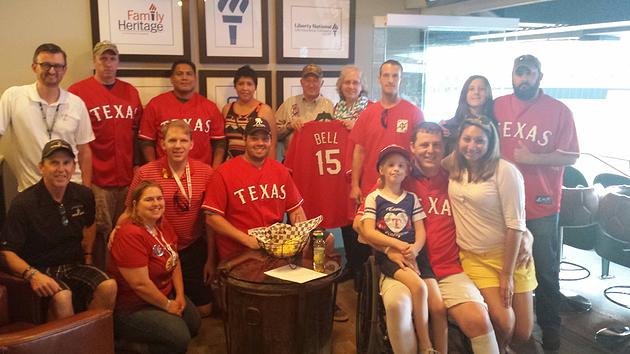 Thanks to Globe Life Insurance Company  & the Texas Rangers for providing this awesome experience, from suite tickets to custom Rangers jerseys for each warrior, you guys truly hit it out of the park! 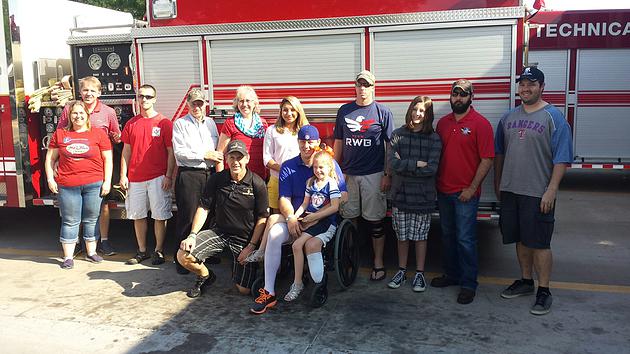 We would also like to thank the Arlington Fire Department for providing transportation for the warriors to the stadium on fire trucks & New Era for providing Rangers Caps.

The Rangers ended up winning the game in walk off fashion by the score of 8-7.

My Dad plans to stay up all night before catching a greyhound bus to Houston at 4am.  He will be making #WarriorWishes come true at the Astros afternoon game tomorrow! 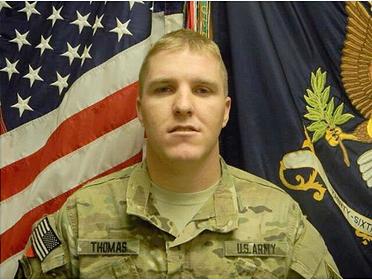 Staff Sergeant Robert Thomas was born on November 4, 1988 in San Bernardino, California. He graduated Etiwanda High School in June 2006. SSG Thomas enlisted in the Army on July 13, 2006. After the long 14 week training he was stationed at Fort Campbell, Kentucky where he was assigned to 1st Squadron, 75th Cavalry Regiment as an Assistant Gunner. In October 2007 he was deployed to Iraq in support of Operation Iraqi Freedom.  In August 2009 he married his wife Kristina. Then in October 2010 he deployed to Afghanistan in support of Operation Enduring Freedom as a Squad Leader. Their daughter Hailey was born January 2012. In April 2012 SSG Thomas reported to Ft Bliss, Texas.  He was assigned to 1st Battalion, 36th Infantry Regiment where he was immediately assigned as a Mortar Section Leader. He deployed in December 2012 to Afghanistan in Operation Enduring Freedom. He was injured in an explosion  in Afghanistan on April 21, 2013 and was in the ICU Burn Unit for almost 5 months before passing away on September 13, 2013 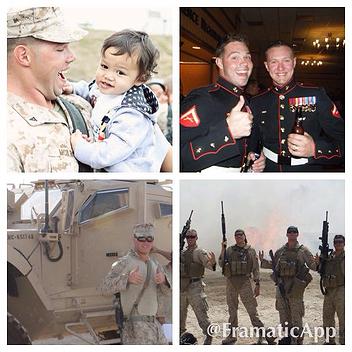 Cpl. Shawn A. McIlroy was born in North Richland Hills, TX on June 29th 1986. He graduated L.D. Bell High School in Bedford in 2004 before enlisting in the United States Marine Corps in December of 2006. While assigned to 1st Batallion 1stMarine Division, Bravo Company in Camp Pendleton, CA, he went on his first deployment in January of 2009 to conduct anti-piracy operations around the horn of Africa. During this time he participated in joint-training missions with the nations of Oman and Qatar teaching them infantry, counter terrorism tactics in an urban environment. At the end of this deployment, Shawn arrived home 10 days before our first child was born.

In October of 2009, Shawn was assigned to 3rd LAAD Batallionto teach them infantry tactics as well as how to properly conduct security patrols. He deployed to Afghanistan in February of 2010 just 7 months after his first child was born. 2 months prior to returning home on his one year wedding anniversary, his truck was struck was by an IED attack. Due to the traumatic injury he suffers from memory loss, as well as PTSD, and spinal issues. He received Good Conduct Medal, 2 Letters of Appreciation, 2 Sea Service Deployment Ribbon, NATO Medal – ISAF, 2 Certification of Appreciation, Global War on Terrorism, Global War on Terrorism Expeditionary, Navy Unit Commendation, Combat Action Ribbon, Afghanistan Campaign Medal and National Defense Service Medal. Shawn was honorably discharged in 2011. 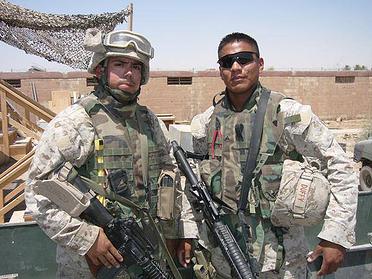 Harrington (Harry) Duffy isfrom the Mescalero Apache Indian Reservation in New Mexico. Graduated High School from Tularosa High School in 2003, and enlisted into the United States Marine Corps two months out of high school. His MOS was 2111, Armorer. he served a tour of duty in Operation Iraqi Freedom from March 2005 until October 2005, in AR Ramadi, Iraq. Harry also served a tour of duty in Operation Enduring Freedom from January 2009 until August 2009 In the Helmand Province of Afghanistan.

After leaving the Corps as a Corporal in 2009, He lived with his family, Jessica and thier daughter Scarlett Mattis, on the Reservation in New Mexico until 2013, when they moved to Odessa, Texas.

Harry has been following our mission for the past few years and we were honored to meet him last October when we were at the Dallas Cowboys game.  Harry says “It”s people (and Organizations) like yours that keeps us veterans knowing that we are appreciated for our service to our great country!” 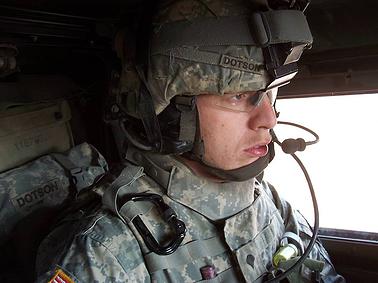 Gregory Dotson Served over 10 years in the army as line medic. Dotson was hit on a QRF mission to aide the Iraqi Police and lost his leg due to injuries from the blast that impacted the back of his Bradley directly below his legs. His right leg was salvaged with plates and screws. Greg also suffered a Traumatic Brain Injury in the blast & has been diagnosed with PTSD. In the ten months of his second deployment he treated 157 casualties, losing more than he cares to remember.

Today Greg is Married and a proud father of 6 girls. 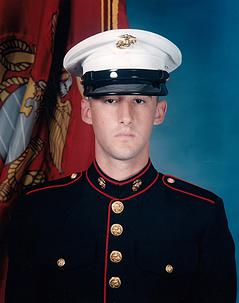 Marine SGT Samuel Moore. is a 32 years old, born in Nashville & grew up in Dallas. In 2002, shortly after that he joined the Marine Corps Reserve he had his son.  While

deployed to Iraq in 2005 where SGT Moorewas injured by a roadside IED.  To this day he continues to struggle with PTSD, but has made significant strides to improve his life. He maintains a home he & his son.  He has also earned an Associate’s degree and is currently working on a Bachelor’s in Ecology for Environmental Science at the University of North Texas. Sam enjoy anything outdoors especially fishing. 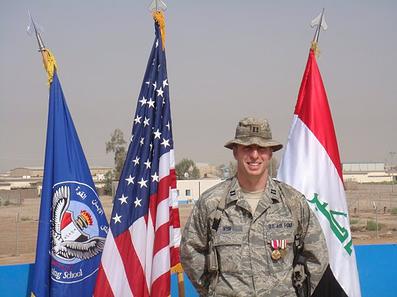 David is the Youngest of 5 boys raised in a single parent home on welfare.   One of his brothers served as a Marine for 20 years and another was in the Navy for 5.  Webb followed in his brothers footsteps & joined the Air Force in 1989.  He spent 4 years in the Air Force and Army Special Operations.

Throughout his carer, David served for 25.5 Years Active Duty.  11 years as an Enlisted Member & 14.5 years as a Commissioned Officer

While serving in Iraq, David spent a lot of time running on treadmills when he wasn’t put on misisons.  He continued to run when he got home and has completed 5 marathons (2 this year) & 2 half Ironman Triathlons and other shorter Triathalons as well.

Webb has two kids & is a proud grandfather.  His daughter Emily is married to an Active Duty Air Force Captain who is an Air Battle Manager stationed at Tinker AFB in OKC, they
have two children
His son lives in Omaha and goes to college at the same school I taught ROTC
at – University of Nebraska at Omaha.  He played a few years of baseball at
a junior college then a little at UNO 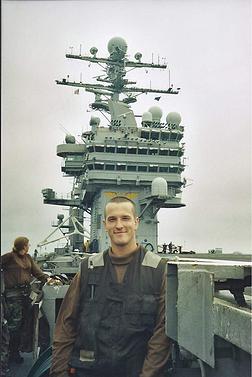 Adam was born and raised in Buffalo NY.  He joined the Navy after being unable to find a decent job using his associates degree in computer repair.  Munich served aboard the USS Nimitz as an avionics electrician technician & worked on F-18 hornets & super hornets.

Adam currently works as a network engineer in San Antonio Texas.  He also spends time working with an organization called team Red White & Blue who’s mission is to enrich the lives of american veterans through physical and social activity. 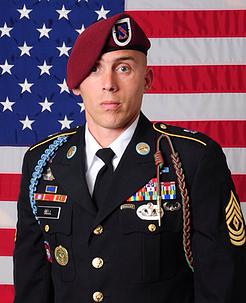 1st Sgt. Bell joined the Army on January 24, 1996 as an Infantryman, attending One Station Unit Training and U.S. Army Airborne School at Ft. Benning, Ga. before reporting to Camp Casey, Korea for his first assignment. After spending a year in Korea, 1st Sgt. Bell reported to Fort Bragg where he served at various levels in 1st Bn., 504th Parachute Infantry Regiment for more than five years and then transitioned to his drill sergeant duties at Fort Jackson, S.C.  Following his tour at Fort Jackson, 1st Sgt. Bell returned to the airborne community with the 508th PIR in Italy and subsequently returned to Fort Bragg where he served as a 1st Sgt. for more than three years in two different units, most recently with HHC, 1st Bn., 508th PIR.  This was his fourth combat deployment to Afghanistan over the course of seven years.

“1st Sgt. Russell Bell was one of the best all around leaders I have had the privilege of serving alongside in over 18 years of military service.” said Lt. Col. Ced Carrington, 1-508th Battalion Commander. “His presence alone made each day brighter.  He constantly shared stories that put smiles on Troopers’ faces.  He always looked for opportunities to make those around him laugh – particularly during tough situations.  1st Sgt. Bell made a difference every day and all who worked anywhere near him were immediately drawn to his personality.”

1Sgt Bell made the Ultimate Sacrifice on August 2nd 2012 while serving in Afghanistan when he and another soldier in his unit encountered and IED.