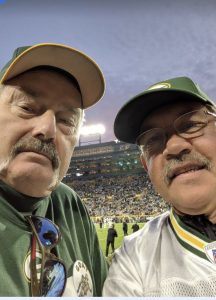 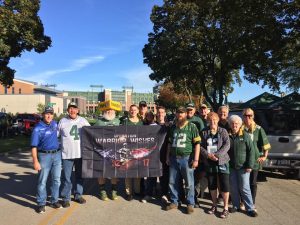 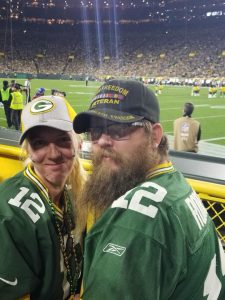 My dad made his way back home to meet up with Army Sgt James Fawbush and his wife for lunch at Giordano’s. They arrived in town early and are our guests for the Sunday afternoon Bears game. 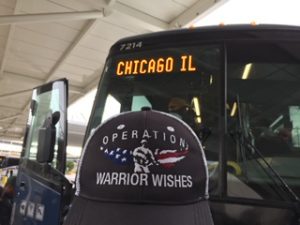 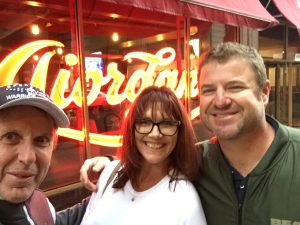 Eventually my dad made his way back home to get a good night sleep before heading back to O’Hare airport Saturday evening to catch his flight to Buffalo. 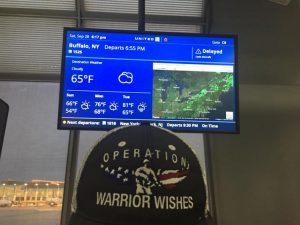 We have made some unforgettable memories in Buffalo throughout the years. My personal favorites include taking a tour of New Era, Watching Marcel Dareus hug one of the warriors on the sidelines and tailgating with Jim Kelly! 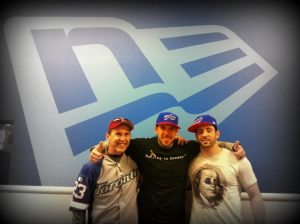 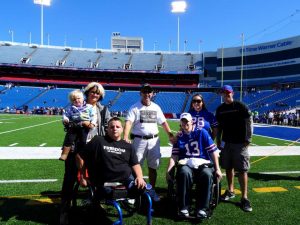 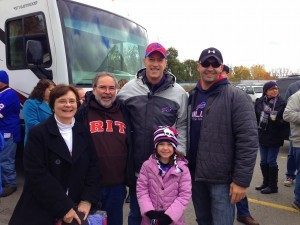 Upon arrival at the Buffalo/Niagra airport, my dad found a comfortable bench to rest up on and got a “good night sleep.”  First thing in the morning he grabbed an Uber to New Era stadium, home of the Buffalo Bills, to meet up with the Warriors at Danny’s South for breakfast. 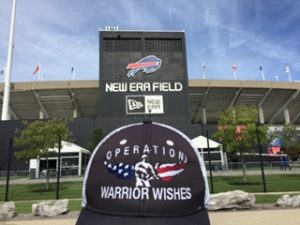 Today we had the honor of hosting Army Veterans Trendon Choe, David Timmerman and Jordan Brenden at the Bills game. 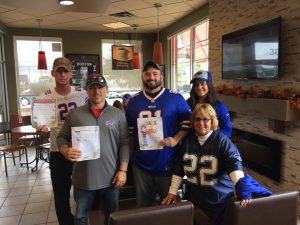 Sgt Trendon Choe served as a 13F, Fire Support Specialist for over 6 years in the US Army with the 2nd Battalion 22nd Infantry Unit,10th Mountain Division, out of Fort Drum, NY. As a fire support specialist his primarily responsible was for the intelligence activities of the Army’s field artillery team. His rank was Sergeant, where he led a COLT Team and Fire Support Team in support of combat operations in Kosovo, Afghanistan, and Iraq. He now works for the New York State Department of Environmental Conservation in Syracuse, where he lives with his Wife Valarie, and children Amara and Aspen.

Trendon actually nominated his Hero, his mom, for this experience! Trendon reaches out and said “ my mother has been my rock since joining the US Army. She has been there to support through deployments, and post deployments. She is a HUGE Buffalo Bills fan. I would love the honor to be able to provide a ‘special day’ for her, with her, at ‘The Ralph’ (now New Era) Stadium.” It’s an absolute honor to make this wish come true!

Army SSG David Timmerman was nominated for this experience by his brother in law, who says David is his Hero! SSG Timmerman proudly served our country for more than 18 years!

SSG Timmerman actually nominated SSG Jordan Brenden for the Bills experience. I’m David’s words “Jordan is preparing for his retirement from the Army. He served admirably, and is the epitome of great leadership. SSG Brenden is always there for his Soldiers on or off duty. He holds a special place in my heart because he saved my son’s life.” 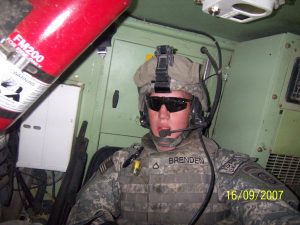 It was an absolute honor to hast these amazing men and make their Warrior Wishes come true! 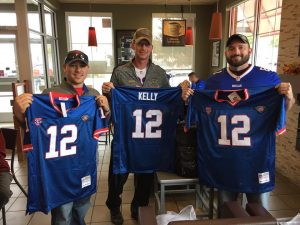 The group got to know each other over a quick meal at Danny’s South before heading over to a very special tailgate surprise. Danny’s South is the best place to hang out before and after Bills games. They have been helping us make Warrior Wishes come true since 2013 and we cannot thank them enough for their support!

Before making their way into the stadium, my dad led the group to Jim Kelly’s Tailgate! Jim Kelly is the Buffalo Bills legendary Hall of Fame Quarterback! He has been helping us make Warrior Wishes come true since we started our mission in 2012! 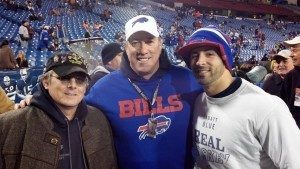 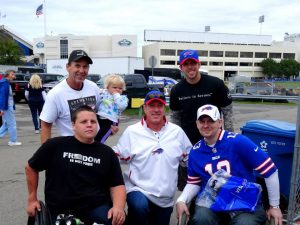 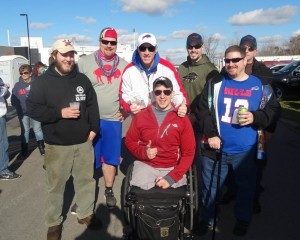 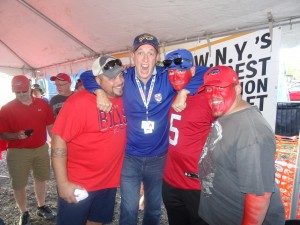 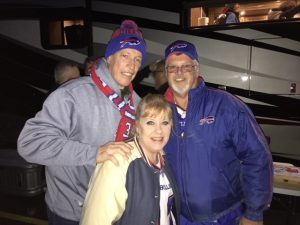 Jim is an inspiration, he never gives up and always takes his time to show his appreciation to those who sacrifice and serve. Today was no different. We presented the warriors with authentic Jim Kelly jerseys and Jim personally signed each of them for the warriors! 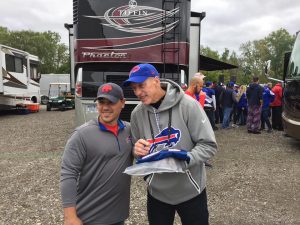 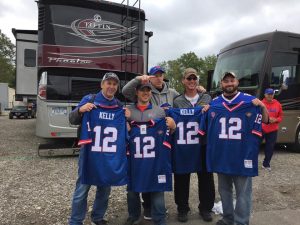 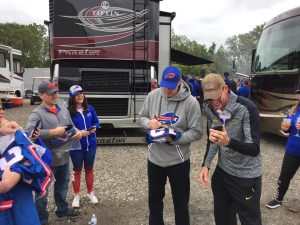 The group had the opportunity to hang out at the tailgate for a while before the game and also got to meet one of Jim’s friends, Bills Hall of Fame Running Back Thurman Thomas! 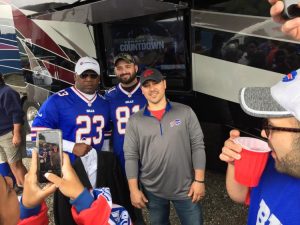 Eventually they made their way to their 2nd row seats behind the Bills bench to watch the undefeated Patriots kick things off against the undefeated Buffalo Bills! 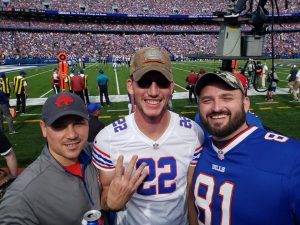 Things didn’t look good for the Bills early on, as the Patriots jumped out to a very early 13-0 lead after a blocked punt TD. But the Bills defense stepped up and shut down Tom Brady and the Patriots. They only allowed 3 more points the rest of the game! Unfortunately the Bills offense couldn’t come thru and the Bills fell short losing to the Patriots by the score of 16-10 and suffered their first loss of the season.

Despite the loss, it was an unforgettable day for everyone involved.  In SSG Brendan’s words it was an “Opportunity of a lifetime.” 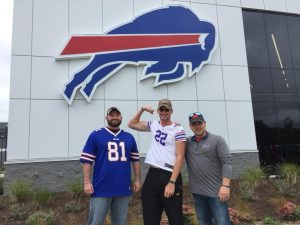 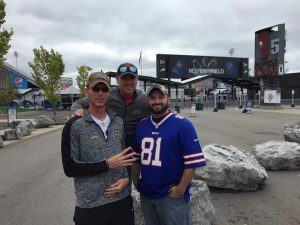 Operation Warrior Wishes would like to thank Army SGT Trendon Choe, Army SSG David Timmerman and Army SSG Jordan Brenden for their selfless service and sacrifices. You guys are appreciated and will never be forgotten!

After the game we “named our price” for a hotel so my dad could get a good night sleep before catching his early morning bus to Pittsburgh to make Warrior Wishes come true at the Steelers game.  Stay tuned for more details… 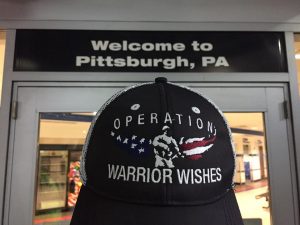